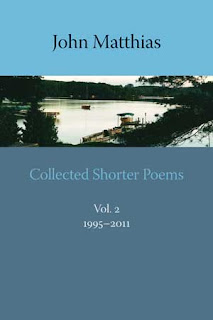 Back in March, I bought this book at the States of Independence book fair in Leicester. I started it with great enthusiasm, got sidetracked with other reading for reviews, and then picked it up again last week. I'm glad I did.

Matthias isn't a poet I knew anything about before (that says nothing about anything other than the self-guided nature of my wanderings through Poetryworld), and one thing that immediately struck me was that if these are his shorter poems, I'd like to see the longer stuff. There are some very short pieces here, but most clocks in at about the length that seems to be the standard in the UK. That's not to say it's over-written - it's sometimes sprawling in the very best sense, but that's all.

It just made me wonder about the length of poems. I'm as guilty as anyone of thinking that a piece is turning into an epic if it gets onto a second page, or past the 40-line mark (usually the limit in competitions), but maybe that's a peculiarly British thing?

Anyway, regardless of all that, it's a fine book (both the poetry within it, and as an object, which is always a plus for me).
Posted by Matt Merritt at 12:20

John Matthias has written several book-length poems, often about places, sometimes not. His best advocate is Robert Archambeau who blogs on Samizdat (I think his current post is actually a note about the Collected Longer Poems), and who's written about Matthias in his book 'Laureates & Heretics', as well as editing a collection of essays on Matthias, 'Word Play Place'. If you search for Matthias on Samizdat, you'll find a lot of very interesting criticism.

Thanks, Henry. I'll have to search out more of his work, and some of the criticism you mention.