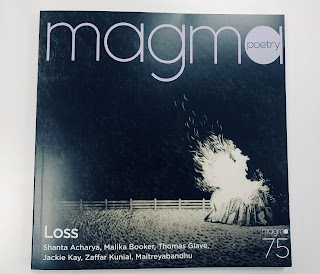 I received the new issue of Magma in the post today – No75, themed around Loss. It contains my poem Grail Birds, which was partly inspired by Tim Gallagher's fascinating book The Grail Bird, and partly by the loss of my father a year ago this Friday.

As always, it's packed with poems, reviews and articles, and I look forward to reading it over the next few days. I'll try to pick out some highlights on here when I do. 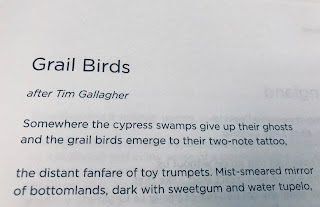 Posted by Matt Merritt at 12:32 No comments:

Poetry competitions do seem to cause quite a bit of controversy, whether because of high entry fees, the use of 'sifters' (meaning that big name judge isn't necessarily going to see your work), or because some people see the whole idea of being competitive about art wrong.

I've never had a problem with them, as long as people know exactly what they're paying for, and the money is going to support poetry longer-term, by helping with magazine or reading series running costs, for example.

Some competitions also give some sort of feedback. This could be a full critique – when I first entered the Plough Prize back in around 2003, you could pay an extra £1 per entry to get a detailed and very thoughtful analysis of your poem from the judges. It was worth entering for that alone.

But most just publish some comments from the judge or judges when they announce the winners. The usual way it's done is to say what they liked about the winning or shortlisted poems. That can have the unfortunate effect of making you think that, if your poems weren't in the same vein, they didn't like them, but it's probably the safest option.

This, on the other hand, seems pretty out of order to me. At the very least, I think the Sentinel Literary Quarterly should be making clear that if you enter their competition, the judge might well decide to be publicly harshly dismissive of your work. I think they might find themselves taking rather a hit from this, if the reaction of many poets on Facebook is anything to go by.
Posted by Matt Merritt at 11:28 No comments:

I'm not going to entirely rehash the old debate about whether song lyrics are poetry (yes, I'd say, although not the same sort of poetry you generally see on the page), but Richard Thompson is probably my favourite lyricist of all time. I hadn't realised that he was playing a 70th birthday gig at the Albert Hall, but there's an excellent interview about it and a host of other things here.
Posted by Matt Merritt at 10:17 No comments: