Busy, busy, busy, at the moment, mainly with the day job, so I haven't had a chance until now to blog about last week's reading at Ouse Muse, in Bedford.

Compered by Caroline Davies, and run by Ian McEwen, it's a long-running open mic/reading series, and the venue downstairs at the Auction Room bar, is a good one – cosy and compact, with hardly any noise drifting down from the main room upstairs.

The open mic readers were excellent, too – thoughtful poems in a variety of styles, and (and this is something I love to see at such events), more than one person read poems by well-known poets. I'm really not sure why 'cover versions' of this sort are still so rare on the poetry scene, but it's a great way of setting your own and others' work in context, or just of reminding people of some great work.

My own reading was from hydrodaktulopsychicharmonica and The Elephant Tests, plus one new poem, and I liked the format – after a 25-minute main set, I got to read a couple more poems to close the night, after the last of the open mic slots. The audience were lovely – knowledgeable and appreciative, and

Incidentally, I only have a few copies of each of those books left (and I think Nine Arches Press have the same), so contact me if you'd like a copy – they're £5 each. Now that the print runs are exhausted, they'll probably go to print-on-demand.
Posted by Matt Merritt at 14:35 No comments:

This is the weekly poem at the Oxford Brookes University Poetry Centre website , and it also appears in Sidekick Books' 2012 anthology Birdbook II: Freshwater Habitats.

The website's an excellent resource, and the four Birdbooks are packed full of brilliant poetry and illustrations, whether or not you have an interest in birds.

As for Red-throated Divers, well, this is a good time of year to see them offshore all around the UK, and diverse divers (Black-throated and Great Northern too) turn up inland, too (there are two or three Great Northerns at Draycote Water, near home, at the moment). But the best time to see any of them is in spring and summer, when they're in their glorious breeding plumage. In the UK, you'd need to be in Scotland to find any. 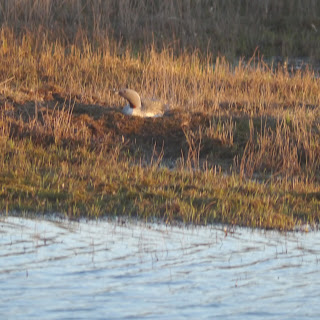 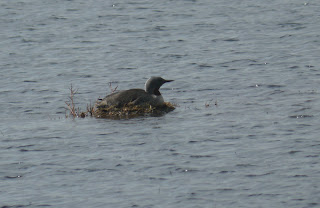 The pictures above were taken in Iceland. Apologies for the generally poor quality, but both were taken close to midnight at the end of the longest day of birdwatching I've ever experienced. The one below, of Great Northern Divers, was probably on the same day. 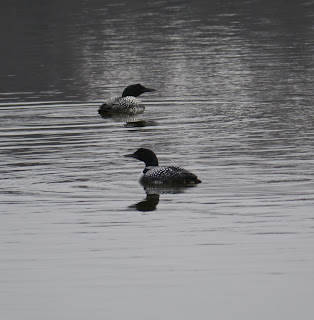 Posted by Matt Merritt at 11:09 No comments:

Two weeks today, on Wednesday, November 23rd, I'm the featured reader at Ouse Muse, in Bedford. It'll be my first purely poetry reading for quite a long while, so I'm looking forward to it a great deal (not that I haven't enjoyed reading prose).

It all takes place downstairs at the Auction Room Bar, 1 Duke Street, Bedford MK40 3HD, starting at 7.45pm, although you'll need to get there from 7.30pm if you want to sign up for one of the open mic slots.

Admission is £5, or £4 for concessions or open mic readers. I'll have copies of both my Nine Arches Press collections, hydrodaktulopsychicharmonica and The Elephant Tests, available for sale on the night, as well as a few copies of A Sky Full Of Birds.
Posted by Matt Merritt at 14:35 No comments:

You have until the end of this month to enter the Cafe Writers Poetry Competition, which this year is judged by the excellent Andrew McMillan.

Entries cost £4, or £10 for 3 and £2 for each poem thereafter. As you'll see, there are plenty of good prizes and more than one category, so see if you have something suitable.

All proceeds go towards helping Cafe Writers pay their visiting readers a fee.
Posted by Matt Merritt at 15:04 No comments: 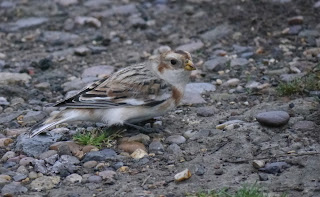 This morning, I dashed over to Kineton, where a friend had reported seeing a Snow Bunting in the last few days. She took me to fields near her house, and we quickly bumped into two dog-walkers who said they'd seen an unusual bird on the path a little way ahead. What they7 described was clearly the Snow Bunting. 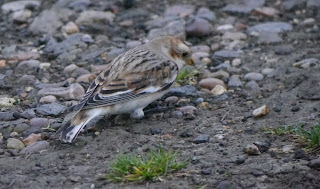 Nicci left at that point, and I walked on slowly, scanning the field margins for any small birds. No luck, except for a single Pied Wagtail. Turns out I was looking in the wrong place. I caught a movement out of the corner of my eye, a whirr of wings, and the Snow Bunting lifted from where it was, a few yards behind me, and flew past to a point 10 yards down the path. 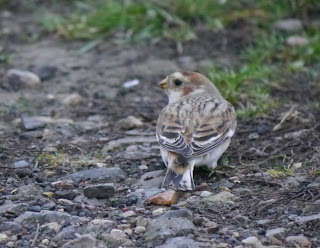 I watched for 20 minutes or so, during which it kept its back to me almost all the time, and moved in a rather crouched posture. I was down on hands and knees trying to get photos, and I was able to approach to within a few yards at times.

There's two reasons why it might have been so confiding. I've seen Snow Buntings before on top of Ben Nevis and other Scottish mountains, where they happily feed on walkers' sandwich crumbs, so it's possible that it's very used to humans. More likely, I think, is that this is a bird that has seen very few humans previously – it may well have come from Arctic Norway, and if it's a first-winter bird (I think it is, but don't really know SBs well enough), the dog-walkers and birders of the English Midlands might just not register with it as a potential threat.

By this time, it was starting to rain, and I was beginning to think about breakfast, so I left the bunting to its own devices, as little flocks of Rooks and Fieldfares streamed overhead, and Buzzards and Ravens started to soar over nearby Edgehill. Great bird to see on an inland patch – thanks to Nicci for making it happen.
Posted by Matt Merritt at 11:28 No comments:

The house at the edge of the woods: slight return - Simon Turner

It's always a good time to discover something new to read from Simon Turner – this is over at Gists & Piths, and it's rather wonderful.
Posted by Matt Merritt at 21:56 No comments:

Mark Halliday on The Hatred of Poetry

Very interesting piece here by Mark Halliday, responding to Ben Lerner's book (as he says, it's a pretty slim book), The Hatred of Poetry.

I think I'd tend to come down more on Halliday's side, but then I haven't been able to read Lerner's essay in full yet, so that's probably unfair. What I don't understand, from what I have read, is exactly why Lerner feels that poetry creates in us hopes of perfect works of art, hopes which are then inevitably disappointed, any more than any other artform does. Surely readers go to poetry for any number of different reasons, at different times? Surely we approach other artforms in the same way?

Still, I should read the whole thing before commenting further.
Posted by Matt Merritt at 09:34 2 comments: