'Map' among the year's best

Nice end-of-year list here from the Poetry School, featuring Map: Poems After William Smith's Geological Map of 1815, edited by Michael McKimm and published by Worple Press. Admittedly, I do have a vested interest, as I've got a poem in it, but it really is a superb book.

Simon Barraclough's Sunspots and Greta Stoddart's Alive Alive-O are also well worth seeking out, and would certainly make it onto my own list.
Posted by Matt Merritt at 17:06 No comments:

How iffy is If?

Interesting essay here on Rudyard Kipling's If, voted the nation's favourite poem back in 1995, and no doubt still popular today.

I'm no great fan of it, for some of the reasons listed in the essay, but it set me thinking about Kipling more generally. I've enjoyed many of his short stories, from The Man Who Would Be King to the strange and rather chilling The Wish House. I liked Kim, although I haven't read it in 20 years now, and remember thinking it was rather more complex than many critics would admit. And some of his poems (although I think Kipling himself insisted they were merely 'verse') have stayed with me.

In particular, three of his Boer War poems – Chant-Pagan, Lichtenberg, and Bridge-Guard In The Karoo. The latter, especially, is an old favourite of mine (and a great poem to learn by heart).

I also came across this, on Lichtenberg. I've always supposed that the "small wet drizzling down" was a deliberate echo of Westron Wind, and I'm just disappointed it doesn't make a little more of "Ah Christ! My country again" – Kipling often sounds like he's trotting out a rather 'stage' version of different accents, but that sounds perfectly Australian.
Posted by Matt Merritt at 13:43 No comments: 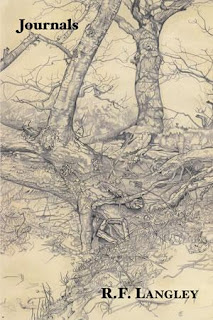 This has been my recent reading. I don't know Langley's poetry that well, although I've enjoyed what I have read, but you really don't have to know it to get an awful lot out of this terrific book from Shearsman. Langley's eye for the tiniest details of the natural world, in particular, make it constantly surprising.

There's little doubt that keeping the journals must have fed into Langley's poetry-writing process too, though, and it's made me think of keeping one myself. At the moment, I scribble notes down constantly, and I do keep a sort of nature journal, but it's haphazard. I think my New Year resolution, of sorts, will be to make time to write a little in it every day.
Posted by Matt Merritt at 09:25 1 comment:

Someone posted a link to this poem on Facebook earlier – I thought I'd share it here. I don't know enough of Gilbert's work. I must read more.
Posted by Matt Merritt at 14:00 No comments: