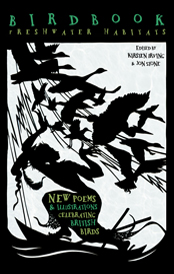 There are times when you're grateful for a hangover. Sunday was one of them - belated birthday celebrations had left me a touch, er, fragile, shall we say, and while the rain had ceased for a few hours, I was in no mood to take advantage by going out to do any actual birdwatching.

So I did the next best thing. I'd just received a copy of the splendid Birdbook II - Freshwater Habitats from Sidekick Books, so I got comfortable on the sofa and got stuck in.

Now, admittedly I am biased, as I appeared in Birdbook I, but this really is a fantastic little volume. Not only is it jam-packed with excellent poetry from the likes of Derek Adams, Jo Bell, Mark Burnhope, Gerry Cambridge, WN Herbert, Kirsten Irving, Ira Lightman, John McCullough, James Midgley, Jon Stone, Chrissy Williams and many, many more, but there's also fantastic artwork. I mean, BBI was a handsome volume, but this is really at a different level again. Maybe I'm allowing my liking for waders to sway my opinion too far, but I'm not going to apologise for that.

Rather than reviewing it, I'll try to take an in-depth look at a few of the poems soon, but in the meantime, you can buy it here.
Posted by Matt Merritt at 13:12 No comments: 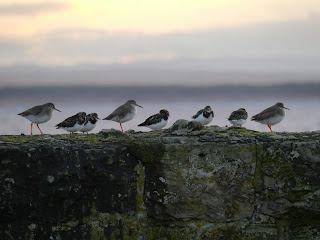 Posted by Matt Merritt at 22:07 No comments:

I've just received a copy of The Holy Place, the first chapbook from Caroline Gill (who you may know better as Caroline At Coastcard).

In fact, it's a chapbook co-authored with an American poet, John Dotson, and is the fifth publication in the Poet To Poet series from The Seventh Quarry and Cross-Cultural Communications, New York. It sounds like a great idea, pairing a British poet with a writer from elsewhere in the world, and I'm intrigued to see other books in the series.

Anyway, you can read more about it, and a little interview with Caroline, here, and I'll be reviewing it at a later date, so watch this space.
Posted by Matt Merritt at 14:10 No comments:

I received an email late last week carrying the sad news that the last issue of Umbrella has just been published.

Over the past six years it has been a consistently high-quality presence on the literary scene, and it's some compensation that the archive of its past issues will remain online for the foreseeable future.

Of course, running a literary magazine of any sort, let alone one as well presented and skilfully edited as Umbrella, is a time-consuming and often thankless task, so I'd like to say a heartfelt thank-you to editor Kate Benedict for many hours of enjoyable reading, as well as the honour of having appeared within its pages on a couple of occasions. Umbrella will be greatly missed.

Posted by Matt Merritt at 14:00 No comments:

I spent Friday and half of Saturday in Stamford, at the fourth annual New Networks for Nature symposium. The organisation has the long-term aim of establishing a festival celebrating the cultural significance of nature in Britain - on the evidence of this year, it's well on its way to doing just that.

It's really a bit unfair of me to pick out highlights, given that there were so many, and I'd be hard-pushed to find a poart of the programme that I didn't enjoy.

It all opened with Hanna Tuulikki singing entirely unaccompanied, but then she has such an extraordinary voice that no accompaniment could do it any justice. She somehow manages to make links between folk song and birdsong that really need to be heard to be believed - at the time I tweeted that she sounded like a cross between Bjork, Sandy Denny and a curlew, which I suppose at least ought to give some idea of what a unique voice she is. I have the feeling that I'm going to be looking for and downloading a lot of her work.

Conor Jameson's talk on Rachel Carson's Silent Spring, and the debt we owe to it, was really excellent. I've read his own Silent Spring Revisited (highly recommended), but there was plenty more to take away from this, not least the conviction that change can be achieved relatively quickly. The following talk, by Jim Perrin, was equally inspiring, arguing for the value of 'rapture' in our relationship with the natural world.

The panel debate, preceded by Ruth Padel reading three poems (one of her own, plus others from Clare and Larkin), considered the question "Do the British care about nature?" You wouldn't expect to come up with hard and fast answers, but there were some intriguing leads.

In the afternoon session, the hard science provided my early highlights, with Chris Hewson's look at the satellite-tracking of Cuckoos, and Nick Davies' analysis of exactly how Cuckoos trick host birds into raising their young in the first place. Bruce Pearson's talk on albatrosses was excellent too, with his artwork adding an extra dimension.

On Saturday morning, David Tipling's all too brief opening slot was superb. Most birders are familiar with David's photos (we certainly use them whenever possible at Bird Watching), but everyone in the theatre gave a little gasp at a couple of his recent photos of Hares. Katrina van Grouw is someone else I know through her work for the magazine, and her current book, The Unfeathered Bird, is terrific, but her talk about its making was something else again - the phrase "labour of love" doesn't really cover it.

I read three birdsong-related poems myself, before Charles Bennett read from his poem/song sequence The Angry Planet, as well as talking about its composition. He touched on a theme that kept re-emerging throughout the two days - how to avoid giving in to hopeless pessimism about the state of the natural world, without offering easy answers.

Finally, Hanna Tuulikki retuened, along with Nerea Bello and Lucy Duncombe, to sing Air falbh leis na h-eoin (Away With The Birds), a large-scale vocal composition inspired by the Western Isles. Suddenly my rather glib tweet of the previous day looked a bit closer to the truth - this was music that both imitated and completely transformed wader calls and songs.

There was, as I said, much more that's worthy of mention, and as always it was good to catch up with friends and colleagues (and frustrating to miss one or two others). But there was always a feeling of momentum really starting to build, and next year's event has the opportunity to develop that in a big way.

Posted by Matt Merritt at 21:30 No comments:

Over at Kumquat Poetry the other day, this rather splendid piece, Kings, appeared from Mark Goodwin. It's gleaned from my own poem Once and future kings, which appeared at Kumquat a few weeks ago.

Many thanks to Mark for taking the time to engage with my own work, and to Kumquat for showing such interest too.
Posted by Matt Merritt at 18:06 No comments: 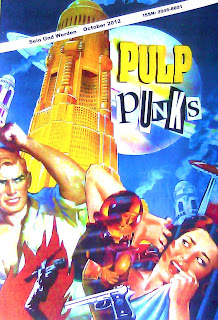 The autumn edition of Sein und Werden is out now. Titled Pulp Punks, it's hosted by Cardiff novelist and fiction writer Mark Howard Jones. I have a contribution in there, a poem inspired by Raymond Chandler's Philip Marlowe.

The night's guests are Jo Bell, Dragan Todorovic, Ian Parks and David Cooke, and as always there'll be open mic slots available on the night.

David Cooke won a Gregory Award in 1977 and published Brueghel’s Dancers in 1984. He then stopped writing for 20 years. A retrospective collection, In the Distance, was published in 2011 by Night Publishing. A new collection, Work Horses, has just been published by Ward Wood Publishing.

Jo Bell is a former Glastonbury Poet in Residence, director of National Poetry Day — and now the UK's Canal Laureate. A boatdweller and former archaeologist, her poems are about everything from Roman forts to sex on the towpath (between ducks). Current projects include a collaboration on a sequence with Martin Malone, charting the progress of a passionate relationship.

Dragan Todorovic is a multimedia artist and author of eight books of nonfiction, poetry and fiction. He’s worked extensively in print and electronic media, in Serbia (where he was born) and in Canada (where he lived between 1995 - 2005). Little Red Transistor Radio from Trieste is his first collection of short stories.

Ian Parks is the only poet to have poems published in The TLS and The Morning Star on the same day. His latest collection is The Exile’s House (Waterloo Press) and he is currently Writing Fellow at De Montfort University, Leicester.

Entry is free.
Posted by Matt Merritt at 14:19 No comments:

I'm running a poetry workshop at Attenborough Nature Reserve, just outside Nottingham, on Sunday, February 10th, 2013 - there are full details of it here on the Nottingham Writers' Studio website.

You just need to bring a notebook and pen, some binoculars (although I'll have some available to lend out), warm, dry clothing and footwear, and a lot of enthusiasm - it's for all levels of writers, and for everything from the casual TV wildlife-watcher to the hardcore rarity-chaser.
Posted by Matt Merritt at 13:50 No comments: