I've recently completed a review for Staple of C J Allen's new e-chapbook, Lemonade, which is available now from The Red Ceilings (it's in the column down the right-hand side).

I was going to post a cut-down version of it here, but I'm far too idle to do that, so you'll have to wait for the next issue of Staple to see exactly what I thought of it. Suffice it to say, though, that it's a great read - simultaneously very accessible yet satisfyingly complex, and very much the sort of coherent piece of work that pamphlets and chapbooks are particularly suited to.

I'd have to say, too, that the e-format didn't really make much difference to my appreciation of it. I printed it off, but ended up doing most of my reading onscreen. I always tend to have a few books on the go at once anyway - one each for the lounge, bedroom and, err, bathroom, and one for work - so this just added another poetry-reading opportunity to that. And it's got to be better than going on Twitter or Facebook every time I fancy a break from work, hasn't it?
Posted by Matt Merritt at 09:38 No comments: 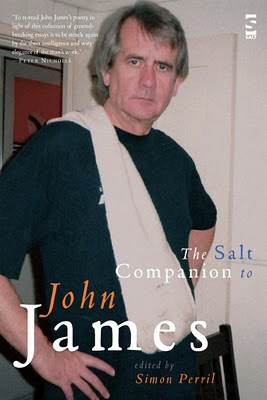 As it happens, Salt have just the thing for that, too. Buy the Collected Poems too, and you've got as good a two-volume summary of a poetry career packed with invention, exuberance and intellectual curiosity as you could ever wish for.
Posted by Matt Merritt at 13:21 No comments:

This Sunday (September 19th) at 7pm will see the first of what are intended to be monthly poetry workshops at Phoenix Square, Midland Street, Leicester.

The title of the first workshop is What Is Poetry, and the aim is to provide somewhere for new poets, or those with some experience but who are looking to move their work on to the next level, to talk about their poems and poetry in general in a friendly, informal, constructively critical environment.

It may well take a few months to gather pace, but if you think you could benefit from taking part, or help other poets benefit, come along on the night. It's free, and refreshments will be available in the cafe bar.
Posted by Matt Merritt at 16:38 No comments:

Over at his blog Other Lives, Dan Wyke has posted this fine poem by former US Poet Laureate Robert Hass. I've read a fair bit of Hass's work in anthologies before, but I look forward to catching up with a lot more when this book comes out in the UK (actually, it's tempting to jump the gun and just order the US version).

EDIT: Just noticed that Hass is one of the headline poets at StAnza 2011.
Posted by Matt Merritt at 15:28 1 comment:

There's been a couple of interesting recent dicsussions on the Magma blog - firstly about whether or not having a 'day job' is good for a poet, and secondly on poets and self-promotion.

On the first subject, I think Katy Evans-Bush's comments are the sound of a nail being struck squarely on the head - I couldn't agree more with pretty much everything she says. On the second, I think there's a lot of truth in what's being said to the effect that what's needed is for poets to promote poetry more generally.
Posted by Matt Merritt at 12:59 1 comment:

Mark Goodwin will also be reading from his latest Nine Arches collection, Shod, and there'll be live music, too. You can sign up for open mic slots on the door.
Posted by Matt Merritt at 13:08 No comments:

I'm not the most techno-savvy person around, but I'm no Luddite either. I'd have to say, though, that I really can't see why I'd ever buy a Kindle or similar device.

It's not just because I like books as physical objects. In fact, it's not got a lot to do with that at all. It's more that I can't really see what advantage an electronic reader offers over a book.

OK, so it means you can take a small library away with you on holiday without filling suitcases full of books. Why you'd want to is another matter, and this particular plus point is vastly outweighed, as far as I can see, by a bunch of negatives.

These include the expense (OK, this will probably be reduced at least a little as time goes on), and the fact that it's just one more piece of kit to lose, break or have stolen, any of which will mean considerable further expense for you to replace it. It's also another bit of kit you have to remember to pack a charger for. A book, on the other hand, is cheap and easy to replace, should you happen to drop it in the bath, leave it on the beach, or stand on it while making a bleary-eyed pre-dawn departure to the airport.

And that's how this situation, as far as I can see, differs from what happened with music when MP3 players first appeared. The predecessors to MP3s, of course, were all also bits of electrical kit that cost a fair bit, were prone to getting damaged, and were attractive to thieves. The book, on the other hand, is a simple but pretty solid bit of technology in itself, with few obvious disadvantages. Convince me that it's obsolete, and I might change my mind, but for now I can't see any good reason to change.

NB This isn't to say, of course, that I don't see the point of e-books. For some people, in some situations, they probably do offer far more real advantages, so I suppose ideally I'd want to see books offered in multiple formats.
Posted by Matt Merritt at 16:12 3 comments:

We were out on a photoshoot for work this morning, at Eyebrook Reservoir near Uppingham. While I was waiting for the others to turn up, I got good views of a Kingfisher fishing from the posts and dead trees at the inflow end, and eventually picked out a couple of Curlew Sandpipers on the muddy shore on the far side.

Once we started walking around, we found a Yellow-legged Gull, a handful of Snipe, and the long-staying Pectoral Sandpiper among a mass of Lapwings (there were huge numbers of Coots and Great Crested Grebes, too).

By the time it had really warmed up, there were loads of Buzzards on the thermals - at one point, a good dozen were up at once. Just to confuse things, two or three Red Kites were also around, plus another 'buzzard' that left us all a bit baffled. I have far too little experience of Honey Buzzard to be confident about making a definite call, and it was a frustratingly distant bird, but our photographer Tom Bailey has seen them more often and thought it was a good bet for a HB. Having checked every reference book to hand, so do I now, but I'd really want to see it again to be sure.
Posted by Matt Merritt at 15:59 No comments: