Over at WriteOutLoud, there's this excellent review by Neil Leadbeter, of Assembly Lines, the first poetry collection by Jane Commane (who is of course also the driving force behind Nine Arches Press). It's out now from Bloodaxe Books.

There's plenty else to browse on the site, too – a poetry gig guide, profiles and blogs among them.
Posted by Matt Merritt at 08:46 No comments: 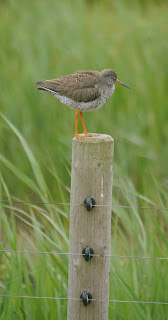 And one more wader from Minsmere, the eternally nervy Redshank, although this one laid off with the alarm calls for a while to preen and sleep on a fencepost in front of one of the hides. They're a familiar sight on most wetlands, of course, but that doesn't mean that they're not worth a second look.
Posted by Matt Merritt at 08:51 No comments:

The balance between bat and ball

England's utter destruction of Australia in the 3rd one-day international at Trent Bridge on Tuesday (Richie Benaud would almost certainly have said "It's absolute carnage out there" at some stage during it), has sparked a lot of debate online and on Test Match Special about whether or not there needs to be some evening up of the balance between bat and ball in this format of the game.

The straightforward answer is yes. As Jimmy Anderson said on the commentary, if every game is a high-scoring big-hitting contest, it all starts to blur into one. Many of the best one-day games I can remember have been low-scoring, tense affairs. Derbyshire's 1981 Nat West Trophy Final win. India's 1983 World Cup Final win. And of course, the 1999 Australia vs South Africa World Cup Semi-Final – for my money the best one-day match ever played.

What's annoying, though, is that this only ever comes up when England dish out a hammering. Yes, the pitch was flat and favoured batsmen. Yes, the Kookaburra balls used gives bowlers no assistance whatsoever. But it's the same for both sides. Australia won the toss and declined to use the pitch when it was at its best for batting. They also bowled poorly, let's be honest, while England were excellent in the field. Adil Rashid and Moeen Ali showed there was something in the pitch for spinners – more fool the Aussies for picking only one frontline spinner, leaving out Nathan Lyon, their best option.

When, in the past, England's one-day side has taken thrashing after thrashing on flat pitches, the pundits have been quick to say that they need to find bowlers who can come up with something different on such surfaces. Now we have, and now we've found batsmen who can take the fullest advantage of such friendly surfaces, we're being told that the rules need to change.
Posted by Matt Merritt at 08:51 No comments: 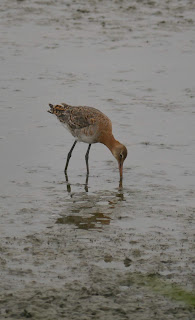 There were large numbers of Black-tailed Godwits at Minsmere RSPB, in all their breeding finery. Presumably these are birds that simply haven't made the journey to their northerly breeding grounds, although a few might also be failed breeders that have already returned. Whichever was the case, they were a pleasure to see – I love waders anyway, but these are among my favourites.

I do wax lyrical about waders in my book A Sky Full Of Birds – it's available to buy here, or you can use the email link on the right to get a copy direct from me (I'll even sign it if you like).
Posted by Matt Merritt at 08:54 No comments: 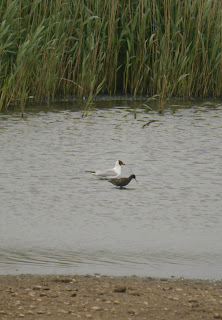 Even by my standards, that's a pretty ropey pic, but it's the best I could do from long distance, craning over several people in a crowded hide. It's a male Spotted Redshank in full breeding plumage, so different from the way I have generally seen them in the past, in winter plumage.
Posted by Matt Merritt at 08:52 No comments: 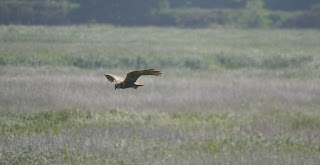 Also very much in evidence at Minsmere RSPB were Marsh Harriers. They're a common enough sight in the Fens close to our office, too, but it's easy to forget that 40 years ago, when I was just starting to get interested in birds, they were very rare indeed. Even now, there are fewer breeding pairs in the UK than there are breeding pairs of Golden Eagles – it's just that the Goldies are harder to see because they're in much more remote, inaccessible areas. But anyway, the return of Marsh Harriers are proof that organisations like the RSPB are making a real impact in some areas - we just need to start paying more attention to the habitat everywhere else.
Posted by Matt Merritt at 08:50 No comments: 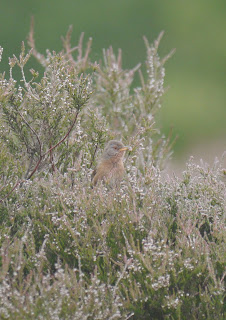 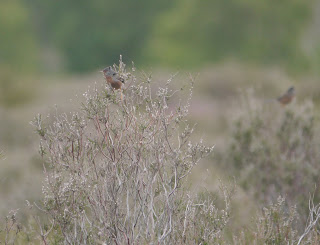 Posted by Matt Merritt at 14:39 No comments:

Ledbury's always full of excellent poetry, and this looks like one of the highlights of this year's programme. Two great poets whose work carries a distinctive Midlands flavour (and there's been far too little of that over the years).

There's lots more to enjoy there, too - have a browse here.
Posted by Matt Merritt at 10:50 No comments: