April 21st (Thursday just gone) was World Curlew Day. Curlews (or Eurasian Curlews to give them their full name) are one of my favourite species, but sadly are in steep decline. In the last few years, they've disappeared from a couple of areas where they previously bred on my old local patch, and the news isn't generally good elsewhere. Related species such as Whimbrel also face pressures, and of course the Slender-billed Curlew has effectively gone extinct within the last 20 years.

All of which means World Curlew Day is a thoroughly good thing. One thing I learned on Thursday was that the date was chosen, according to the Welsh Ornithological Society, as it's the feast day of the 6th century Welsh saint Beuno, who blessed the birds and said that they should always be protected. That sort of thing is a bit of a recurring theme with Dark Ages saints – St Cuthbert, for example, was supposed to have protected Eiders, and was also tended to by Ravens and Otters, among others.

Among other things, St Beuno is supposed to have been to have been so appalled to hear the English language being spoken that he went as far west as he could (the Llyn Peninsula) to found a monastery and get away from the uncouth Germanic invaders. I wrote a poem about it, that appeared in my second collection, hydrodaktulopsychicharmonica.

PS I'll try to post the poem some time soon, but I've mislaid my copy of the book.

Posted by Matt Merritt at 11:51 No comments:

The death of Frank O'Hara

This is probably the first time (and will probably be the last, too) that I'll link to a Vanity Fair article on Polyolbion, but this is well worth a read.

Frank O'Hara's influence on English language poetry on both sides of the Atlantic over the last half-century can't be underestimated, but I'd never really read anything much about the circumstances of his tragic death before. It's all here, and Ken Ruzicka's dignity in dealing with such awful events is only to be admired.

Posted by Matt Merritt at 14:41 No comments:

A bit of a change of tack – this article was flagged up on Twitter today. I found it fascinating, partly because of the recent family history research that I've been doing, I think, and partly because I'm unscientific enough to be staggered by it. I suspect someone with more of a grounding in the subject would be considerably less surprised, just as they are generally less surprised by somebody finding out that they're descended from Edward III, or similar.

Posted by Matt Merritt at 07:19 No comments: 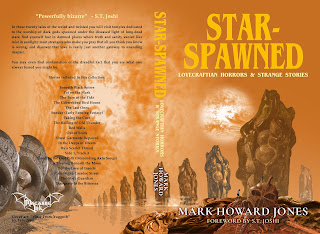 My old friend (and former boss – he was a good one) Mark Howard Jones has a new book out for all those of you who enjoy a few eldritch horrors (as I do). Star-Spawned: Lovecraftian Horrors & Strange Stories is available here, and brings together his Lovecraftian and weird fiction from the last decade or so. There's a foreword by Lovecraft expert, S T Joshi, too, so what are you waiting for?
Posted by Matt Merritt at 09:00 No comments:

The Vanishing Earth: A Reminder

Just a reminder that I'm reading with Chase Dimock as part of the Cheltenham Poetry Festival, on Monday, May 16th. The event – The Vanishing Earth – is themed around extinction, and the threats that the natural world currently faces.

You can book tickets here, and there are several other events still available throughout the summer.

Posted by Matt Merritt at 08:00 No comments:

I've taken a break from posting for 10 days or so because I was up in Scotland co-leading a readers' holiday, preceded by a couple of days of family history research around Portsoy (where my great-grandmother on my dad's dad's side grew up).

I had some success with the latter – I've found three leads which should take me a fair time to follow up. And as always up around Strathspey, the Cairngorms, the Moray coast and the Black Isle, the birding was excellent.

Golden and White-tailed Eagles were great to see, as always, as were lekking Black Grouse, lots of Snow Buntings, Slavonian Grebes in their glorious breeding plumage, and Black-throated Divers in their finery.

But the highlights were two White-billed Divers, off Burghead and Roseisle. It's a new species for me, and it's really pretty hard to see in the UK. Small numbers winter off the coast (mainly off Scotland), and in recent years it's emerged that many of them gather in the Moray Firth, mainly off Portsoy and Cullen, as they start to head back north.

Posted by Matt Merritt at 15:25 No comments: