I have a lot of doubts about 'prize culture' in poetry generally, but in recent years, the Forward Prize shortlists have become a great deal more diverse, and they deserve a lot of credit for that. Anything that gets a wider range of poetry and poets into the public eye has to be worthwhile. So, congratulations to all Monday night's winners - plenty of future reading for me to do.
Posted by Matt Merritt at 12:02 2 comments:

Autumn Poetry @ Upstairs at The Western

There's a special one-off event celebrating new poetry with Nine Arches Press and the Centre for New Writing at the University of Leicester, on Monday, 5th October, 2015.

Alistair Noon was born in 1970 and grew up in Aylesbury. Besides time spent in Russia and China, he has lived in Berlin since the early nineties, where he works as a translator. He has published poetry, including translations from German and Russian, in nine chapbooks from small presses, a collaboration with Giles Goodland (Surveyors' Riddles) and Earth Records (Nine Arches, 2012, short-listed for the Michael Murphy Memorial Prize). The Kerosene Singing is his second full-length collection.

Myra Connell grew up in Northern Ireland and now lives in Birmingham where she works as a psychotherapist. Her stories are published in various places, including the Tindal Street Press anthologies, Her Majesty and Are You She? Her poems have appeared in Under the Radar, Obsessed with Pipework and The Moth. Her first pamphlet was A Still Dark Kind of Work (Heaventree Press, 2008), and her second, From the Boat (Nine Arches, 2010). Her debut full collection is House, also just published by Nine Arches Press.

Jonathan Davidson’s new collection: Humfrey Coningsby - poems, complaints, explanations and demands for satisfaction (Valley Press, 2015) purports to be a collection of poems written by the 16th Century traveller and other observers, with a curious contemporary ring to it. It may be. It may not. We may never know. What we do know, is that Jonathan Davidson is a citizen of Coventry and a poet and writer of radio dramas

Rennie Parker comes from West Yorkshire but now lives in Lincolnshire, a county which influenced the poems in her latest collection, Candleshoe (Shoestring Press, 2014). She is currently writing towards a booklet, The Complete Electric Artisan, and recently released two short novels as Kindle e-books, Trust and A Perfect Vicarage Affair.

Entrance is FREE, but you should book tickets to be sure of entry - click here or visit https://www.eventbrite.co.uk/e/autumn-poetry-upstairs-at-the-western-tickets-18631285677
Posted by Matt Merritt at 07:44 No comments: 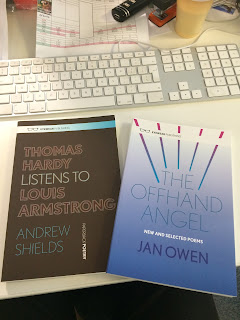 I recently signed up to become an Eyewear micro-patron - for £10, you get two of the press's titles, 40% off other titles, and exclusive news and invites. I was keen to buy Andrew Shields' book anyway, so it was a bit of a no-brainer - great value. They are, it should be pointed out, really nicely designed books, too. I look forward to reporting back on them soon.
Posted by Matt Merritt at 13:36 No comments:

Terrific blogpost here by Richard Skinner, on how he came to appreciate the poetry of Geoffrey Hill, and also about the joy of discovering a much-sought volume in a secondhand bookshop. Hay-on-Wye, of course, is the best place in Britain for such happy accidents, and the Poetry Bookshop in particular is an absolute treasure trove. I'm long overdue another visit.

My own discovery of Hill's work was somewhat similar. I read a handful of poems, including parts of Mercian Hymns, in a university textbook of my sister's, then read the whole of that collection when I was at university myself – I was trying to dig out stuff for an essay on the 8th century Mercian church, and the computer suggested it in the search.
Posted by Matt Merritt at 09:23 No comments:

Corbyn and the anthem

Good blogpost here on why Jeremy Corbyn should be applauded for not singing the national anthem - he'd have been a hypocrite to do so, he showed all the respect appropriate to the occasion anyway (which is more than some of the singers did), and thirdly, it's a lousy and absurd anthem anyway.

The real debate, of course, ought to be why we can't have an anthem that isn't offensive to Scots, Catholics and republicans, but I don't suppose we'll have that any time soon. The right-wing press, who have generally had a strange way of showing how much they respect the monarchy in the past, have their own very obvious agenda here. Incidentally, I wonder how many of their 'journalists' and photographers were singing? I wonder, too, how many of those who have criticised Corbyn could sing the anthem in its entirety?
Posted by Matt Merritt at 12:11 No comments:


"How can a ball hurt you? It's only on you for a second". Not sure if that, like so many other remarks attributed to Close, is apocryphal, but it certainly sums up his attitude.
Posted by Matt Merritt at 13:07 No comments:

"Oddly pointless...but utterly lovely". I think that's probably a fair assessment of Stuff Like That There, Yo La Tengo's new album, which attempts to recreate the laid-back, semi-acoustic vibe of their classic 1990 record Fakebook. Not that pointlessness ever worries me too much where pop music is concerned - I don't mind someone trying to change the world with a song once in a while, but first and foremost, it's supposed to be entertainment, isn't it?
Posted by Matt Merritt at 08:45 No comments:

As always, open mic slots will be available on the door, and entry is free. And also as always, it's a good idea to get there early to get a good seat.
Posted by Matt Merritt at 12:13 2 comments:

Nice obituary of the poet PJ Kavanagh here – I had no idea that he had played the Nazi priest on Father Ted! Possibly my favourite episode of all, and that's saying something when talking about such a consistently great programme.

Interesting to read about his meeting with the poet Patrick Kavanagh, too. They're both poets whose work I like a lot, although it doesn't sound as though the older man would have been a barrel of laughs in person.
Posted by Matt Merritt at 16:04 No comments: