'Two ravens flew with them all the way'

Driving to work this morning, just a few miles from home, I saw two Ravens flying over the road at Napton-on-the-Hill.

Their identity was obvious from the wedge-shaped tails, the long, narrow wings, and the size, close to that of a Buzzard. As I got closer, the heavy bills were there, too, and just a hint of the shaggy throat feathers.

A few years ago, to see a Raven in the Midlands was still a pretty big deal. Then pairs started to move into many of the granite quarries around Charnwood Forest (I was living in Leicestershire at the time), where they co-habited with another species that has been making a comeback, the Peregrine. The two species often live in close proximity, and the Ravens seem to delight in annoying the raptors with close approaches and dive-bombing. I've never seen a Peregrine actually have a go at a Raven, though, perhaps because there is usually much easier prey to hand.

Now Ravens are getting reported from all over the place. They breed on the edge of Peterborough, in countryside that you'd never have associated with them just a short time ago, but which they must have inhabited in the past. John Clare, whose home village of Helpston is just a couple of miles from the nest site, mentions them more than once. Near my own home, they're regularly seen around Edgehill, but they've probably spread even further than that.

The pair this morning were flying purposefully and straight, with none of the aerobatics you often see from the species. Once, in Extremadura, I watched four Ravens flying high over the plain that stretched for 20 miles in every direction. As if to relieve the monotony of the journey, all four suddenly flipped onto their backs, then back again, before carrying on their way.

But anyway, Ravens are right up there in my birds top 10, and seeing them always reminds me of this passage from Njal's Saga, greatest of the Icelandic family sagas. The whole historical and mythological aspect of Ravens is, I think, one of the reasons I like them so much.

I didn't intend this post to deteriorate into a bout of shameless self-promotion, but I should also mention that there's a chapter on Ravens in my book A Sky Full Of Birds, which you can read about and order here.
Posted by Matt Merritt at 12:00 No comments:

Have blogs had their day?

Or has this blog had its day, more to the point? Visitor numbers have been showing a slow but steady decline over the last year or so. I've not been great at updating it in recent months, and when I have I haven't always been able to write the occasional longer pieces that I'd like to, so I suspect that it's not really doing anything that Facebook and even Twitter couldn't do just as well.

I'd be interested, then, to know if there's anything that people would like to see more of on here. Not that I can guarantee that I can do anything about it, of course! But still, I'll try.
Posted by Matt Merritt at 08:55 4 comments:

Back in my schooldays, the pre-internet information wasteland of the 1980s (Ceefax seemed impossibly hi-tech), I used to look forward to the announcement of the England cricket touring team with great eagerness. It was a landmark – after two or three weeks back at school, on some warm, hazy September day, you'd hear the news on the radio, and you'd always be surprised by one or two of the names.

That wasn't always a good thing. There was a time when a single eye-catching performance in the Gillette Cup (later NatWest Trophy) Final at the start of September could propel you into the winter tour party. Roland Butcher did it in 1980, but there were others, and the players involved rarely went on to have long international careers.

These days, there are far fewer surprises. Consistency of selection has generally been a good thing and has played its part in England's generally better performances since the turn of the century (some good captains and coaches, central contracts, and more competitive county cricket have also helped). But I can't help missing the old days a bit, when a couple of names would always send you scurrying to the bookshelves to dig out the Playfair Cricket Annual and swot up on the players chosen.

This year, there's room for a few left-field selections. Alex Hales has opted not to tour Bangladesh, which leaves a spot for a new opener (he's quite possibly have been dropped anyway), and the struggles of England's middle order means there are other batting places up for grabs too. A third spinner will be needed.

So, I turned my mind to selecting my own touring party for Bangladesh, ahead of tomorrow's announcement. I'd keep pretty much the same squad for the India tour too. The first XI would be my starting line-up for the first test.

Leach has come through strongly this season, although I think it's unlikely that we'll play three spinners in any one match. Robson looks a better player now than when he was first selected for England, and Duckett will certainly play for England sooner or later.

I wonder how many I'll have got right?
Posted by Matt Merritt at 10:30 No comments:

Well, if you do, the Poetry School wants to hear from you ASAP. You'll even get paid £60 a time. The full details are available here, and it'll be interesting to see what comes of it – as they say, there's a real need for thoughtful, honest reviews of poetry out there, especially of some of the writers that otherwise slip below the radar.

It reminds me – I've got a couple of reviews to post myself, when I get a minute, so watch this space. I'll be paying myself the standard fee of a Strawberry Cornetto.
Posted by Matt Merritt at 16:00 No comments:

Autumn: an anthology for the changing seasons, edited by Melissa Harrison and sold in aid of the Wildlife Trusts, is reviewed here by Mark Avery, former conservation director at the RSPB and now tireless campaigner on wildlife issues, most notably the persecution of Hen Harriers by the driven grouse-shooting industry.

It's a lovely book (as are the first two in the series), and in a very good cause too, so another one for the Christmas lists for lovers of wildlife and literature alike.
Posted by Matt Merritt at 09:19 No comments: 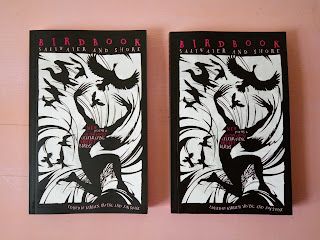 This rather splendid volume, the fourth and last in Sidekick's series covering all the birds of Britain, is out today. You can find out how to buy it here.

There are poems inspired by all the species of saltwater and shore (so a lot of my favourites are in there), with superb illustrations to accompany them too. It's every bit as good as the other three books in the series, and perfect for anyone with an interest in birds, or poetry, or both.

Of course, I would say that, because I wrote the foreword, but if you don't believe me, have a look at the Sidekick website.
Posted by Matt Merritt at 13:15 No comments:

Martin Stannard's poems for the young at heart (Leafe Press) is reviewed by Steve Spence for Stride here – you can also find out more about it and Leafe's other excellent publications here.

Incidentally, over at Gists & Piths, Simon Turner has his response to Appendix 2: A Test For Poets, from Martin Stannard's book. You might actually need the book to get the full sense of it, but then you were going to buy that anyway, weren't you?
Posted by Matt Merritt at 09:25 No comments:

The submissions window at The Poet's Republic is open until the end of September, with issue 4 due out in November. Nell Nelson of HappenStance Press is guest editor this issue, which pretty much sounds like a guarantee of high quality, and if you read the submissions guidelines you'll see that this Scottish mag is casting its net pretty far and wide stylistically and in terms of subject matter.
Posted by Matt Merritt at 11:49 No comments:

Mark Goodwin - Along A Line

This is a rather wonderful blog post by poet Mark Goodwin – make sure you watch the video at the end, too. Mark's books include a 2014 collection from Longbarrow Press, Steps, that explores walking, climbing and balancing, among other themes.
Posted by Matt Merritt at 10:41 No comments:

An evening of poetry at Kenilworth Arts Festival

A week on Friday (September 16th), this rather splendid event is taking place as part of the Kenilworth Arts Festival. David Morley will be joined by Sarah Howe, Luke Kennard, Jo Bell, Claire Trevien and Jonathan Edwards at the Talisman Theatre for an evening of poetry. Follow the link for details of how to book tickets.
Posted by Matt Merritt at 10:10 No comments: