I'm delighted to see that Clare Best's Excisions, from Waterloo Press, is on the shortlist for the Seamus Heaney Centre Prize for best first collection. It's a terrific book, and thoroughly deserves to be on there. I should get my act together and finish and post the review of it I've been writing.

Nice to see Waterloo getting some recognition on a shortlist, too - they've got a strong and varied stable of writers, and their books are beautifully produced.
Posted by Matt Merritt at 16:32 No comments:

Just came across this at the Seren site - I was a big fan of Damian Walford Davies's collection Suit Of Lights, and I'm a sucker for all things 17th Century, so this is a must-buy.
Posted by Matt Merritt at 14:13 No comments:

I've been out of circulation for a few days, so I'm just going over a few things I missed, and that you might have, too.

Monday night's Shindig at The Western, in Leicester, featured the launch of C J Allen's new Nine Arches Press collection, At The Oblivion Tea-Rooms. There's a sample poem from it here at Litterbug (and the New and Selected from Leafe Press that's mentioned there comes highly recommended, too).

Meanwhile, at the HappenStance blog, Helena Nelson has some very interesting things to say about selling books through Amazon. I try to buy direct from presses where I can, or at readings, but I have taken the lazy way out at times.

Finally, my review of Carcanet's An Andrew Crozier Reader is at the Magma blog now - it's a book I reccomend highly.

Posted by Matt Merritt at 09:15 No comments:

Other features include Victoria Field remembering Peter Redgrove, Gerry Cambridge on Robert Frost and Scotland, David Cooke on Derek Mahon, fiction by Alessandra Lavagnino (translated by Adam Elgar), and art by Jeffrey Blondes and others.
Posted by Matt Merritt at 12:02 1 comment:

Leicester poet Roy Marshall, whose excellent chapbook Gopagilla is out now from Crystal Clear Creators, has very kindly chosen my poem Variations On A Theme By J A Baker for his Favourite Poem of the Week column.

He's also provided a link to an article about Baker, who's something of a hero of mine. I've actually just been reading Conor Jameson's excellent Silent Spring Revisited, which starts with his discussion of whether Baker was in fact seeing escaped falconry birds as well as wild Peregrines (we published a version of this in Bird Watching last year). Far from diminishing Baker's achievement, Conor puts Baker's extraordinary work into the context of an era in which modern conservation movements were just emerging, after the massive numbers of bird fatalities caused by unrestricted use of pesticides.

My first full poetry collection, Troy Town, is now back in print from Arrowhead Press, and you can buy copies directly from them here. It's a handsome-looking hardback, and costs just £8.99.

Posted by Matt Merritt at 12:24 No comments: 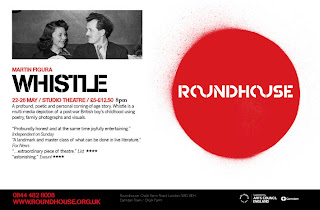 Martin Figura's poetic coming-of-age tale, Whistle, is on at the Roundhouse, Chalk Farm Road, Camden, London, from May 22nd-26th at 8pm each day. There are clips and previews here, and booking information here. David Morley, writing in Magma, described it as "magnificent and genuinely haunting", while Jackie Kay called it "moving, brave and unsentimental" - I certainly couldn't say it any better.

If you'd like to get familiar with the extraordinary story behind the show beforehand, or if you're unable to get to the show, the Arrowhead collection Whistle is available here.

Posted by Matt Merritt at 11:24 No comments:

The pros of prose

I mentioned a couple of weeks ago that I’d been reading Neil Roberts’ fine biography of Peter Redgrove, A Lucid Dreamer. In it, he talks about the strict routine of drafting and revising poems that Redgrove developed later in his career, which often involved starting by writing a prose draft.

There’s an apparent risk in such a strategy, of the final poem appearing to be a prose piece chopped up into lines, although anyone who knows Redgrove’s work well (I’ve read a smattering of his collections in the past, and I’m now enjoying the Collected-that’s-actually-a-Selected) will rightly point out that it’s a charge you’d struggle to make stick with a writer as musical as him. For us lesser mortals, though, it’s a far more real danger.

But anyway, having reached rather an impasse in a number of poems I’ve been working on, I thought I’d try it. I started from scratch, got everything I had down into the prose drafts without stopping to worry too much about structure, narrative coherence or even consistency of tone, and then put them away for a few days.*

Having looked at them again over the last couple of days, my immediate response was that new ways into each poem seemed to have opened up - in all but one case, a far better opening line than the original presented itself from deep in the heart of the prose, while in the other, the opening line got changed almost beyond recognition. They're all still a long way from being finished, even now that I've written a verse draft of each too, but they all feel far livelier, and far more open to taking an unexpected turn (which for me is always the interesting part of writing a poem). Some might even stay as prose.

I'd guess this might have happened in large part because restarting them in prose helped break that attachment that the poet always has to the original kernel of the poem - no matter how many times you remind yourself that nothing is sacred, it's very hard during the revision process to ditch what can feel like the nuggets of inspiration that sparked the poem in the first place (they're not, of course, they're just the way you first chose to shape that inspiration).

Whether I'll carry on with this method I'm not sure, but if nothing else it's reminded me that getting out of old habits and trying something different in the writing process is always worth a go.

* I think Redgrove actually left his drafts much longer, and was very strict about not looking at them again until a certain time had passed. I'd like to develop that sort of patience.
Posted by Matt Merritt at 12:35 7 comments: