Time for the annual reminder that it's nearly time for States of Independence 2013 – the fourth annual independent press book fair takes place at the Clephan Building, De Montfort University, on March 16th. It's advertised as having a greater emphasis on fiction than previously, but it's always worth attending, with a good variety of presses and events. Make sure you've got a few quid on you, though, because it's always full of books that you really feel you can't do without.
Posted by Matt Merritt at 16:49 No comments: 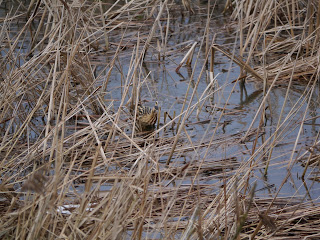 I thought briefly that the Slimbridge Bittern was going to do the head-up, I'm-here-but-I'm-not-here routine, but in the end he was too busy feeding to be bothered by the attention he was getting.
Posted by Matt Merritt at 16:47 No comments: 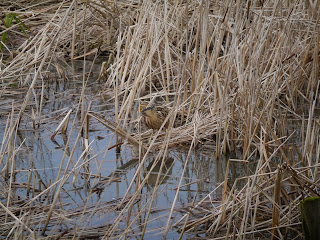 I've not seen many Bitterns in the UK over the years, and I've certainly never had better views of one on the ground than a few weeks ago at Slimbridge WWT. Much of the reserve was frozen the first day I was there, forcing this bird into more open areas than he'd usually use. He was still hard to pick out at times, though, despite a hide-full of birdwatchers training their binoculars and scopes on him. By the second day, the thaw had set in, and he was back deep within the reedbed.
Posted by Matt Merritt at 16:42 No comments:

Emmonsails Heath In Winter: an update

Sam Ward kindly emailed to point out that John Clare did, in fact, see kites around Emmonsails Heath, and Helpston.

He adds: "Identifying which bird Clare's referring to isn't always easy, as puddock can mean kite or common buzzard. In his bird list, though, he notes differences between the flight of the buzzard and the kite."

That suggests that he was familiar with both, so the gamekeeper-accelerated decline of both species must have really set in a little after his time. Buzzard, incidentally, is another bird name that was applied across several species, all of them large and with an appetite for carrion, at different times, which is why it's used as a name for vultures in North America.
Posted by Matt Merritt at 15:50 No comments: 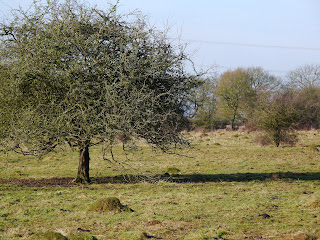 Well, Ailsworth Heath, as it now is, this morning. It's part of Castor Hanglands National Nature Reserve. The weather was glorious, but it was relatively quiet, with no sign, surprisingly, of John Clare's "coy bumbarrels" flitting down the hedgerows. No Woodcock or Grey Heron, either, and only one or two Fieldfares and Carrion Crows.

But there are plenty of half-rotten trees, just as Clare described, and that's what makes it a good place for Lesser Spotted Woodpeckers, Marsh Tits, and the like. This morning there were only Great Spotted Woodpeckers drumming, plus a couple of Nuthatches noisily explaining their name by hacking away at hazelnuts that they'd wedged in tree crevices.

There are scrubby, messy meadows like the one above, too, making it a haven for warblers in spring, plus otherwise hard to find species such as Nightingale and Cuckoo. Redstarts go through on passage, too, and around the fringes there were a few Yellowhammers present this morning. All of them birds that Clare wrote about again and again, and evidence of at least some continuity.

I got to wondering whether Clare would have seen Buzzards there (one was mewing loudly today), or if their persecution had already driven them out in his day. The Red Kites that are overhead now would certainly have been an unfamiliar sight to him, having long before retreated into upland fastnesses.

And finally, I'm betting he didn't have to deal with these fellas. They were more than a little curious. Handsome, though. 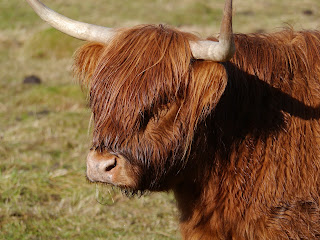 The threatened snow held off until early evening, but there was plenty of rain at Attenborough Nature Reserve, just outside Nottingham, yesterday morning. It didn't deter the workshoppers (workshoppees? worksoppers, even, given which county we were in?), and it didn't seem to deter the birds, either. For all the cold and damp, they had evidently decided that spring was just a few days away, and were determined to be ready for its arrival.

There was plenty of Mallard activity, much of it involving two males pursuing a single female. The less than delicate art of courtship among Mallards has been well documented, so I won't go into it here, but we did see an atypical pair, in which the female stood on a large stone, staring off into the distance with a bored look on her face, while the male paddled around her trying to get her to notice.

The other ducks were making more effort. A group of male Teal displayed to their intendeds, and here and there a male Goldeneye did their head-back display. Goosanders were a nice spot, too, with good numbers of males and females around.

Grey Herons were already on their nests, while among the smaller birds, we came across a pair of Robins indulging in some display (with Robins, anything that isn't full-on aggression is probably foreplay). Great Tits were sounding their two-note spring siren all over the place, and as well as busy little tit and finch flocks, we came across an incredibly confiding Goldcrest.

All of which meant we had plenty to work with once we got back to the visitor centre. After desperately-needed hot drinks and some splendid cakes, we took birds, birdsong, birdwatchers and migration as our starting points, and wrote. It's always a privilege to hear writers' work in its earliest stages, and this was no exception - I'm grateful to all who attended for their enthusiastic and energetic responses.

Even in the brief time we had, there was some very imaginative and thought-provoking work aired, and over the next two or three months, we plan to turn this into some collaborative poetry and prose on a blog that I'll create and link to from here. We also plan a similar event in early autumn, when hopefully it might be a bit warmer and dryer, so keep watching this space for further news.
Posted by Matt Merritt at 13:20 No comments:

I'm going to be leading an open-air poetry workshop at Attenborough Nature Reserve, just outside Nottingham, this Sunday, February 10th. We'll be trying to translate birdsong into poetry, track down long-distance travellers, turn the tables a little by watching the birdwatchers, and map out our experiences.

It all starts at 9am - we're meeting at the Visitor Centre cafe - and will run until around 2pm. It costs £15 (£12 concessions), and for enquiries and booking, email admin@nottinghamwritersstudio.co.uk or call 0115 959 7947.

You don’t need any previous experience of watching wildlife - just bring warm and waterproof clothing and shoes, pens and paper, bags of energy, and a pair of binoculars if you have them (but I'll have some spares to lend out on the day, so don't worry about that too much).
Posted by Matt Merritt at 12:59 No comments:

A few quick words about Wednesday night's reading in Headingley – we had a very attentive and appreciative audience, and wonderful fellow readers in Roy Marshall, Maria Taylor, Deborah Tyler-Bennett, Gareth Durasow and River Wolton. I've got to the stage where I like reading in public anyway, but by any standards this was as enjoyable an event as I've done.

It was heartening, too, that the three newer poems I read got a good response, because I'm always nervous about reading fresh work. I'm hoping to get out and about and do a lot of readings this year, ahead of and then following on from a new collection from Nine Arches, so it was a good start.

Oh, and kudos to Gareth for getting a mention of Cthulhu into a poem. It's long, long overdue.
Posted by Matt Merritt at 13:42 No comments: