There's an awful lot of rubbish on Facebook and Twitter, but Andy Jackson's Otwituaries manage to be funny, touching, and genuinely poetic (not that that should come as any surprise). I only discovered yesterday that they're also on this blog.
Posted by Matt Merritt at 04:46 No comments:

I make no apology for sending you in the direction of Michelle McGrane's fine blog Peony Moon, for the second time in a couple of weeks.

The latest post is this remarkably honest and enlightening interview with Helen Ivory on the writing of her new Bloodaxe collection, Waiting For Bluebeard. The specifics are fascinating, but there's also a lot there that applies to the whole creative process more generally.
Posted by Matt Merritt at 13:12 2 comments: 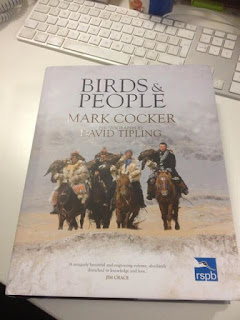 I'll give you fair warning - I'm likely to blog about this book a lot over the next year or so. It arrived in the office on Friday and I can honestly say no review copy's ever been so eagerly awaited. Eight years of research and writing have gone into it, and at first glance it's truly extraordinary.

Mark Cocker's Birds Britannica has long been a favourite of mine, and here he does for the birds of the world what he previously did for the species of these islands. Which is to say, considers them in the round, and especially in terms of their interaction with humans. Folklore, myth, literature, science, anthropology and birdwatching mingle in these pages, and he continues to manage the difficult balancing act between getting over a wealth of hard information, and maintaining great readability.

This time, there's the added bonus of David Tipling's superb photography - it makes it a book that you can't stop flicking through every time you've got a spare moment.

Anyway, I'll be returning to the subject soon, but keep an eye out - it's released this summer.
Posted by Matt Merritt at 12:41 2 comments:

Interesting blog post here, at the Sidekick Books blog, on the popularity or otherwise of poetry. In the light of Salt's announcement this week that they'll soon be ceasing to publish individual collections of poetry, concentrating instead on their Best British Poetry anthology series, it's an issue that's bound to get a lot of discussion in the coming weeks. Not sure about the whole 'reading poetry while sitting on the toilet' debate, though...
Posted by Matt Merritt at 12:39 No comments:

Browsing through my blogs list this week, I enjoyed reading this post on Andrew Shields' always excellent blog. It helps that You Are The Everything is just about my favourite REM song, too.

Meanwhile, over at the Magma blog, there's Andrew Philip's thoughtful review of John F Deane's Snow Falling On Chestnut Hill. I've seen plenty of online debate recently about what a poetry review should do - this one makes me want to read more of the poetry in question, and to find out more about the poet. That's what I'm looking for, really.
Posted by Matt Merritt at 13:07 No comments: 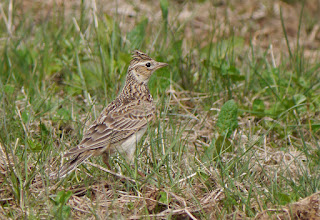 Posted by Matt Merritt at 08:23 No comments: 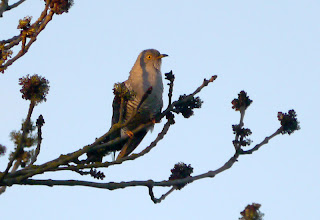 Down at a local nature reserve last weekend (well, it's an old sewage works, to be exact), I heard the strange, bubbling call of a female Cuckoo, something I haven't heard locally in a long time. In no time at all, two males were in attendance, replying with their familiar song. One remained fairly elusive, although I caught glimpses, but the other took up position on a tree near me, so despite the failing light I was able to get a few pics. 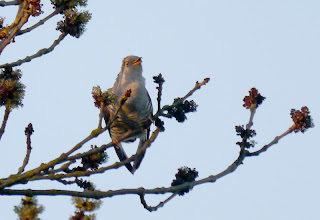 When I went back on Monday night, one of the males was still around, singing constantly, and there was an occasional distant second male, but neither sight nor sound of the female. It's a site with lots of Reed Warblers, though, one of the Cuckoo's preferred host birds, so she might well just have been sitting tight, looking for a suitable nest to parasitise. 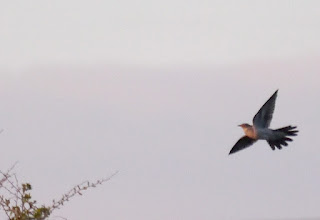 Michelle McGrane's blog Peony Moon offers a constant stream of the best new poetry out there, so it's well worth checking daily. Today, it features Singapore poet Alvin Pang, whose Arc collection When The Barbarians Arrive is out now. You can read four poems from the book here.

I like the look of that a lot - I'll be ordering it later. I've been reading a lot of older, 'back catalogue' poetry recently, so it's time to get back to the here and now.
Posted by Matt Merritt at 08:07 1 comment:

I've not been doing much twitching at all the last couple of years, even within the county, as I've been concentrating on working my local patch, but now that the longer evenings and better weather are here, it's hard to resist the temptation to stop off and do some birding on the way home.

I called in at Cossington Meadows last night to have a look for the Ring Ouzels that have been reported there in recent days. The female showed up just after I got there - it remained frustratingly half-obscured in a little hollow for much of the time, but John Hague managed a decent digiscoped shot, and it occasionally came right out into full view.

The Bullfinches that John mentions were good to see, too, there were a few Lapwings around, and an interesting Wheatear a little further along the track. It looked large, to me, with long wings and a shortish tail, all suggestive of Greenland Wheatear, but I'm not sure if it was highly-coloured enough to be one. The timing's right, too, with most Wheatears of the nominate race having already gone through, but I'll have to put it down as a probable.

Over on Rectory Marsh, this Little Egret was the highlight - strange to think that 25 years ago it would have been causing major twitching activity. 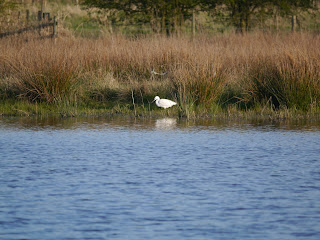 Posted by Matt Merritt at 12:34 No comments: