My latest post at Out There With The Birds concerns the Nuthatch, and Bernard O'Donoghue's poem of the same name. While I was out at the weekend, I saw good numbers of this species around my patch, presumably little family parties just getting ready to disperse for the winter. They were noisy but, as in the blog post, largely indifferent to my presence.
Posted by Matt Merritt at 13:15 No comments:

Labels: Bernard O'Donoghue, Birds, Out There With The Birds, Poetry

There's a really good review of fellow Nine Arches poet Ritchie McCaffery's debut collection Cairn here, in the Irregular Features section of the Dr Fulminare site. While you're there, have a browse through the many excellent past reviews and features, too - it's a truly eclectic site.
Posted by Matt Merritt at 12:11 No comments:

Matthew Stewart, at Rogue Strands, has posted an excellent review of Ben Wilkinson's chapbook For Real, from Smith/Doorstop.

I'm in almost total agreement with Matthew about it. It is, in its own way, a very raw and emotionally honest book, and all the more affecting for that, but that's not to say that Wilkinson's writing isn't considered and absolutely sure-footed throughout.

Anyway, I'll post my own review when I finally get round to finishing it, but in the meantime, do yourself two favours. Read Matthew's review, and buy Ben's book.
Posted by Matt Merritt at 12:11 2 comments:

Posting on here has been fairly sparse of late, mainly due to work and Birdfair. But, one of the best things at Birdfair this year was the launch of the National Bird Vote.

My friend David Lindo, also known as the Urban Birder (you may well have seen him on The One Show and the like), thinks it's high time that Britain had an official National Bird, and I agree whole-heartedly.

So, I cast my first round votes on Sunday, choosing Curlew, Skylark, Kingfisher, Gannet, Lapwing and Puffin (I think - it was a tough choice). Now's the time to make sure that your favourites make it into the second round.
Posted by Matt Merritt at 11:47 No comments:

Apropos of nothing, I've been thinking about anxiety dreams, and how they change over time. Most people, at one time or another, will have had the naked-in-public dream. Having failed to revise for an exam is another common one.

My most regular one, for many years, had a cricketing flavour (I used to play club cricket regularly). I'd get the call to go in to bat at the fall of a wicket, and find I had no pads on. I'd rush to get padded up, manage to do so in time, then find that the spikes in my boots were stuck fast in the wooden floor.

These days, I occasionally get a poetry anxiety dream instead. I'm doing a reading, usually somewhere pretty upmarket-looking, when I realise that I've got no books or manuscript or anything. At that point, it occurs to me that I've never actually written a poem, and I'm caught between asking the organisers why on earth they booked me, and legging it at high speed.

But anyway, my question is, does anyone out there get anxiety dreams that are nothing to do with any aspect of their real lives?
Posted by Matt Merritt at 13:17 4 comments:

Issue 13 of Under The Radar is out now, from Nine Arches Press - you can order it, or set up a subscription, here.

It's the first one for which I've acted as poetry editor, so I'll be interested to hear any feedback about how you think we've done in terms of striking a balance of content.
Posted by Matt Merritt at 13:15 No comments: 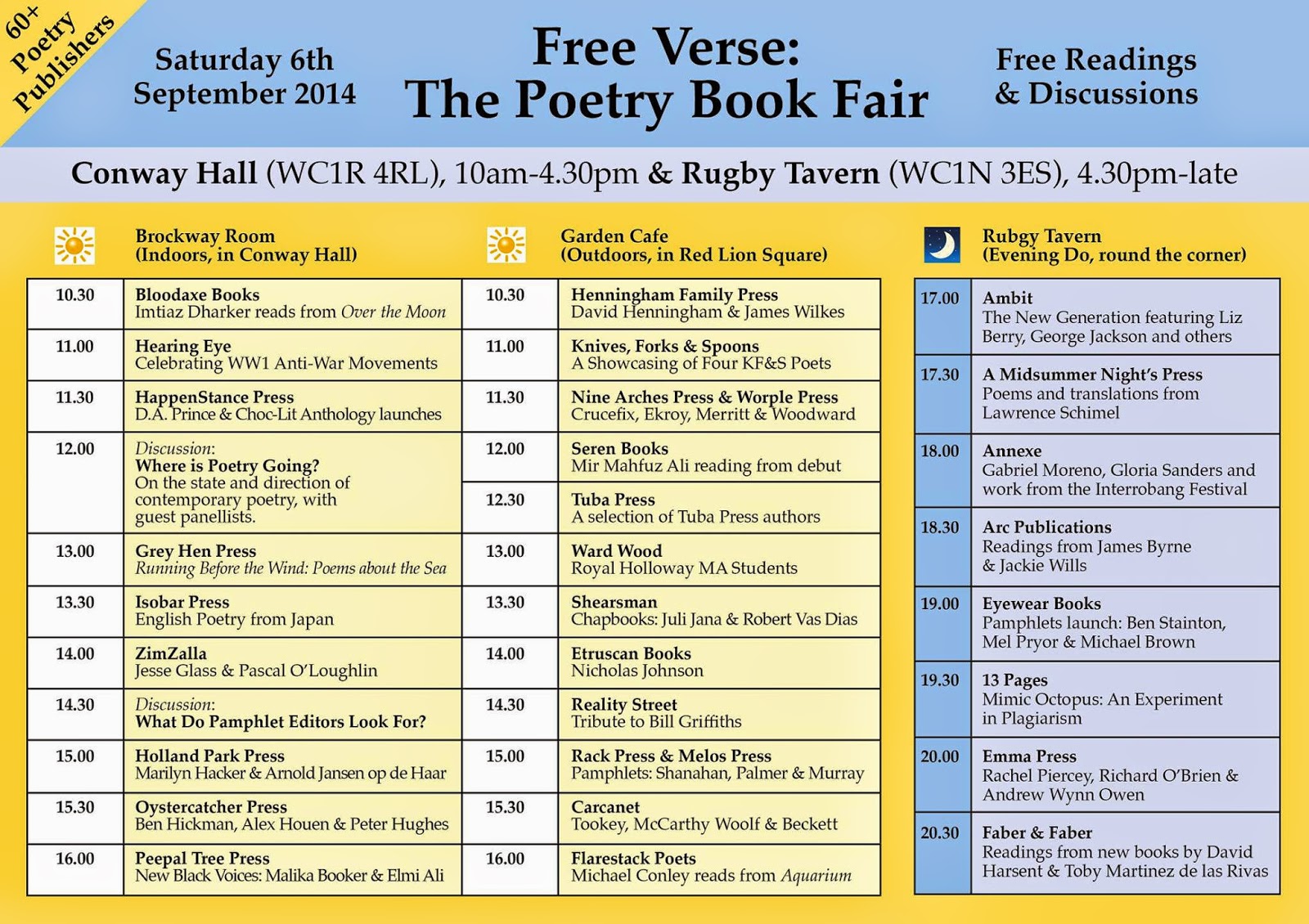 An early heads-up for this - I'm reading with fellow Nine Arches Poet Josh McEkroy at the Garden Cafe at 11.30, but I'll be hanging around all day, either at the Nine Arches stand or somewhere close by. There's loads of good stuff going on, and if anyone fancies catching up, drop me a line.
Posted by Matt Merritt at 12:25 No comments: