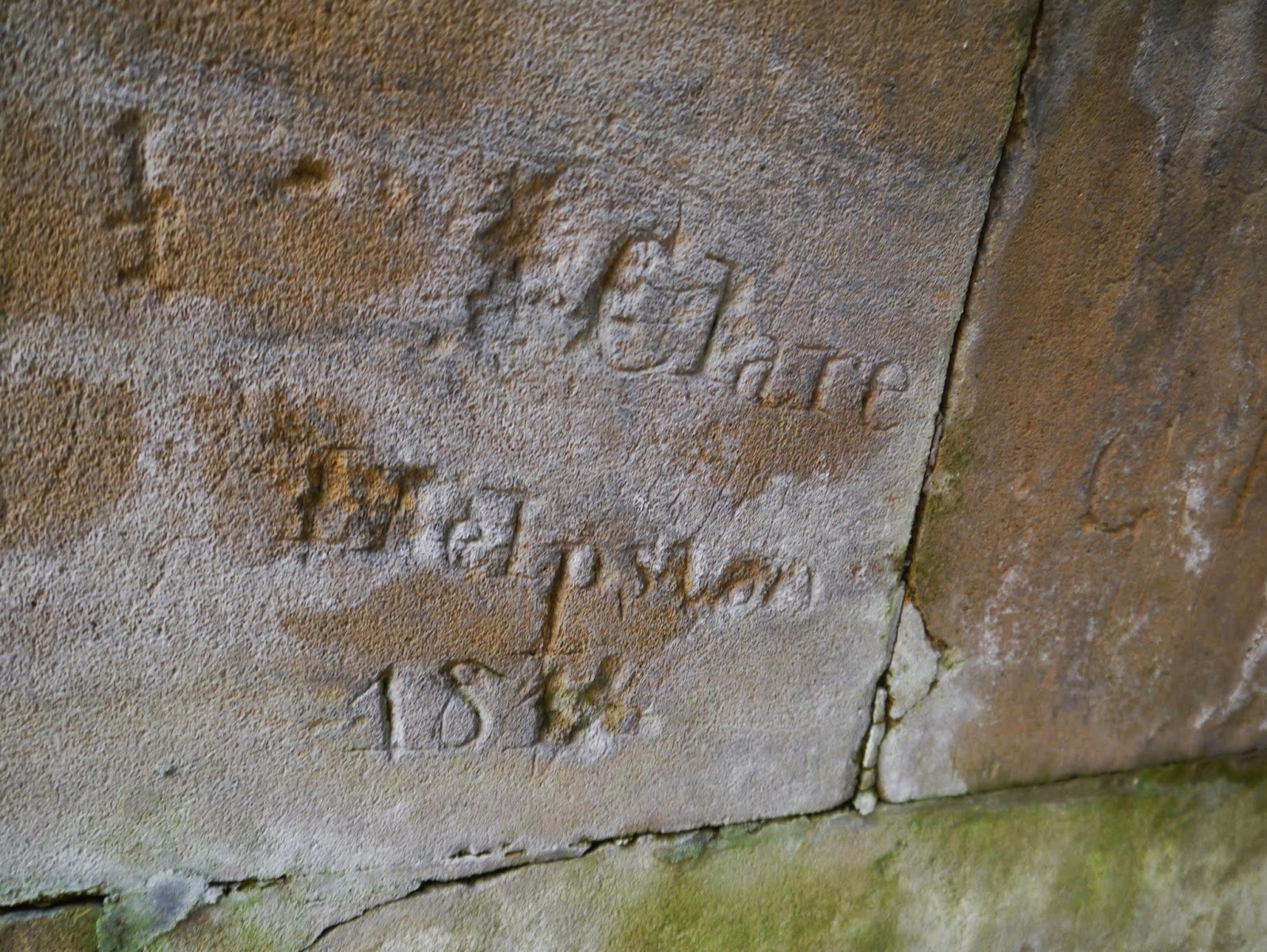 I was over around Helpston yesterday, as part of an ongoing project with photographer Phil Harris. We're not trying to trace John Clare's footsteps or anything like that, just to use some of the locations associated with him to spark off ideas.

For most of the time, for example, we've become a bit fixated on roads and green lanes, but yesterday we thought we'd have a look for a piece of graffiti left by Clare on Lolham Brigs, just north of his home village of Helpston. I'd heard about it a few years ago, but had always thought it might be quite tricky to find, as the bridges are pretty extensive and in a fairly marshy area.

As it turned out, we found the inscription straight away. My photo isn't very good (Phil took some much larger scale pics of it all), but it seems to read "John Clare, Helpston, 1817". The date might not be right, but it's there with a lot of other graffiti dating from 1790 onwards, and in particular concentrated in the years up to 1830 or so.

As you'll see from this poem, Clare featured the site in his poetry more than once. 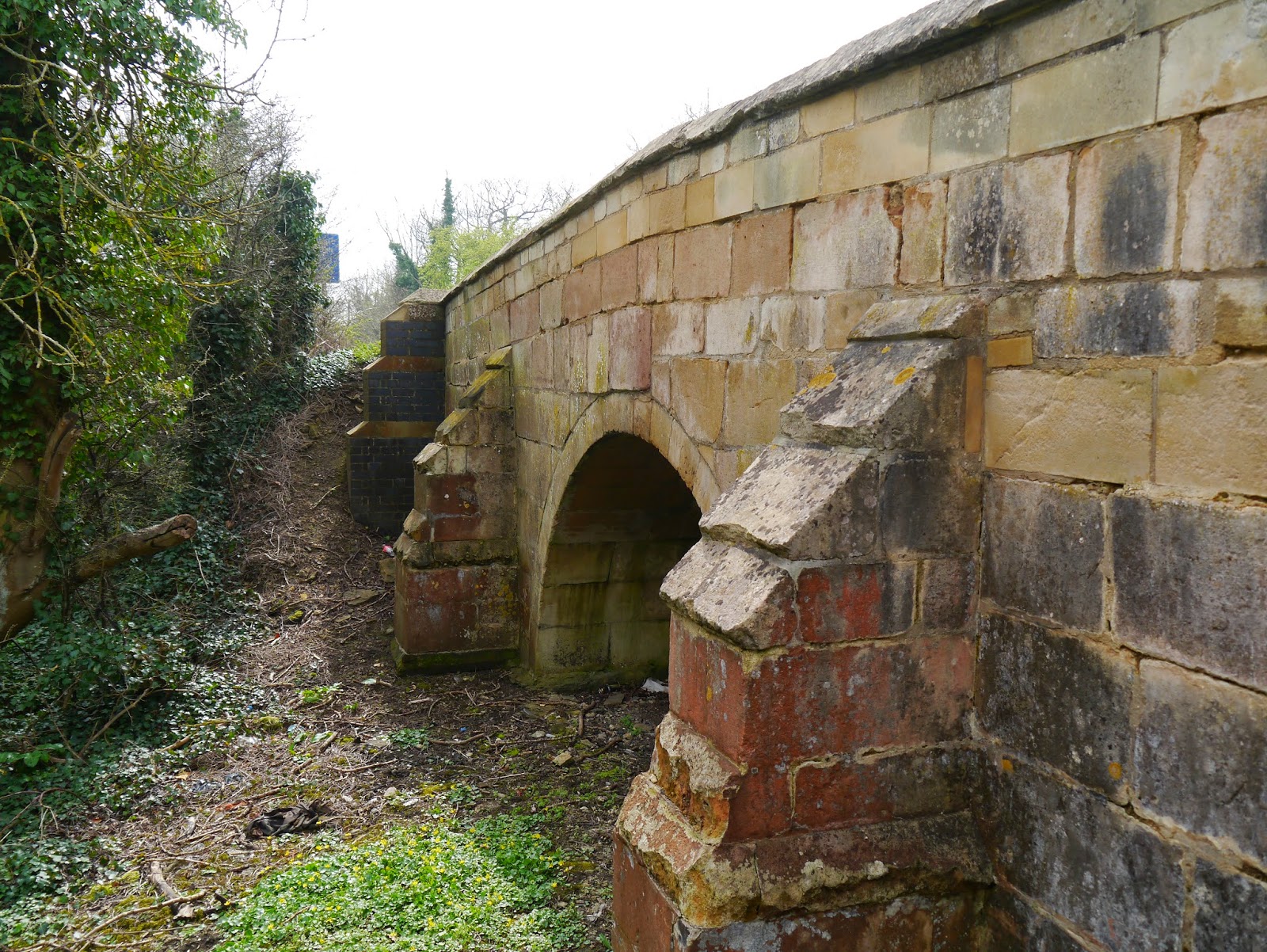 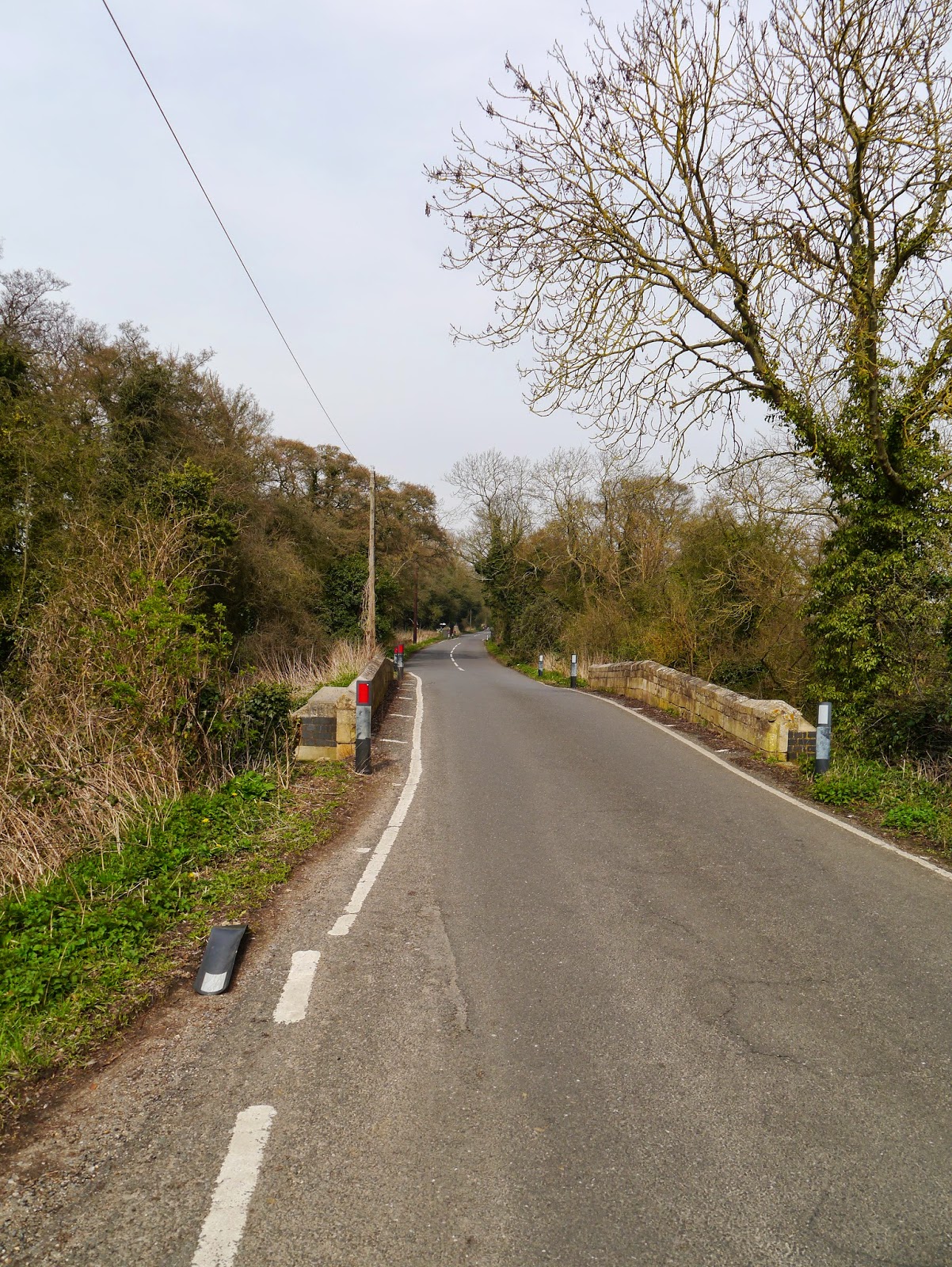 Posted by Matt Merritt at 13:18 No comments:

Another first in Argentina 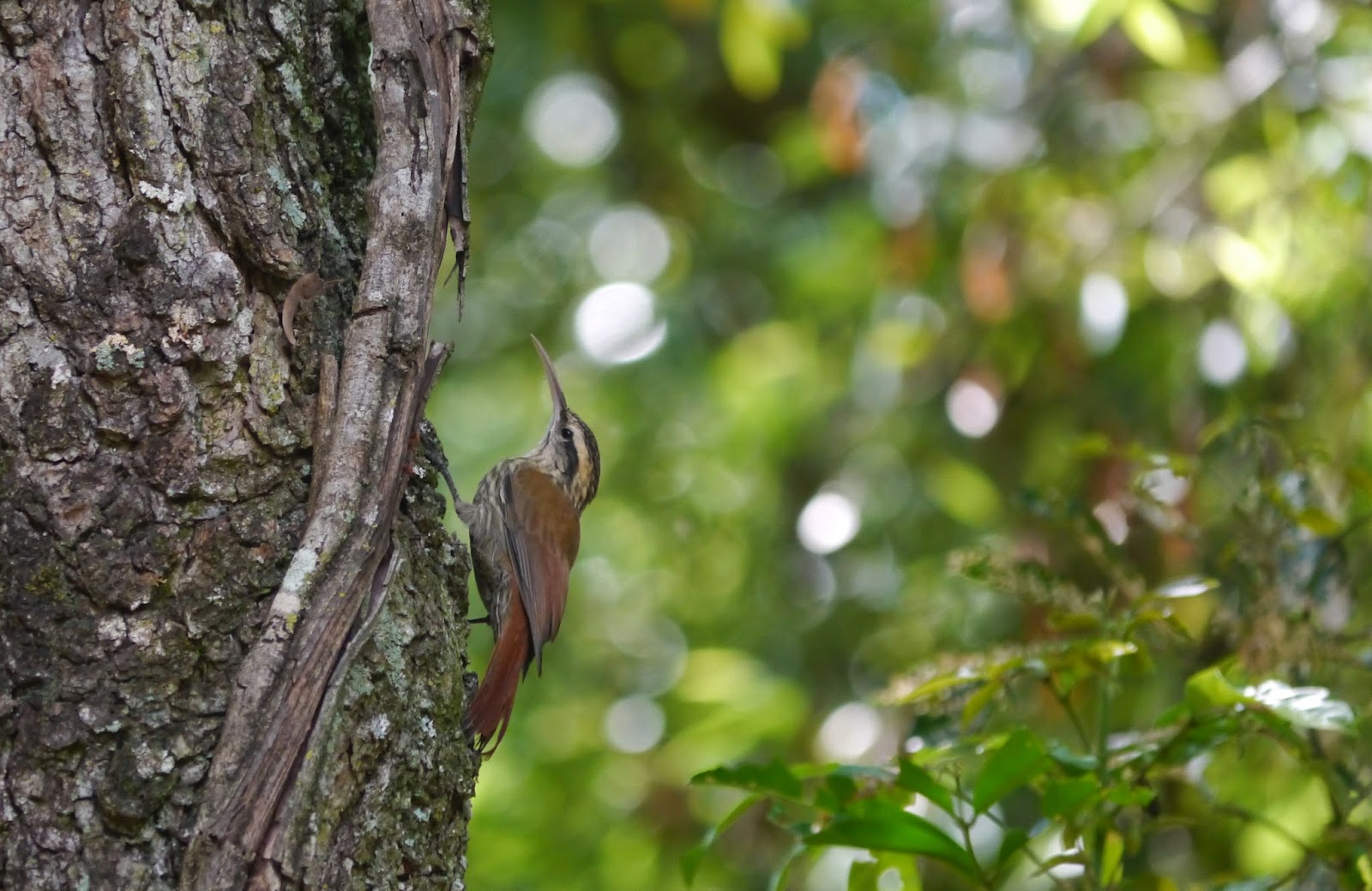 We saw this Narrow-billed Woodcreeper in the Mburucuya National Park, northern Argentina. It's a family of birds I'd never come across before - they're not unlike our own Treecreeper, but rather larger.
Posted by Matt Merritt at 13:39 No comments: 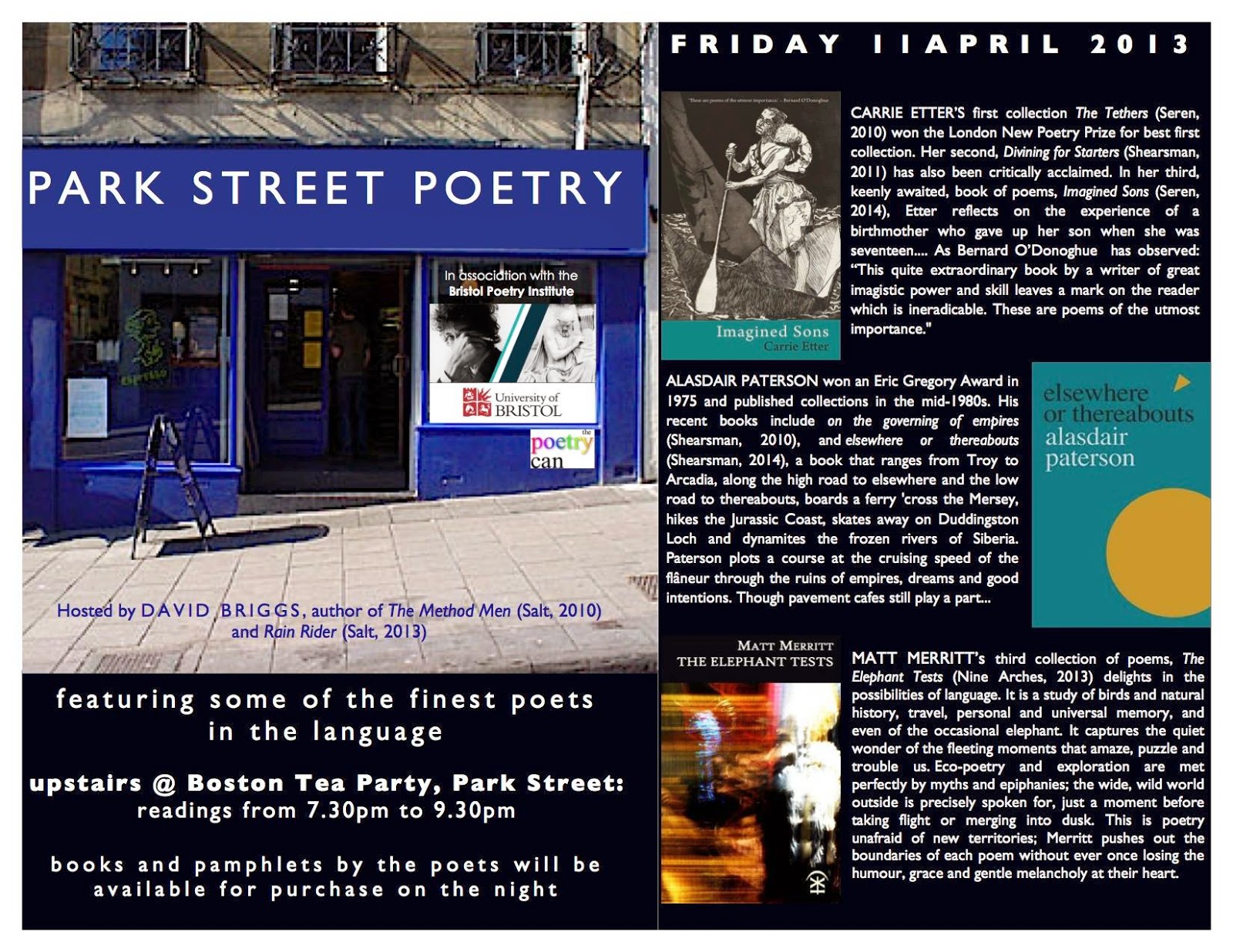 Delighted to be reading alongside Carrie Etter and Alasdair Paterson on April 11th - more on this soon...
Posted by Matt Merritt at 08:34 2 comments:

Over at the Irregular Features section of the Sidekick Books website, Ned Carter Miles has reviewed The Elephant Tests at length.

It's a very thoughtful and well-argued assessment, for which I'm extremely grateful, and it has me thinking about the direction I've taken in the small amount of poetry I've written since the book came out.

While you're over at the Sidekick site, take the time to browse it more thoroughly, in particular the rest of the Irregular Features, which are a real little treasure trove of criticism and reviewing.

And finally, a reminder that you can buy The Elephant Tests here.
Posted by Matt Merritt at 13:26 No comments: 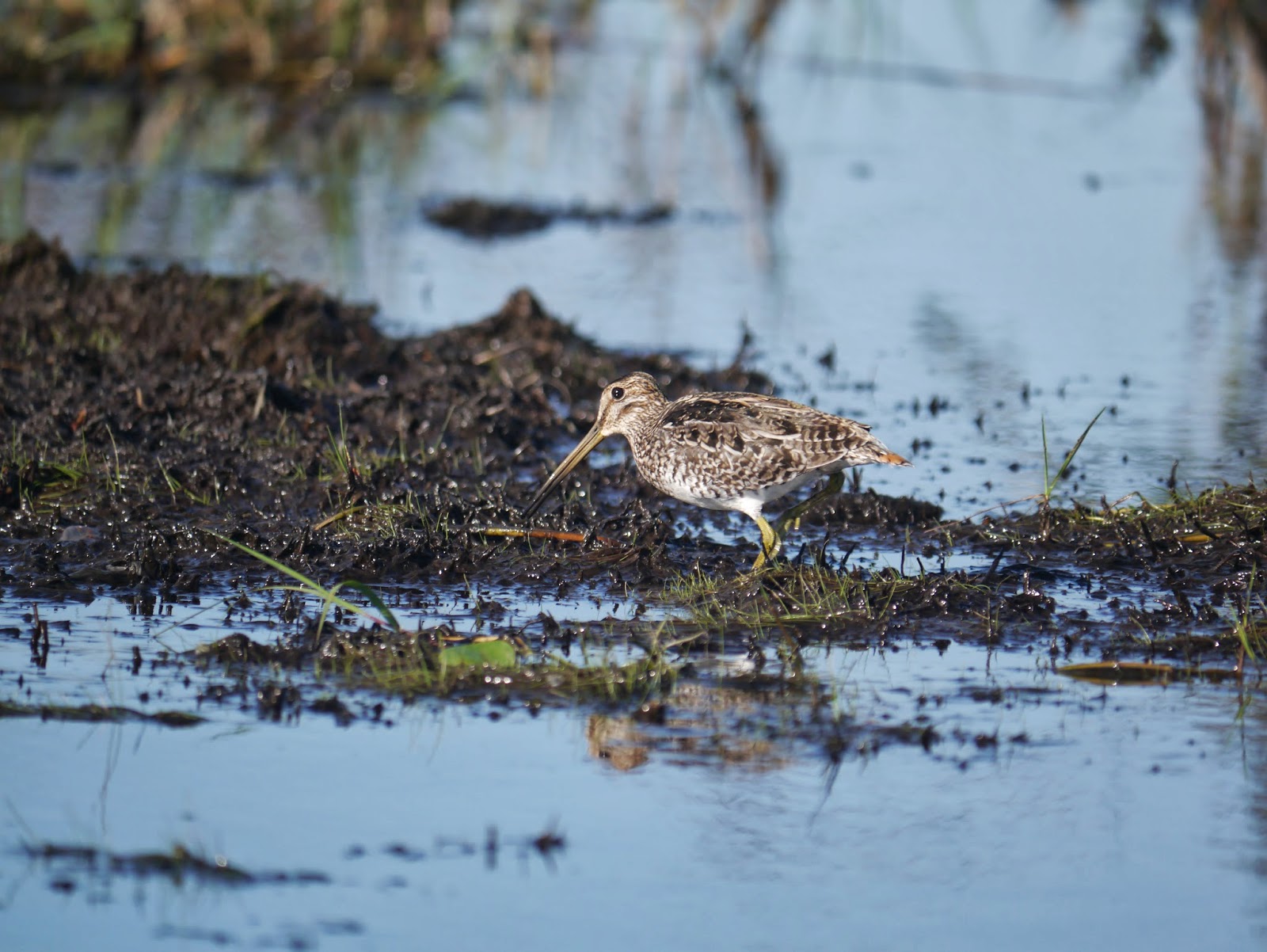 If I had to pick a favourite bird family, I'd probably be stuck between corvids and waders (shorebirds to Americans). I think my liking for the latter has something to do with growing up in a relatively wader-starved part of the country.

Anyway, both were in short supply in Argentina. As I've already noted, Chimago Caracaras seem to fill the niche taken here by Carrion Crows, Magpies and Jackdaws, while we were probably around at the wrong time of year to get many waders.

Having said that, the Southern Lapwing, below, was pretty much everywhere we went, and like all lapwings it's a striking creature. 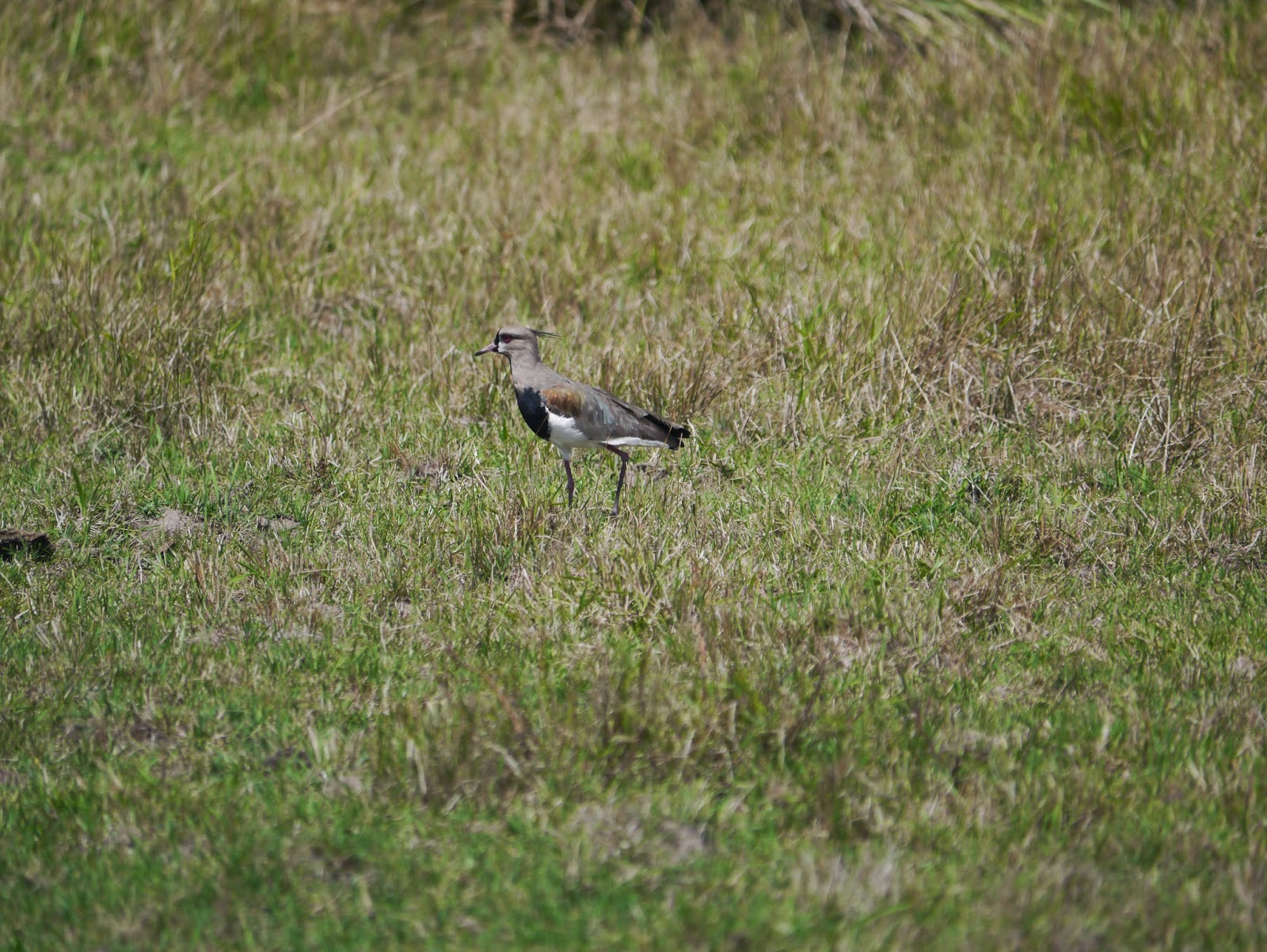 At the top of this post is a South American Snipe, sometimes treated as a race of Common Snipe. There are certain differences in behaviour and call, from what I saw, but it's an interesting question.

Finally, below, there's a Solitary Sandpiper, a new bird for me. It has a certain Wood Sandpiper feel to it. Other wader ticks included South American Stilt, Two-banded Plover, and both Greater and Lesser Yellowlegs (and trying saying the latter in a hurry). 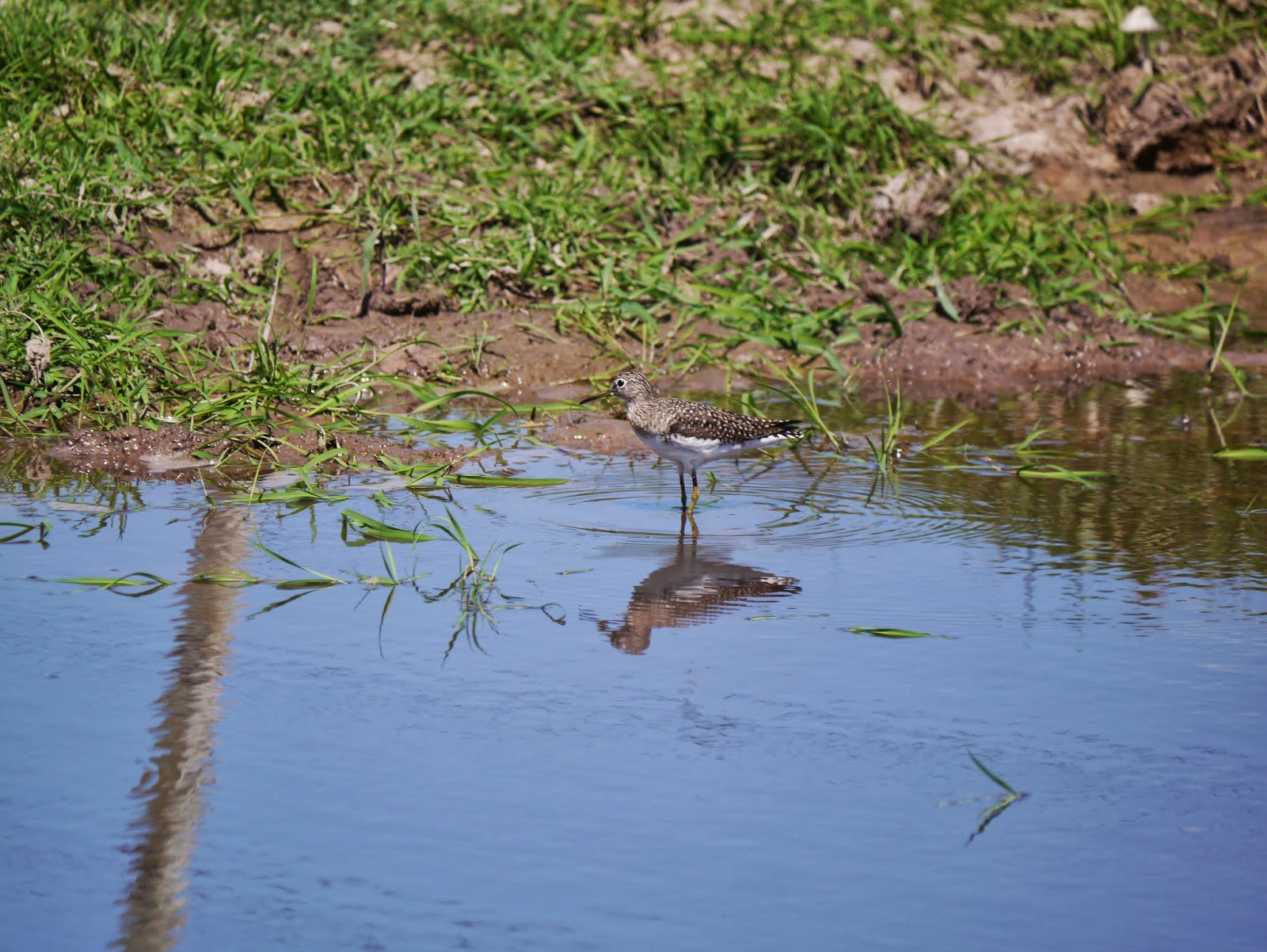 Posted by Matt Merritt at 16:39 No comments:

I've just returned from a couple of weeks birding in Argentina - I was part of a press trip led by Tim Appleton, the founder of Birdfair and manager of the Rutland Water reserve. My other fellow travellers (and you'll hear more about them all later) were Bill Thompson III, editor of Bird Watcher's Digest in the USA, Dominic Couzens, one of the UK's best nature writers, and Niklas Aronsson, editor of Var Fagelvarld, the magazine of BirdLife Sweden.

After a day in Buenos Aires, we headed north into the Ibera wetlands, a region that's relatively unknown to European birders, but which has the look and many of the same birds as Brazil's famed Panatanal. From there we flew south, into the Andean foothills of Patagonia, and spent several days in the 'Lake District' around Bariloche and San Martin de los Andes.

I've already posted a fair few pictures on Facebook and Twitter, so apologies if there are some repeats here over the next few weeks. And before I get started, I'd just like to thank Pablo Cagnoni, everyone else at Inprotur Argentina, and our many excellent guides and hosts. You'll be hearing a lot more about them too. 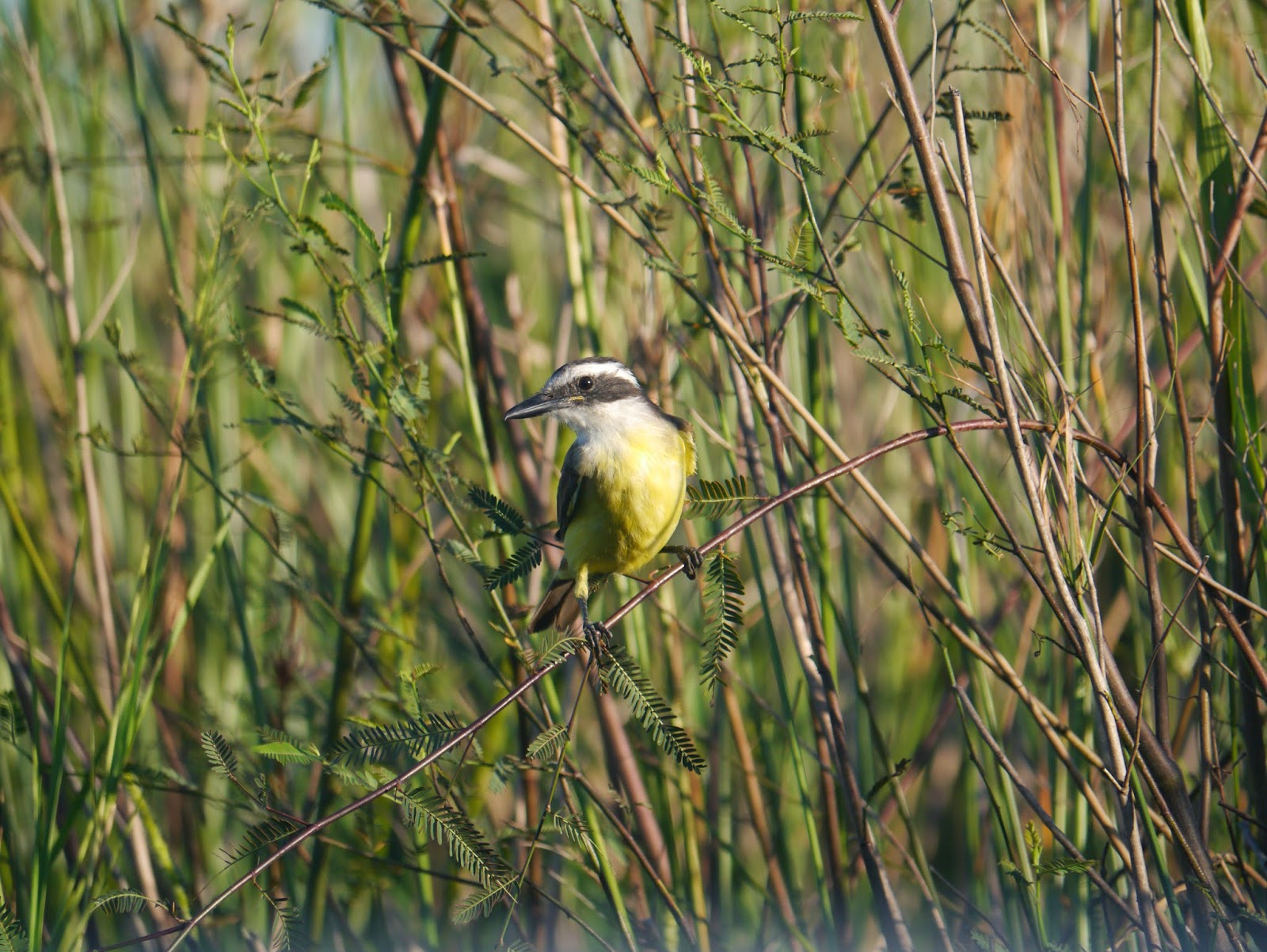 Over the two weeks, we saw some truly astounding birds and wildlife spectacles, but I thought I'd start with a couple of what birders rather disparagingly (and disappointingly) call 'trash birds' - that is, very common and widespread species. Whenever I've bird-watched abroad, I've found it fascinating to discover just which species are the equivalent of the Blackbird or Great Tit that we see on a daily basis over here.

Above is a Great Kiskadee (Benteveo Comun, in Spanish), a large tyrant flycatcher that we saw everywhere in Ibera, as well as at the excellent Costanera Sur reserve in Buenos Aires. Its name is an imitation of its call, and it flycatches enthusiastically, hovering and swooping like a mini-raptor (it does occasionally catch small mammals and even fish). 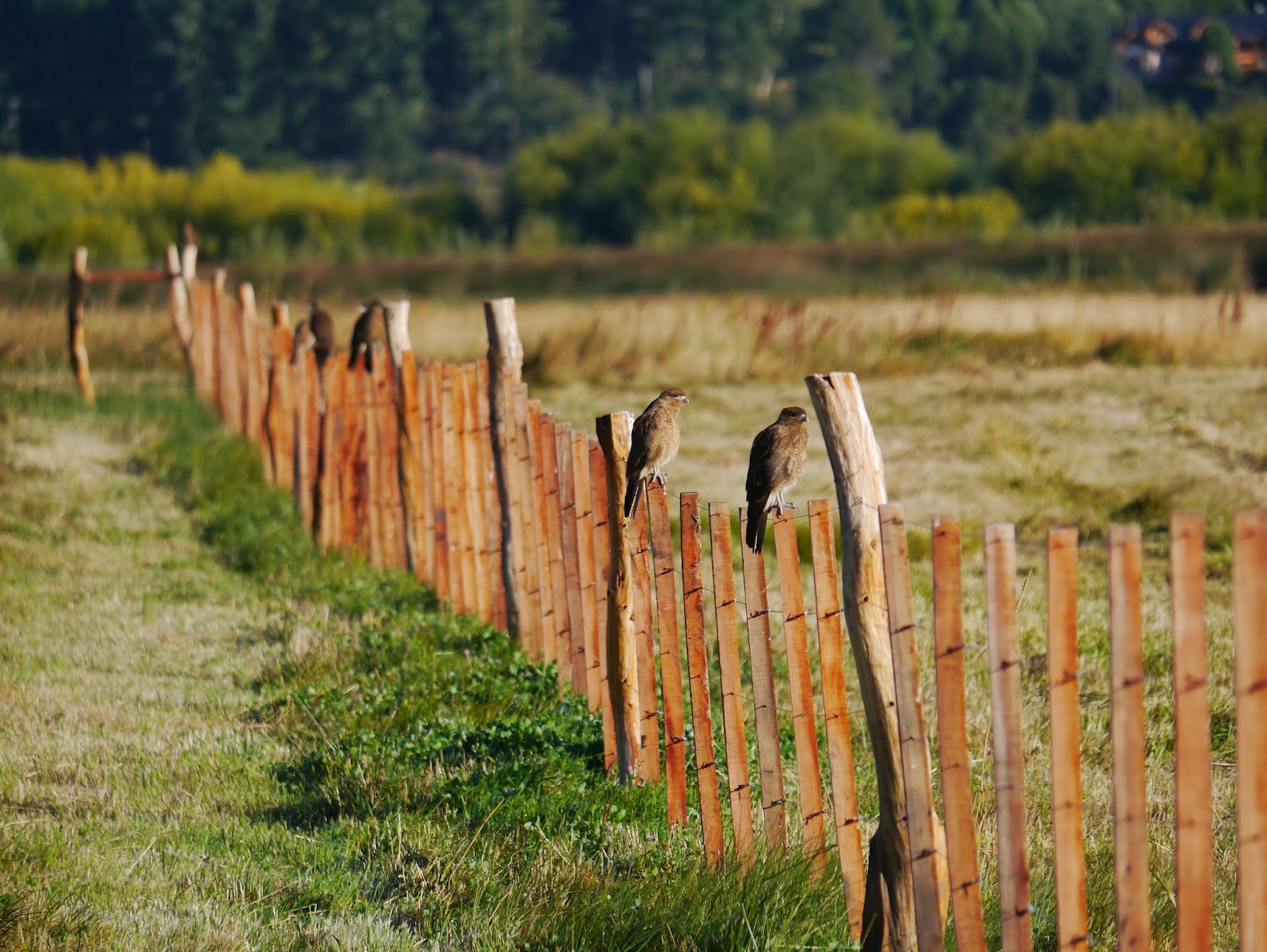 Chimango Caracaras, above, were pretty much everywhere we went, and seemed to fill the niche taken up by Carrion Crows, Magpies and Jackdaws over here (the only corvids we saw were a couple of jays). That's to say, they feed opportunistically, and with a great willingness to adapt to whatever circumstances throw into their path. Despite their rather vulture-like behaviour, caracaras are related to falcons, and are found throughout South and Central America. I love corvids, and I love raptors, so a raptor that behaves like a corvid is always going to be a winner in my book.
Posted by Matt Merritt at 13:50 3 comments: