Three reasons to be depressed by cricket...

...other than cheating Australians and the misery of England's winter tours, I mean.

1 TalkSport getting the rights to broadcast England's tours next winter. I don't care who they recruit, it's not going to be Test Match Special, is it? And although TMS these days isn't always as good as it could be, it's still pretty great.

2 The creation of another new format for the ECB's city-franchise league. Why? They say it's partly to differentiate it from their 20/20 Blast competition, in which case why not just do one or the other? Preferably the former, as many cricket fans, me included, will have zero interest in supporting artificially created teams that ignore large parts of the country. Reading around the decision, it seems the ECB don't really give a damn what cricket fans think, though. They want to attract new audiences. Which is fine, but pretty pointless if you drive away your core audience in doing so. Also, why the obsession with speed? They've shaved time off the game anyway, but will then penalise teams for slow over rates, with the result, of course, that potentially close finishes (which is what people want to see in limited over and 20/20 cricket) will be ruined by late adjustments to the target. If I'm giving up an evening to watch a game of cricket, half an hour here or there makes no difference, but I do want to see the game decided by skill.

3 The appointment of Ed Smith as national selector. How predictable that it should be an Oxbridge educated former Middlesex player. There's a lot of talk that he'll take a stats-based, 'Moneyball' approach, which is fine up to a point, but I suspect will mean a return to the chopping and changing of the 80s and 90s. It's no coincidence that England's best years, during my lifetime, were with David Graveney and Geoff Miller as selectors – both of them emphasised continuity, consistency, and settled teams.
Posted by Matt Merritt at 11:20 No comments:

I've probably written on here before about the fact that April 20th is, in my mind, Redstart Day. For years, on my old patch, I would see Redstarts migrating through the area, usually in a hedge at Thornton Reservoir, but occasionally at somewhere like Groby Pool.

The date already had great significance, because it was the birthday of my older sister Rebecca, who died of cancer in 2004, aged 35. And somewhere along the line, the two things became linked in my mind, and going out and seeing a Redstart became a little ritual of remembrance.

Of course, there's a self-fulfilling prophecy element to it. Migrating Redstarts favour particular habitat, so you have to go out looking for them specifically, and most years, I've probably not visited likely sites until the 20th has rolled around and jogged my memory. Still, it's a habit I can't kick.

So, when my colleague Mike Weedon found one at Ferry Meadows Country Park, just along the road from the office, this morning, I had to go to take a look. And there it was, a gloriously sharply-marked male, flitting up and down a hedgerow, and occasionally dropping down to the ground to eat a tasty morsel. A couple of Whitethroats were frequenting the same hedge, and a bit further along, a Lesser Whitethroat showed up, too. Evidence that, after the long winter and cold spring, migration is in full flow.

I wrote about this, and the miracle of migration more generally, in my book A Sky Full Of Birds, which is available online, at most bookshops, or direct from me (if you want a signed copy).

But I also talked about them for BBC Radio 4's Tweet of the Day, recently – you can listen to it here.
Posted by Matt Merritt at 12:06 No comments:

Labels: A Sky Full Of Birds, BBC Radio 4, Birds, Tweet of the Day 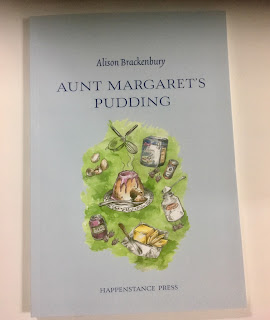 This arrived yesterday – Alison Brackenbury's new collection for HappenStance Press. Looking forward to getting stuck into it like I would any good dessert!
Posted by Matt Merritt at 09:00 No comments:

Here's a straightforward question. What do you understand by the word 'shibboleth'?

I ask because, in the reporting of the Barry Gardiner story, two different versions have been given as the standard, contemporary definition, and one of them surprises me. Not that it makes a huge amount of difference to the story, I'm just interested.
Posted by Matt Merritt at 11:37 2 comments: 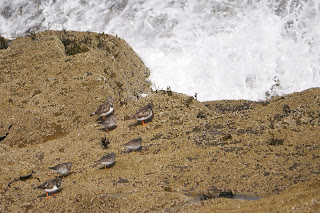 Finally, another pic from Hopeman harbour, on the Moray Firth. These Turnstones and Purple Sandpipers returned to these rocks to feed the second the tide turned, having roosted on the harbour walls while it was at its highest point. Purple Sands are always a pleasure to see, because as probably the most maritime of all our waders, they very rarely turn up anywhere even slightly inland.

There's a lot more about waders, birding in Scotland, and all of Britain's best birdwatching spectacles, in A Sky Full Of Birds. It's now a couple of years since it came out, but you can buy it using that link.

If you'd prefer a signed copy, drop me a line through the email link on the right, or through the comments, and I can sort one out. Paperbacks only, at the moment, sorry.
Posted by Matt Merritt at 11:33 No comments: 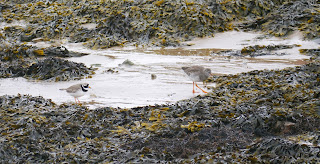 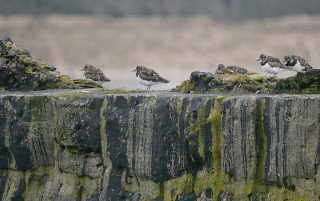 More waders – this time the Ringed Plover and a Redshank together, and Turnstones on the harbour wall. The latter were all at various stages of moulting into their summer plumages.
Posted by Matt Merritt at 11:31 No comments: 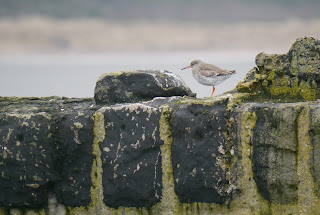 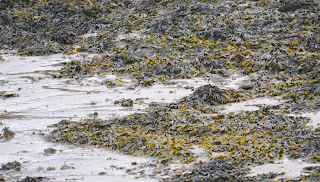 A couple more shots from last week – a Redshank on the harbour wall at Hopeman, and a Ringed Plover testing out its camouflage there.
Posted by Matt Merritt at 11:29 No comments: 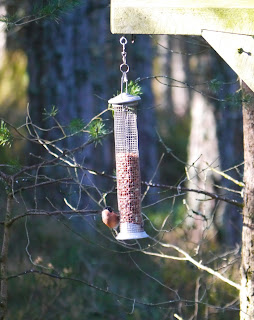 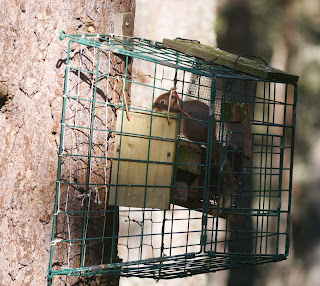 I was up on Speyside for a couple of days last week, with a Bird Watching Magazine/Heatherlea Birding readers' holiday. We saw around 90 species of bird in just two days, including White-tailed Eagle, Goshawk, Velvet Scoter, Black Grouse, Iceland Gull and Purple Sandpiper. But I'm not a good enough photographer to have snapped most of them, so here's a lovely male Bullfinch on the feeders, and a Red Squirrel doing its best to hide.
Posted by Matt Merritt at 11:29 1 comment: