A Sky Full of Birds 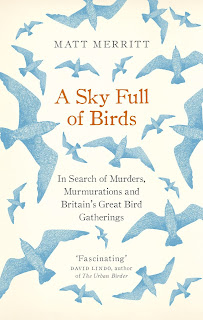 This is what I've spent a large part of my writing time on for the last two years – a 'birding memoir', in which I talk about trying to see Britain's greatest avian spectacles, and how they're almost without exception within easy reach of everyone with even the most casual interest in wildlife. There's also a lot of rambling about history, poetry, and football.

It will be published by Rider Books at the beginning of April, and I apologise in advance for the fact that you're going to hear a lot about it on here over the next couple of years. If birds aren't your thing, move along quietly and there'll be some poetry to follow.
Posted by Matt Merritt at 10:56 1 comment:

Very interesting blog piece from Charles Boyle here, on the current debate about literary festivals paying (and not paying) writers. It is, of course, a very complicated subject. I'd guess many writers find it difficult to say no to unpaid readings and appearances even if they do feel strongly that they should be paid, but equally I'm not sure if any of the festivals are making a great deal of money out of the whole thing. One to discuss at length.

There's another interesting take on the issue here.
Posted by Matt Merritt at 12:11 1 comment: 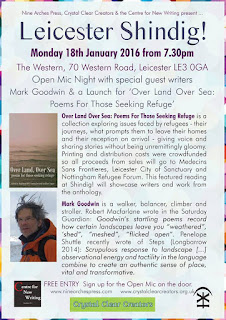 I've been very poor at updating things around here just lately, but for now it's worth highlighting this event, on Monday night - as always, it's worth making the effort to get along to. Open mic slots will be available, and Mark Goodwin always reads well. It all starts at 7.30pm, and entry is free.
Posted by Matt Merritt at 12:48 No comments:

Birmingham-based Haunted House Theatre will be touring the Midlands with a new verse play about free schools.
Free for All, written in iambic pentameter, is a play by University of Birmingham PhD student Richard O'Brien, a prize-winning poet who is researching if poetry can still work in the theatre for modern audiences.
Following a successful run at the Edinburgh Fringe, the show tours to Nottingham Contemporary (Jan 27th), Hansom Hall, Leicester (Jan 28th) and mac Birmingham (Jan 29th). Actors have been cast from the finest of the region's professionally-trained talent.
Richard said: “I'm especially excited to come to Leicester, the birthplace of Joe Orton and resting place of Richard III, with a show mixing Shakespearean and modern theatrical traditions. With King Charles III playing at the Curve, Leicester is getting two modern verse plays in one week!”
“For a long time, it would be unusual to go to the theatre and not hear poetry. Even today, Shakespeare is the world's most performed playwright, but I think poetry in the theatre is something we've become very suspicious of. Free for All is an attempt to show that verse on stage can still speak to people now.”
Director Rebecca Martin expects the play to ruffle a few feathers: “Free schools are one of the most controversial topics of the day. Since the General Election, all parties and voters have been asking tough questions about privilege. How can education give every child an equal chance? Free for All doesn't offer one answer, but Richard's characters have very strong opinions on both sides.”
Martin was a co-founder of pantsguys productions, an Australian company which won multiple Sydney Theatre Awards. She said her first UK company was created with one thing in mind: “We set up Haunted House Theatre to revive a kind of theatre where the power of language can make anything happen.”
Richard O’Brien was a winner of the Foyle Young Poets of the Year Award in 2006 and 2007, and the 2015 London Book Fair Poetry Prize. Andrew McMillan describes him as ‘one of the strongest poets of his generation’. He is working on a practice-led PhD on Shakespeare and the development of verse drama, funded by the Midlands3Cities Doctoral Training Partnership, and lives in Birmingham's Jewellery Quarter.
The show is coming to Nottingham Contemporary on Jan 27th (free – book here), Leicester's Hansom Hall on Jan 28th (tickets here), and Birmingham mac on Jan 29th (tickets here). Alongside the production, Haunted House will offer talkback sessions and workshops on this little-known field for actors, writers and directors. Further discussion of the ideas behind the production can be found here.
For more information see https://hauntedhousetheatre.wordpress.com, go to https://www.facebook.com/hauntedhousetheatre, and follow @hauntedhousetc / @notrockyhorror
Posted by Matt Merritt at 12:09 3 comments: