I was away at the Hula Valley Birdwatching Festival in northern Israel last week. It was really excellent, but my one regret about going was that I missed the HappenStance reading in Nottingham at the weekend. As Matthew Stewart and Maria Taylor have written, it was clearly an event to remember. Next time, I hope...
Posted by Matt Merritt at 19:44 No comments:

Poetry at the Flying Goose

The Flying Goose Cafe in Beeston High Road, Nottingham, hosts a reading on Tuesday, December 13th, from 7.30pm, with the featured readers Emily Hasler, Shaun Belcher, JT Welsch and Adrian Slatcher. It's an open reading, though, so if you want to take a poem along to read, feel free.

It's staged by the Nottingham Poetry Series and Nottingham Trent University. Entry is free, but donations of £3 are welcome.

I'm not sure if I'll be able to get along that night, but past events have been excellent, and the cafe sells some splendid cakes, so it's definitely one for the diary.

Posted by Matt Merritt at 13:16 No comments: 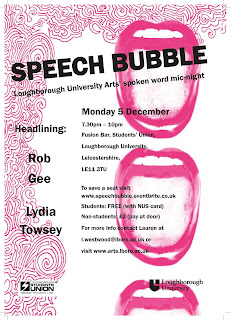 Interesting open mic night in Loughborough next Monday - there's a growing number of places to read at in the East Midlands all of a sudden. I'm supposed to be at a meeting that evening, but some diary-juggling may be possible.

Posted by Matt Merritt at 13:22 No comments:

I was only able to pop into the festival on Saturday afternoon, but I had enough time to see readings by Christopher James, Kathleen Jones, Clive Allen, Susanne Ehrhardt and Jo Bell, as well as to buy a couple more of Templar's beautifully produced books (Clive's collection Violets, and the 2011 anthology, Bliss), and chat with Wayne Burrows and Roy Marshall.

I'm pushed for time, so I won't attempt any genuine review of the readings (they were excellent, though). But here's three thoughts that occurred to me...

1 Introducing one of his poems, To Read The Relationship between the Residents and the Surfers in Newquay, Clive mentioned that he had never surfed, or been to Newquay, but that he saw no reason why that should stand in the way of him writing the poem. Increasingly, that's how I feel. Not that there's anything wrong with facts finding their way into a poem sometimes, but it probably gets a bit overdone, and we probably all know the feeling you get where you try to cram all that research into the poem. Far better to wing it now and then, I think.

2 St Guthlac seems to find his way into contemporary English poetry more than any of his fellow saints, and should be declared the patron saint of English poetry forthwith. He cropped up in one of Christopher James' poems (a really fine one about fen-skaters), I've seen him mentioned in another within the last few weeks, he cropped up in Tom Chivers' How To Build A City, and he was in one of my poems in Troy Town (which, alarmingly, I've completely forgotten the title of, and I haven't got it to hand to check). Guthlac spent a large part of his life as a hermit on the fen island of Crowland, driven half-mad by the isolation, hunger, the ague, the effects of eating hallucinogenic plants, and regular visits from a whole tribe of demons. You can decide for yourself whether that makes him more or less suitable for the post.

3  Clive Allen also, in the introduction to another poem, described poetry as "a complicated way of being ignored". That might be my current favourite definition of poetry.

A Night of HappenStance

Six HappenStance poets from as far away as Spain will be gathering for a reading downstairs at Lee Rosy’s in Nottingham (17, Broad Street, NG1 3AJ – opposite the Broadway cinema) on 26th November, from 7.30pm. Entrance is £4, or £3 for concessions.

Helena Nelson (editor of HappenStance Press), Ross Kightly, Marilyn Ricci, Robin Vaughan-Williams, DA Prince, and Matthew Stewart (who will be in the country to launch his new pamphlet, Inventing Truth) are the readers.

That's six really fine poets, and I only wish I could be there to hear them – I'll be away because of work.

Helena will also be adjudicating the Nottingham Open Poetry Competition at 2.45pm at the Mechanics Institute (at 3 North Sherwood Street, Nottingham, NG1 4AX).

Posted by Matt Merritt at 17:47 No comments:

Ian Parks and Alan Jenkins are reading as part of the Literary Leicester Festival this Thursday at 6pm, in the Ogden Lewis Seminar Suite in the University of Leicester's Fielding Johnson Building. Entry is free, but you need to book tickets - details are here.


Straight afterwards (well, at 7.30), you can get along to the Peter Williams Lecture Theatre in the Fielding Johnson Building for Grace Nichols' and John Agard's joint performance show Sunris and Man To Pan, which look at two iconic Caribbean metaphors of transfiguration – Carnival and Steel Pan. Further details are here.