I came across this page yesterday, and was surprised to find that Michael Drayton is credited with the first use of the name 'Goosander' (although he says "Gossander'), for the sawbill duck Mergus merganser.

It's not the only bird name that he coined, or at least first recorded, either. Bidcock (possibly meaning Water Rail) and Tydie (possibly referring to a Blue Tit) are also listed here, but Drayton's masterwork also contains a lot more references to archaic or folk bird names.
Posted by Matt Merritt at 08:53 No comments:

My latest post is now up at Out There With The Birds - it features a rather wonderful poem by Frances Corkey Thompson, from her HappenStance pamphlet The Long Acre, as well as some very nice Stonechat photos by my good friend Peter Jones.
Posted by Matt Merritt at 08:13 No comments:

Labels: Birds, Frances Corkey Thompson, Out There With The Birds, Poetry

Tree of the Year

The Woodland Trust is asking the public to vote for England's first Tree of the Year - here's the top 10 to make your selection from.

I will, of course, be opting for the Major Oak, given its supposed Robin Hood connection.

While looking at the background of this, I noticed that what's thought to be England's oldest oak tree is just down the road from the office, here, near Bourne.
Posted by Matt Merritt at 13:49 No comments:

It happens every year. The shortlist for the TS Eliot Prize appears, and I've read far too few of them to be able to offer even a vaguely informed opinion. There are a couple of names on there who would, I suspect, be shortlisted were they to enter their shopping list, but that's not to say they're not fine poets. Anyway, on the whole, this shortlist makes me curious to read more, so that's no bad thing.
Posted by Matt Merritt at 15:08 No comments: 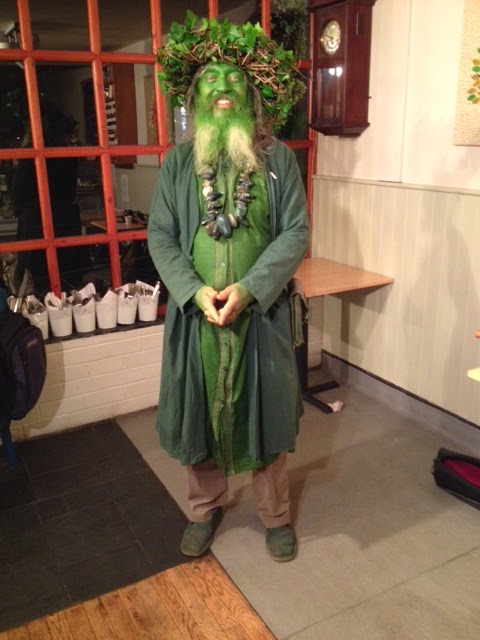 Occasionally you come across a poetry event that's a bit out of the ordinary. Last night, I'm proud to say, I was part of one.

Green Man Poetry, at Kendalls of Earlsdon, Coventry, was the perfect venue for an evening of poetry, song and performance, with the Green Man himself, Barry Patterson, leading the way. He bookended the evening with impassioned performances of songs, drumming, flute and bagpipe music, and a mixture of his own poetry and William Blake's. What's invigorating and inspiring about his performance is that his vision of what could be - man learning to live in greater harmony with the natural world - comes through at least as strongly as his indictment of what's wrong. If you get a chance to see Barry perform as the Green Man, don't miss it. 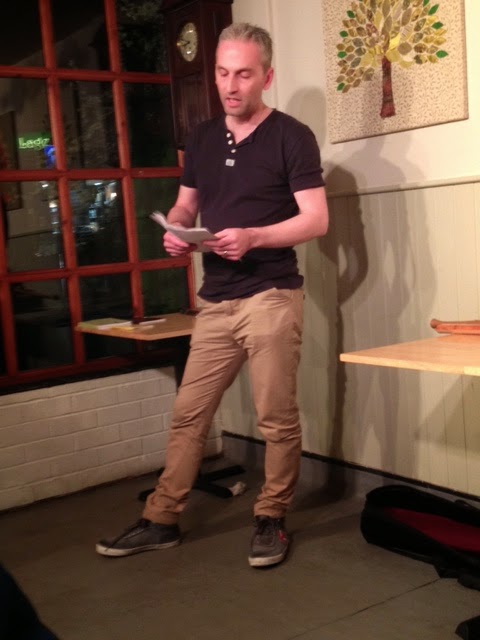 Antony R Owen (above) was the first of the guest readers. Another writer whose work is deeply rooted in his immediate environment, he manages to be both understated and powerful - no mean feat - and he has the knack, like most of the best readers, of creating a crackle of tension in the room (packed out, by the way, and a very fine venue it was too).

Tom Wyre's poem on the horrors of the fur trade was a highlight of his excellent set - poetry that made you uncomfortable, and asked questions without posing easy answers or reaching for consolation.

Leanne Bridgewater isn't a poet I'd heard before, but I hope I'll hear and see her again. Her performance (and it was a performance, complete with items of fruit handed out to audience members), was never less than intriguing, and hugely entertaining.

I read five poems, from The Elephant Tests and hydrodaktulopsychicharmonica, and felt privileged to have been part of such an inspiring evening. The icing on the cake was that Barry donated £50 of the takings to Ovarian Cancer Research, for which I'm doing a 21-mile walk on Sunday. I'm very grateful for his support, and if you want to add your own donation, you can do so here.
Posted by Matt Merritt at 10:14 No comments:

A Great Valley Under The Stars 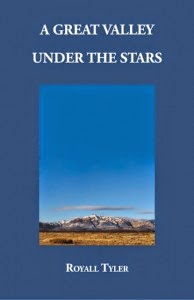 I bought this book, published by Isobar Press, at the Free Verse fair at the beginning of September, and have been enjoying it ever since. I have a slight obsession with New Mexico, with which large parts of the book are concerned, but Tyler delicately treads a path between being intimate, and encompassing the great wide open spaces of the American West in his work. Highly recommended.
Posted by Matt Merritt at 16:14 No comments: 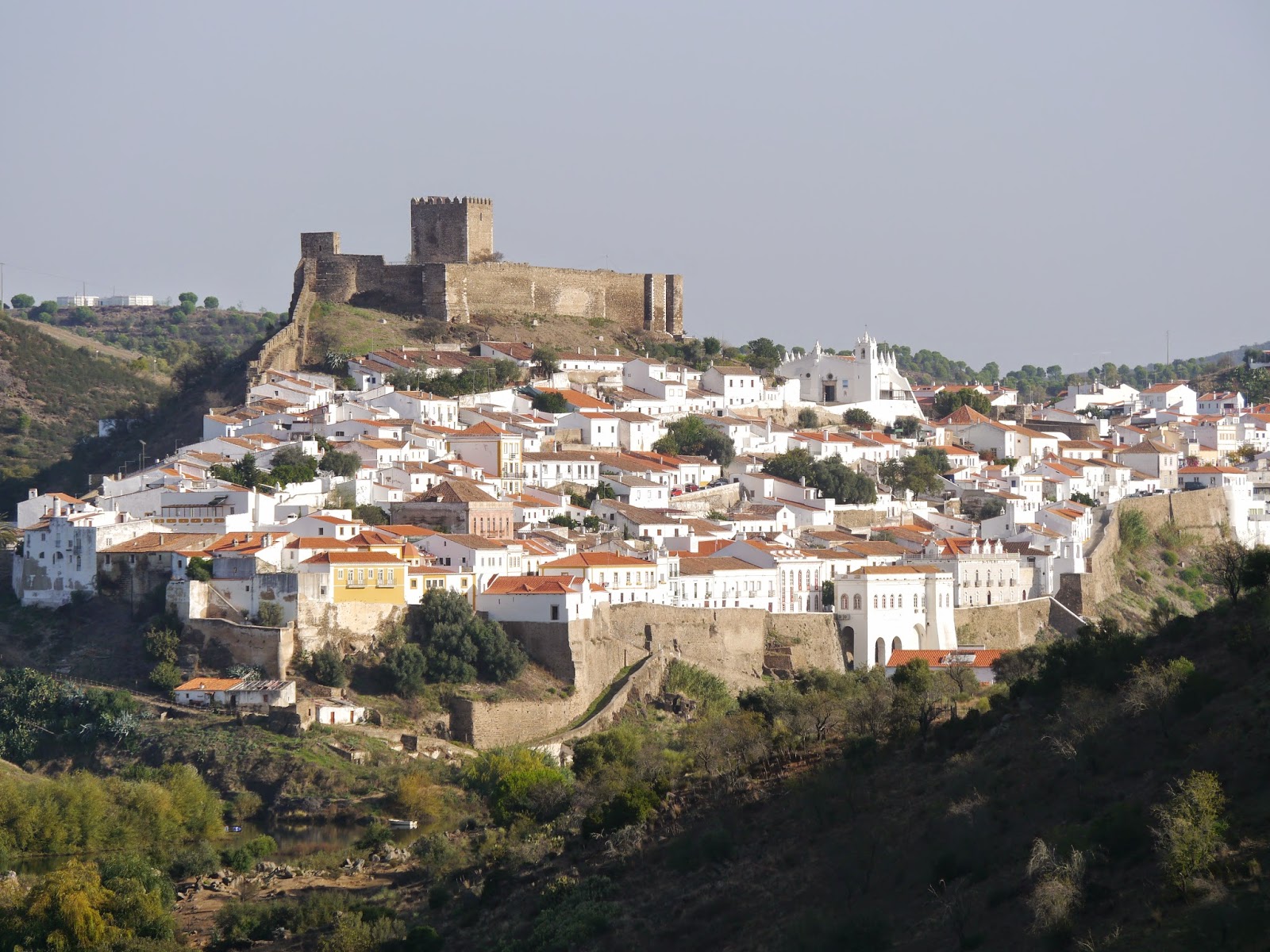 This is Mertola, a historic town in the Alentejo region of Portugal. I stayed there for a couple of nights last week, and as well as exploring the superb birdlife of the surrounding area, there was the chance to dig into the history of a settlement that has Roman, Moorish and medieval Christian remains.

I'll be posting a few photos from the town's museums over the next couple of weeks - to start with, here's a bowl from the Moorish period - the bird looks rather like a bustard, and both Great and Little Bustards can still be found in the area close to the town. 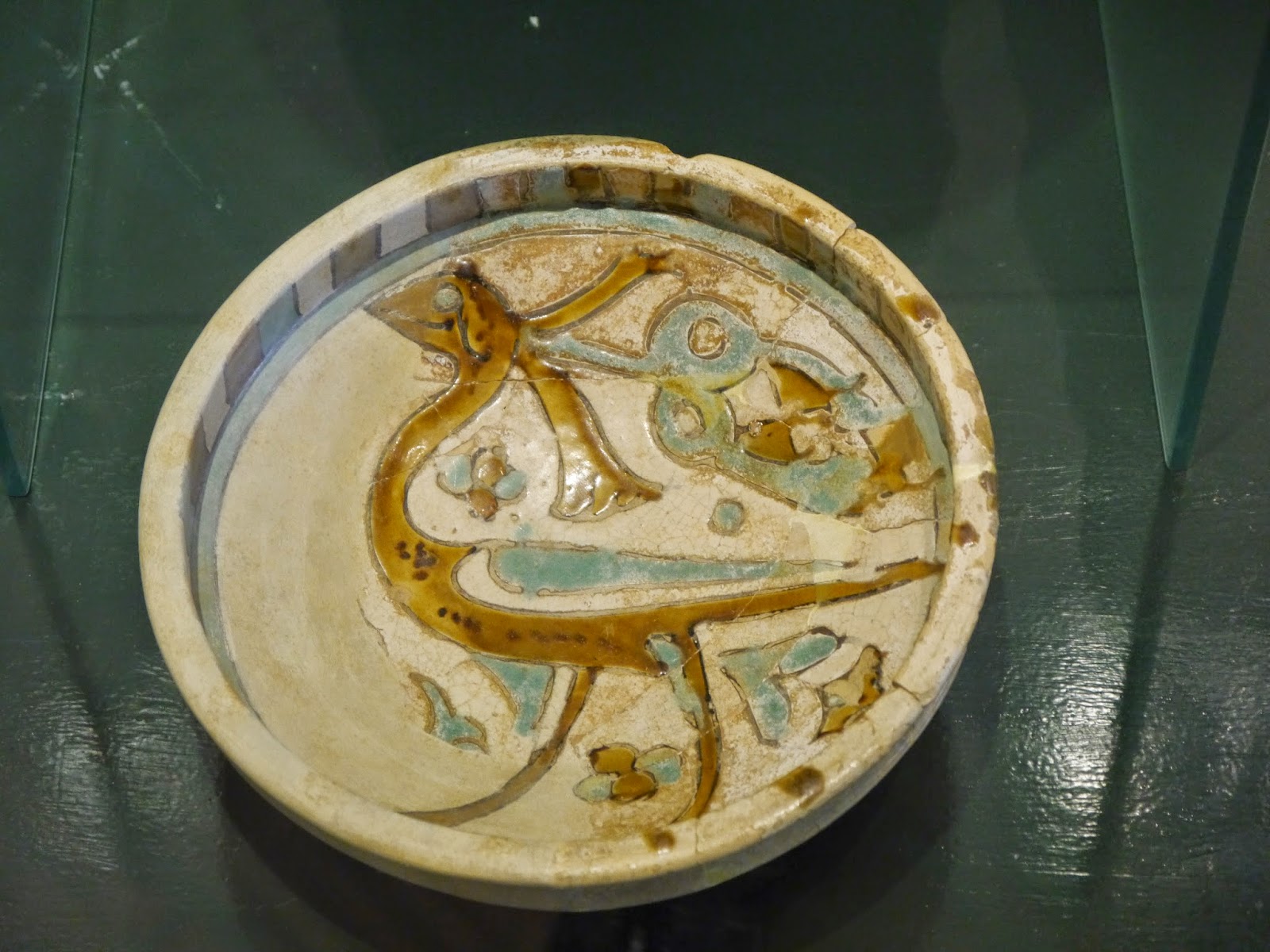 Posted by Matt Merritt at 13:00 No comments:

The fall-out from Kevin Pietersen's new book is all a bit depressing, if predictable, and while I doubt very much that he's telling the whole story, I think it's also probably safe to assume that there's at least some truth in what he alleges about the culture within the England dressing-room.

If so, it raises questions about the management of the England set-up - not so much the coach, but those above him. If there really was a culture of bullying, then they're the ones who should have identified it and stamped it out.

If it was a cliquey culture of certain senior players lording it over the rest, well, that's a bit different. It's probably not ideal, but it's also probably no different to every other sports team, professional and amateur, around the world. Team spirit is, if not exactly overrated, certainly very different to how it is usually painted. In any team, you're going to have players who don't get along, who openly dislike each other, even. It doesn't matter. All that matters is that they're able to put that behind them while they're on the field, and play for the team. Look at Shane Warne, in the great Australian team he played in. He never bought into the visible team-bonding exercises, openly mocked the coach at times, and fell out with more than one captain. It didn't stop him playing at his best, and helping the team to play at their best. I once played in a local league team in which, the season we won the league, our two key players loathed each other off the field. On it, they put that aside and won game after game for us (one was a bowler, the other a wicket-keeper).

This is where KP's story falls down a bit, too. His villain of the piece, Matt Prior, might very well be all or some of the things he alleges off the field, but on it he was always a notably unselfish player. Maybe KP should simply have got on with it.

Equally, though, English cricket has a bad record of accommodating anyone out of the ordinary. While KP has predecessors in the 'too selfish' camp (Boycott, I hear you cry), we've also tended to mistrust the eccentric (Derek Randall), the slightly rotund (Mark Ealham, Samit Patel), the hard-headed professional (Brian Close), and the apparently (but not really) too laid-back (David Gower, Tom Graveney). Maybe English cricket, too, needs to learn to just get on with it.
Posted by Matt Merritt at 16:36 No comments: