The Guardian had this interesting list yesterday. It includes three personal favourites - The Owl Service, Bruce Chatwin's On The Black Hill (and the writer here neatly encapsulates what makes it such a fine book), and of course RS Thomas's Collected Poems.

As with any list, though, there are bound to be controversial omissions and inclusions. Nothing by Raymond Williams, for example. Anyone got any other suggestions for what might have been included?
Posted by Matt Merritt at 10:26 3 comments:

Last Thursday's Vanguard Readings event, at The Bear, Camberwell, was a lot of fun. Six readers, of which I was one, a lively and very responsive audience, and a great venue.

It was great to hear Josephine Corcoran read. She's been such a tireless promoter of other's work that her own poetry has sometimes been overshadowed, and very unfairly so. I enjoyed her honeymoon poem in particular, but her whole set promised good things from her forthcoming Tall Lighthouse pamphlet.

I'd never heard Josephine Dickinson before, but I have read plenty of her very fine work, and it was given a whole new dimension by her reading here. She's one of those poets who manages to create an enviable stillness and silence around her words - there's a tension there that always feels as though it's on the point of breaking.

Michael Symmons Roberts read beautifully, mainly from his most recent collection, Drysalter, and it's hard to add anything useful to the praise that it, and he, have already received. His poems are always spiritually charged, yet intimate and approachable too.

Cristina Newton read just two long poems, and held everybody spellbound with the sustained music of her work - I look forward to reading and hearing more from her.

Finally, Richard Skinner, whose hard work makes Vanguard happen in the first place, read the work of three absent poets who appear in the Vanguard anthology - it's not on general sale but you will be able to buy it at future readings, and I recommend it very highly.

My own reading went well, and it was good to read a couple of poems, including Butterflies from the afore-mentioned anthology, that haven't had an airing for a while.
Posted by Matt Merritt at 11:25 No comments:

If you're anywhere in the area, come along - as well as the poetry, there's good beer and food available, and entry is free.

I'm not entirely sure how long the Leicester Shindigs have been going. I could check, probably, by trawling back through this blog, but suffice it to say that it's been a good few years, from the early days at The Looking Glass to its current incarnation at The Western.

Whatever the case, last night's might just have been the best yet. Certainly top three, anyway. Four excellent readers, packed open mic slots, and an extremely appreciative audience. Kudos to Nine Arches Press and Crystal Clear Creators for all their work in building the event over the years, and to Jane Commane and Jonathan Taylor for their unflagging enthusiasm as hosts.

Let's start with the open mic. So many were signed up that the readers were restricted to a single poem (or in one case, piece of fiction) each, and that kept things flowing nicely. Regulars such as Roy Marshall, Jayne Stanton, Martin Malone and Charles Lauder Jr were reliably high quality, but there was a heartening number of first-timers, too.

The first guest, Michael W Thomas, was making his return after reading here a couple of years back. As then (when he read a superb poem about the secret language of tramps), he was quietly assured and utterly riveting. I'm always pleased to come across one of Michael's poems in a magazine (and fortunately, he's in plenty), and I rather hope that he's one of those small press poets who's actually widely read as a consequence of his prolific nature, his willingness to offer his work in a wide variety of outlets, and of course his skill as a writer.

Ben Wilkinson's pamphlet For Real, winner of the Poetry Business competition, was a real advance on the anyway highly accomplished The Sparks, and his reading from it confirmed all those good first impressions. It's poetry that thinks very hard about what poetry can do, but it's never less than accessible and engaged with the real world.

After the break, DA Prince read from her recently-released second collection, Common Ground. She's another poet who manages to be understated and precise without diminishing the emotional punch, and she read the same way, giving every word the chance to pull its weight.

Andrew Taylor brought the evening to a close with poems from his debut, Radio Mast Horizon, as well as two forthcoming chapbooks - his poems also work quietly, and perhaps with more of a cumulative effect than the other readers, but again without sacrificing anything in the way of readability (or listenability, perhaps that should be). I look forward to reading more.

So, the only problem now is that Shindig had set itself a very high standard to maintain in 2015 - get along in January to see what's next.
Posted by Matt Merritt at 13:33 No comments:

It's a terrific venue, and a great line-up - I'm flattered to be part of it. The poetry starts at 7.30pm, and entry is free.

Posted by Matt Merritt at 09:18 No comments: 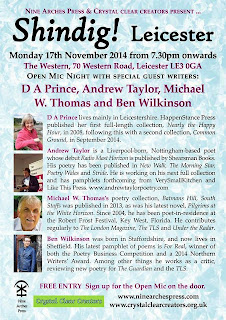 I enjoyed reading George Szirtes' piece on Clive James's Poetry Notebook, so flagging it up for your enjoyment is reason enough to be posting here.

Now I'll admit that I've never been the biggest fan of James's poetry or criticism, although that may have more to do with struggling to forgive him for inflicting Margarita Pracatan, a joke of approximately 30 seconds duration, on a helpless nation for what seemed like years. I should put those prejudices aside and give him another go, and George's article makes a very good case for that.

Anyway, to the main point of my post. He describes James's poetry thus: "...full of an energy that is partly Augustan but racier, as if Dr Johnson had sealed a pact with the 19th-century poet Winthrop Mackworth Praed".

The worthy Mr Praed is an ancestor of mine, on my mother's side of the family - I have cousins with Praed as a middle name, and the Praeds can still be found down in Cornwall around St Michael's Mount. I haven't, to my shame, read much of old Winthrop's work, but that's something else I'll put right soon.
Posted by Matt Merritt at 14:12 No comments: