I've been reading Jack Gilbert's Collected Poems on and off over the last few months, and have enjoyed it a great deal. One of the poems that had drawn my attention to the book was this. There's a lot that I like about it, but having re-read it a couple of times, something struck me.

It's that "It's strange that she has returned / as somebody's dalmation". For me, that flags up exactly where the poem is going far too early, and undermines the impact of the final sentence. I'd prefer him to have introduced the man and dog more matter-of-factly.

So, I've been trying to think of any other poems that, for me, are close to being absolute gems, but where a single line or even word ruins things ever so slightly. I haven't come up with any yet, but I will. Can you?
Posted by Matt Merritt at 09:16 No comments:

The Horseman's Word, by Roger Garfitt 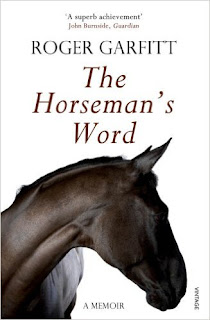 I found this in a secondhand bookshop for a couple of quid, and was intrigued enough to buy it. I'd come across Roger Garfitt's poetry once or twice previously – I remember enjoying a relatively recent sequence called (I think) Border Songs – but I really didn't know too much about him, so pretty much everything in this memoir was new to me.

The sections recounting his childhood, first in Heacham, Norfolk (an are I know well), and later in Surrey, where his father had opened a stables and riding school, are beautifully written, full of arresting but unshowy turns of phrase. He's particularly good at drawing characters in detail, especially his own grandparents, and he also takes careful note of the subtle and often deeply damaging stratification of rural society.

When he gets to Oxford, the book got a little less engaging, for me, as Garfitt's story seemed to be a fairly unremarkable one (for the 60s) of relatively mild drug experimentation and a succession of romantic complications. But in fact that just sets you up, as a reader, for the most startling part of the book, as he suffers several breakdowns. The passages in which he descends into madness, while roaming London, are both terrifying and enervating. Even though you know it's coming (because of the blurbs, among other things), it's a surprise, as you realise that what initially seemed like merely eccentric youthful behaviour tips over into something more frightening.

One criticism is that the book does fizzle out a little towards the end, and it might have been interesting to know more about what caused Garfitt's mental health problems, and how they were resolved, or contained. But perhaps that's the point – the way the book is written, you get more of a sense of how mental illness can strike without any obvious warning.
Posted by Matt Merritt at 13:09 No comments: 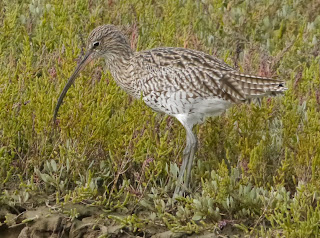 Curlews might be just about my favourite birds, so I'll use any excuse to watch them, photograph them, write about them, read about them, talk about them, or all five. This one was picking crabs from one of the saltwater channels near a hide at Rye Harbour a few weeks ago, when I was down around Dungeness for a couple of days.

They also always make me think of Ted Hughes, because they crop up in his poems fairly regularly. Here's an early poem of his, The Horses, in which they feature.
Posted by Matt Merritt at 09:29 No comments:

Some birds from Mallorca 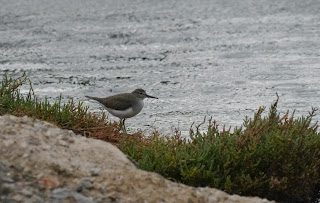 Last weekend, I was lucky enough to be in northern Mallorca for work. It's a great place to go birding, because you've got a huge variety of habitat just a few minutes away from the towns of Port de Pollenca and Alcudia. The former even has a great little urban reserve, La Gola, just back from the seafront – the Common Sandpiper above was there when we arrived, on a drizzly morning. 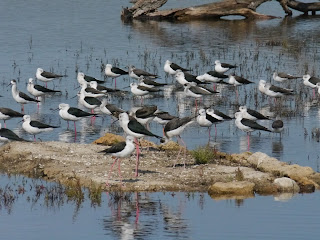 The Black-winged Stilts above and below were at the famous Albufera reserve – we also saw Kentish Plover, Greenshank, Spotted Redshank, Booted Eagle, Green Sandpiper, Kingfisher, Red-knobbed Coot (don't laugh) and Shag (oh, come on!) there, among others. At s'Abufereta, another wetland reserve nearby, we'd already ticked Great White Egret, Cattle Egret, Sardinian Warbler, Marsh Harrier and Whinchat, plus many of the same waders, and a rather odd-looking shorebird that I finally concluded was just a less than typical Dunlin. 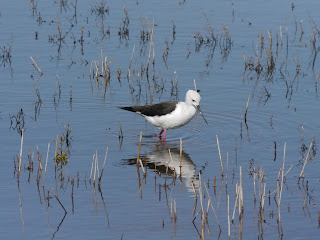 Back in Port de Pollenca, Black Redstarts like the one below were plentiful – in fact, there were a lot around pretty much everywhere we went. Also interesting was the number of Robins, more than I've ever seen in one place before. Presumably at least some of them are northern European, and possibly British, birds, that have migrated to warmer climes for the winter. 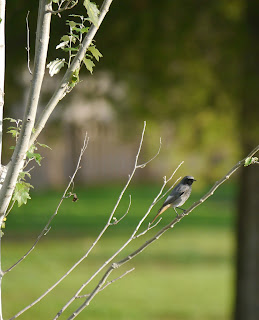 Finally, northern Mallorca is just about the easiest place in Europe to see Eleonora's Falcon (below), a raptor that delays its breeding until autumn so that it can take advantage of the glut of small songbirds passing through on migration. They nest on sea cliffs and pick the tired migrants off as they come in, sometimes virtually off the surface of the sea. I'm no photographer, so it was hard to get any decent pics of them, but I found it interesting how relatively easy it was to ID them – they immediately look longer-winged than Peregrines, with a much flappier flight style, but they're larger than Hobbies. We were lucky in that on a couple of the occasions we saw them, we had a Peregrine in the air nearby at the time, for instant comparison. 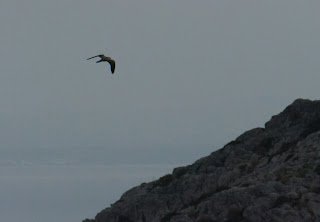 Posted by Matt Merritt at 14:20 No comments:

The shortlist for the TS Eliot Prize has been announced, and there are full details here. Good to see Denise Riley, Ian Duhig and Bernard O'Donoghue on there (I've read and enjoyed all three books), and I look forward to reading a few of the others, too. JO Morgan is an interesting, and refreshing, inclusion too.
Posted by Matt Merritt at 09:48 No comments:

Birds on the move 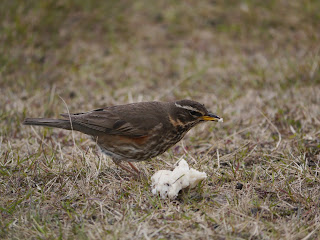 If you're lucky enough to live in Scotland, or along the Solway Firth, or on the coast of East Anglia, that can mean huge flocks of wild geese winging in from their Arctic breeding grounds. Waders, too, from the same direction. At some of Britain's migration (and twitching) hotspots, the last couple of weeks have seen a flurry of rarities, including Britain's first-ever Siberian Accentor. And then the second. And the third. And the fourth. And the fifth.

Inland, an invasion of Yellow-browed Warblers has been taking place. These tiny sprites are regular winter visitors, but scarce, and can be easily overlooked unless you learn their high-pitched call, as they can easily tag along with flocks of Goldcrests and other small birds.

But if you're a casual birdwatcher (and that's what I've been for the last couple of weeks), there's one sure sign that autumn is really with us. Redwings. That's one above. And before an eagle-eyed viewer points it out, that's actually one from the Icelandic subspecies. They're a little darker, and bigger, and can pop up over here, although most that we see in the UK come from Norway and Sweden.

Earlier in the week, I woke in the early hours. Our bedroom is in the loft, and the skylight was slightly open. I could hear a thin, hissing sound, 'tseeep, tseeep', and then I was asleep again.

But the next morning, on the way to work, little flocks of 30-40 birds were skimming over the fields everywhere. They're Starling-sized, but the wings are more swept back, the outline just that bit more streamlined, and they're much more tied to farmland, although you might get a few in the garden if you've got a lot of berry-bearing shrubs and trees, or if you leave some windfall apples around.

As yet, I've seen no Fieldfares, so often the close companions of the Redwings, but they'll be here, no doubt, in the next few days. And the leaves will keep falling, and the birds will keep returning and departing, and it'll be spring again before you know it.
Posted by Matt Merritt at 15:46 No comments:

In conversation with Simon Barnes

Tomorrow (Thursday, October 6th), I'm going to be chatting with Simon Barnes at Daunt Books, Marylebone, as part of their Book Festival.

He, of course, is both a renowned sports writer and the author of a number of terrific natural history books, perhaps most notably How To Be A Bad Birdwatcher, which I recommend to anyone. It's beautifully written and truly inspirational, as is his new book, The Meaning of Birds, which manages to pack a wealth of scientific information into its pages yet still find the time and space to veer off into the poetic and metaphysical.

Simon Barnes is, above all, the standard-bearer for the sort of birdwatching that I love, the kind that recognises that taking a straightforward delight in the birds in front of you is sometimes just as important as other considerations, such as conservation or acquiring knowledge.

A Sky Full Of Birds reviewed by Shropshire Birder

Bird photographer Jim Almond has reviewed A Sky Full Of Birds on his blog here - I'm very grateful to him for such a generous and full appraisal of the book.

While you're at it, follow the link on the blog to Jim's main website, for some stunning bird images, I particularly enjoyed the selection of waders.
Posted by Matt Merritt at 08:45 No comments: