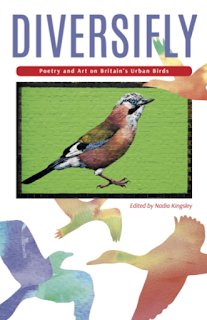 This rather splendid book is out a week tomorrow, February 8th (the web page hasn't been updated yet), and as you'll see, it comes with a whole-hearted recommendation from me. As well as commissioned poems from the likes of Carrie Etter, James Sheard and Andrew McMillan, there's a lot of really fine work by other familiar and not-so-familiar names. The artwork is excellent, too, and there's a foreword by Brett Westwood. Enjoy!
Posted by Matt Merritt at 12:31 1 comment:

Adrian Slatcher on The Fall

I don't know enough of The Fall's work to write anything remotely coherent about them – I've dipped in and out over the years and found stuff I've loved and stuff I've hated. But Adrian Slatcher has written an excellent blog about them here. I enjoyed reading it then started to explore some of the tracks and albums mentioned.
Posted by Matt Merritt at 10:39 1 comment:

The winter issue of Under The Radar is available from the Nine Arches Press online shop here – you can also buy four-issue subscriptions.

You can see the list of featured poets here, and of course there's also short fiction and reviews of poetry collections. I won't start picking out names here, but suffice to say that I'm delighted we managed to get such a strong selection of poets and poems for this issue.
Posted by Matt Merritt at 08:24 No comments:

Interesting judging panel for this year's Forward Prizes for Poetry – Bidisha, Mimi Khalvati, Chris McCabe, Niall Campbell and Jen Campbell. There's a link there for entries, but essentially editors have until March 9 (through Submittable), or March 23 (for physical copies).
Posted by Matt Merritt at 12:08 No comments:

This year's TS Eliot Prize winner is Ocean Vuong, for his debut collection Night Sky With Exit Wounds. I haven't read it yet, but I'll look forward to it. As always, there's been some debate on Facebook and other online forums about whether or not judges Bill Herbert, James Lasdun and Helen Mort chosen the right winner, but that's pretty much par for the course with such awards and competitions – the fact that they at least get people talking about contemporary poetry is partly the point of them, surely?
Posted by Matt Merritt at 14:56 1 comment:

I came across this earlier today – Land Lines are looking to find the UK's favourite nature book. They're all excellent, as you'd expect, but there's three in there that I'd find very very hard to separate – The Peregrine, John Clare's Selected Poems, and of course The Natural History of Selborne. But I'd have to go for JA Baker's masterpiece, in the end.
Posted by Matt Merritt at 13:07 2 comments:

Another excellent review at Litter, with Steve Spence discussing Peter Dent's new collection about the Rendlesham Forest Incident. I've liked what I've read of Dent's work in the past, and I've also got a bit of a soft spot for UFO-related mysteries.
Posted by Matt Merritt at 16:34 No comments:

I really enjoyed reading this review of Trevor Joyce's Selected Poems by Martin Stannard, over at the always readable Litter. It says all sorts of interesting things about mainstream poetry, non-mainstream poetry, and what Stannard wants to find in poetry. As always, plenty to agree and disagree with, but isn't that what a review should do?
Posted by Matt Merritt at 08:52 2 comments:

Out on the Washes

I had some binocular and scope testing to do yesterday, so I took myself off into the Fens to do it. Perfect, really – wide horizons, plenty of fencelines and ditches to help judge distance, and a misty murk in which you get to see the difference that top-end Austrian and German optical technology can make.

I had some hopes of seeing the Rough-legged Buzzard that has been around Parson Drove, or the Bramblings that have hung around nearby, but I missed out on both, so to finish the testing I headed over to Eldernell at dusk.

I'm glad I did. The flooded Nene Washes were a mass of wildfowl, with the air full of the whistling of Wigeon and the hollering of Whooper Swans. A Marsh Harrier glided past, and just as I was packing up to leave, a Short-eared Owl quartered the nearest meadow then perched on a gatepost, its yellow eyes standing out from the many shades of brown and grey around it.

It's hard to believe, standing atop the grass bank there, looking out over this enormous wetland teeming with birdlife, that you're only a few miles outside a major city. It's a strange landscape, being very much shaped by man, despite the fact that here, at least, the river is allowed to overflow annually. But it has something that many British wildlife sites (and sights) don't – scale. You can stand there and be convinced that there's nothing in the world other than you and thousands upon thousands of birds.

The Snettisham 'spectacular' is one natural event that does rival this for size, and now's just about the best time to see it at the RSPB reserve in Norfolk. If you want to know more about it, you could always read about it in my book, A Sky Full Of Birds.

Starting as I mean to go on

I thought I'd make a few New Year resolutions for a change, one of which is to finally try to write a novel that's been rattling round my head for years. I'm setting myself to write 3000 words a week until it's done, which sounds manageable until you actually sit down and attempt to write it.

Another is to knock something resembling another poetry collection into shape – I've got most of it reasonably finished, but there are maybe half a dozen key poems that need serious work.

I've made a slow start to both, with a lunchtime walk today logging a couple of miles, and 24 species, mainly from my own garden and from the daily commute. Things will really start in earnest at the weekend.

I downloaded the OS app to log all my walks on, and also came across this, rather appropriately given that it's JRR Tolkien's birthday today. It's a much bigger challenge, especially if you have to walk across the Dead Marshes with the Eye of Sauron on you, but still, it's worth a try.
Posted by Matt Merritt at 17:01 1 comment: