I was interested to read this piece on the UK's top hidden city spots, and pleased to see Moseley Bog come out of it so well. It's a wonderful place, like nearby Sarehole Mill, with which it shares the distinction of having inspired the young JRR Tolkien. In both places, it's hard to believe that you're so near to the centre of a major European city.

The definition of 'hidden' is fairly loose, and one slight disappointment is that they seem to have chosen from a fairly restricted list of cities. I would, I confess, be struggling to make a case for anywhere in my home city, Leicester, but I can think of very worthy candidates in any of three other cities I know pretty well - Nottingham, Newcastle and Cardiff. I'd be interested to hear of other worthy locations from readers.

A couple of weeks back, I was down in London to meet one of Bird Watching's long-standing contributors, David Lindo (AKA The Urban Birder). He took me for a morning stroll around his local patch, Wormwood Scrubs, and I was staggered not only by the variety of the bird life that we saw, within a stone's throw of the Westway and the hustle and bustle of West London, but how quiet it was, both in terms of sound (less than outside my house on an average morning) and seeing other people (we encountered a dozen at most).

Cities need these little oases of calm and green, or rather city-dwellers do, so it's depressing to see that not only is the Scrubs being mooted as the site for a major open-air concert later this year, but it's also under threat from HS2. You can find out more about it at the Save Our Scrubs site here, and sign a petition to preserve this hidden gem.
Posted by Matt Merritt at 08:48 No comments:

Very reasonable entry fee, good prizes, and it all goes to support the very popular monthly Cafe Writers reading/open mic slots in Norwich. This year's judge is the wonderful David Morley, so you've all got until the end of November to come up with something to impress him.
Posted by Matt Merritt at 12:14 2 comments:

Edward Thomas at Out There With The Birds

I've got some musings about bird names, poetry and Edward Thomas up at Out There With The Birds - as always, take the time to have a browse of this really fine blog, and enjoy great writing on birds from around the globe.
Posted by Matt Merritt at 09:19 No comments:

Labels: Birds, Edward Thomas, Out There With The Birds 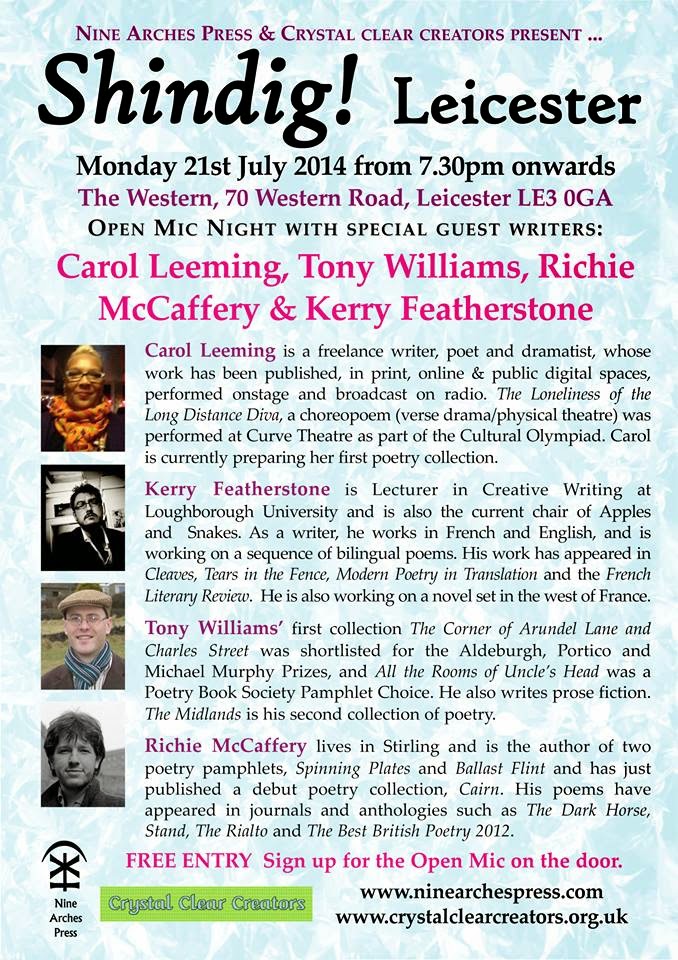 It's Shindig time again on Monday, with guest readers Carol Leeming, Tony Williams, Richie McCaffery and Kerry Featherstone. As always, it's free, everything starts at 7.30pm, downstairs at The Western, on Western Road, and open mic slots will be available on the night.
Posted by Matt Merritt at 07:39 No comments:

Nice piece here about the success of Jo Bell's 52 project, which aims to get poets writing a poem a week in response to a series of prompts. The Facebook group now has 560 members, and they're really producing some fine work, much of which is now getting published in mags, etc.
Posted by Matt Merritt at 07:52 No comments:

A walking reading with Tony Williams

It's to help launch Tony's splendid new Nine Arches collection, The Midlands, and it's free, but places are limited and should be booked in advance here.

We're meeting at the Visitor Centre from 1.30pm, with the walk to start at 2pm. We'll stroll around this superb reserve in search of wildlife, and no doubt people-watching too, stop every now and then to read a poem or two, and then return to the centre at 4pm for more reading - I've been enjoying Tony's book this week and it really is worth hearing out loud.

If you get there early, I should add, the Visitor Centre usually has a magnificent array of cakes.
Posted by Matt Merritt at 07:48 No comments:

The Summer 2014 edition of Black Box Manifold is out now - I've enjoyed the poems by Peter Hughes, Kelvin Corcoran and Martin Malone so far, but there are plenty of other names worth investigating, plus a review of the anthology Dear World And Everyone In It. Enjoy!
Posted by Matt Merritt at 12:24 No comments:

Nice article here from Sidharth Monga, about tracking down Harold Larwood, arguably the greatest fast bowler ever to play for England. He ends up at Kirkby Portland CC - I've trudged around their outfield a few times in the past, sustained by the thought of following in a legend's footsteps (and by the excellent teas).
Posted by Matt Merritt at 08:18 No comments:

I'll be reading with my fellow Nine Arches poet, Angela France, at Cannon Poets, Moseley, Birmingham, tomorrow night. There will, of course, be an opportunity to buy copies of The Elephant Tests, should you want to.

The reading takes place in the Moseley Exchange, in the Post Office Building, starting at 7.30pm, and as well as the poetry there's music from Flootsweet.
Posted by Matt Merritt at 06:20 No comments:

The final Jazz & Poetry for the time being (it will return in October with the launch of Mahendra Solankia's second collection The Lies We Tell), takes place next Wednesday, July 16th, at the Guitar Bar, Clumber Avenue, Nottingham NG5.

Entry is free but donations are encouraged, and of course there's jazz from Four In The Bar (including special guests).
Posted by Matt Merritt at 10:30 No comments:

The Elephant Tests reviewed at Stride

Over at the online magazine Stride, which remains one of my most regular browsing places on the net, The Elephant Tests has been reviewed very kindly by Alasdair Paterson - it's always nice to get a good review from someone whose own poetry you like a lot.

Also reviewed are Angela France, Patricia Debney, Richard Skinner, Jennifer Copley, and Ian Brinton & Michael Grant - that's pretty nice company to be in, too. There's a lot of food for thought in this piece, and at least a couple of books to add to the 'To Buy' list.
Posted by Matt Merritt at 10:16 No comments:

This Sunday, July 6th, I'll be reading with Judi Sutherland at the Ampthill Festival, Bedfordshire. We'll be in the Literary Marquee, from 2.45pm, and I'll have copies of The Elephant Tests to buy, if the fancy takes you (also a few copies of hydrodaktulopsychicharmonica). Hope to see you there.
Posted by Matt Merritt at 10:11 No comments: