The King In Yellow

I'd read a lot of Twitter and Facebook posts praising True Detective to the heavens, so I recorded the first episode when it made its UK debut last weekend, and thoroughly enjoyed it.

It's a slow-burner, and inevitably there's a lot of scene-setting, but there was a real sense of menace and impending doom all the way through, so it didn't really surprise me to read this article this morning, about the links between the series and Robert W Chambers' classic 1895 collection of short stories. It's a long time since I read it, but I'll have to get hold of a copy - interesting to see that new electronic versions have already been rushed out in response to the publicity through the show.

I'm going to be interested to see how far down the Lovecraftian route True Detective goes - my guess is that it'll steer clear of the explicitly supernatural, and instead explore the 'cosmic horror' that HPL was so fond of - the Matthew McConaughey character already has the look and sound of one of his protagonists, a man who'd probably prefer not to piece together the sum of his knowledge.
Posted by Matt Merritt at 13:44 No comments:

The excellent Roy Marshall invited me to take part in this tour of poetry blogs. How does it work? Well, I answer four standard questions about my own work, then link to the blogs of three more poets, who will answer the same questions over the next few weeks.

Now, you'll notice that there are just two links posted so far - to Gill McEvoy and Tim Love. That's because most of the poets I know had already been approached. If you'd like to take part, then, drop me a line, and I'll add your link. Anyway, here goes...

What am I working on?
I've been working with a photographer, Phil Harris, on a project looking at landscape and particularly the landscape of John Clare's poetry, although it's started to take us down some quite different routes, too. It's been a really exciting and challenging way of working - neither of us wants to end up effectively illustrating each other's work, so we've just been figuring stuff out as we go along.

I've also got a long-standing sequence that I've been working on, and that I'm thinking of polishing up and sending out to pamphlet publishers some time this year.

Alongside both of those I've been writing some very occasional occasional poems, but it's pretty slow going (for reasons that will become clear later in this post).

Finally, I'm planning a prose project - if it gets approved, it would certainly feed into my poetry, I think, so I'm looking forward to working on it.

How does my work differ from others in the genre?
Hmmm. Difficult, and probably not really for me to say. I'm always slightly conscious that, not having done an English or Creative Writing degree, my reading of poetry has been a bit haphazard (although voracious), so maybe that shows up in my own work, but I'm not sure. I do tend to write a lot of nature poems, too, and for the most part I tend to dislike enlisting birds or animals or whatever for obvious symbolic or metaphorical effect, but having said that my latest book, The Elephant Tests, contains several very obviously symbolic elephants (I know next to nothing about the actual animals).

Why do I write what I write?
Well, I suppose I'd say because I have to, although that can end up sounding a bit pretentious. I do get physically uneasy when I have something I want to write but work or whatever else is getting in the way.

As regards subject matter it does tend, for the most part, to be rooted in the subject areas I know most about, although I'd also say that by doing so I find out more about them. I'm interested in the potential of all the arts to change attitudes about environmental issues (this is something that New Networks for Nature has pioneered), so that has been increasingly important in driving my work, I think, but it is very much about the poetry first and foremost - I don't like the idea of browbeating readers at all.

How does your writing process work?
It's changed quite a bit over the years, and continues to change. I make notes for poems all the time, and although I like a Moleskine as much as the next person, I scribble on any scrap of paper to hand. More and more I also make notes on my phone or iPad. More and more, too, I remind myself to write something, anything, including blog posts, diary entries, etc., rather than waiting around for inspiration. I mine a lot of my other writing for poetry 'prompts' and ideas.

Having done that, I usually write the first full draft by hand, then later put it on my PC. I've been trying to take far longer over revising poems, giving myself a set period to let them 'mature', so I'll then go back to a piece a few times over several months. I generally have quite a few poems on the go at once, so I don't worry too much if one gets abandoned for a lengthy period - last week, I went back to a piece that had sat untouched for four years, and reworked and 'finished' it within 10 minutes. I think the time away just made its flaws so obvious, as well as the potential solutions.

In physical terms, while I make notes all the time, I tend to do all the hard work in the evenings and at night. I'm not sure why, but I struggle to write poetry much before 6pm. I can't listen to music while I write, and I stay away from Twitter and Facebook, but I sometimes quite like having something undemanding on the TV or radio, such as cricket or snooker, that I can dip in and out of.

I've been terrible at updating this blog recently, but intend to do much better, starting with last night's Poetry Alight reading at Lichfield.

In the new venue of the King's Head, the upstairs room is just about spot-on for a night of this type - large enough that you're not all piled in on top of each other, even with an excellent turn-out like last night's, but compact enough that you can hear the poets read without any trouble.

Gary Longden hosts it superbly, and I liked the format of open mic slots to begin and end the evening, as well as between the featured guests in the middle. Importantly, too, there was time to talk. Feeling part of a poetry community is a more important aspect of events like this than it's sometimes given credit for, but here we all went home having had the chance to make new friends and catch up with old ones.

I didn't make notes, so I'm afraid I haven't got the names of most of the open mic readers, but a high standard was maintained throughout, not just by the familiar faces such as Tom Wyre and Malcolm Dewhirst.

Michelle Crosbie's feature set was excellent. She read entirely from memory, and even sang her last piece acapella, and I'd like to hear more of her work, as well as to see it on paper. She used rhyme skilfully, I thought (as did many of the open mic-ers) - not something that's easy to do, and something that an audience immediately picks up on if it's not done well.

I read entirely from The Elephant Tests, and Jo Bell helped me out on Ravens, Newborough Warren, reading the second voice. It was a pleasure to read for such an appreciative audience, and there was lots of good feedback later on (plus plenty of books sold).

Jo's own set was the highlight of the evening, taking in poems from the excellent Navigation (available again now), as well as newer material. She will, I hope, have a new book coming out before too long, burt in the meantime, take any opportunity you get to hear her read. She can flit between laugh-out-loud funny and lump-in-the-throat moving in the space of a line, and that's a rare thing indeed.
Posted by Matt Merritt at 13:24 No comments:

Next Tuesday (February 18th), I'm reading at Poetry Alight, in Lichfield, with the wonderful Jo Bell and Michelle Crosbie. It's a well-established and popular regular poetry night, complete with plenty of open mic slots, hosted by the excellent Gary Longden. I'm looking forward to reading in the city of Dr Johnson very much.

Just a word of warning - in case you haven't already noticed from following that link, it's at a new venue, the King's Head, 21 Bird Street, Lichfield, WS13 6PW. Hot food is available (always a bonus).

If you'd like to sign up for an open mic slot, email Lichfield.Poets@hotmail.co.uk as soon as possible, as they tend to get snapped up pretty quickly.
Posted by Matt Merritt at 09:59 No comments:

Writing In The Dark, by Richard Caddel 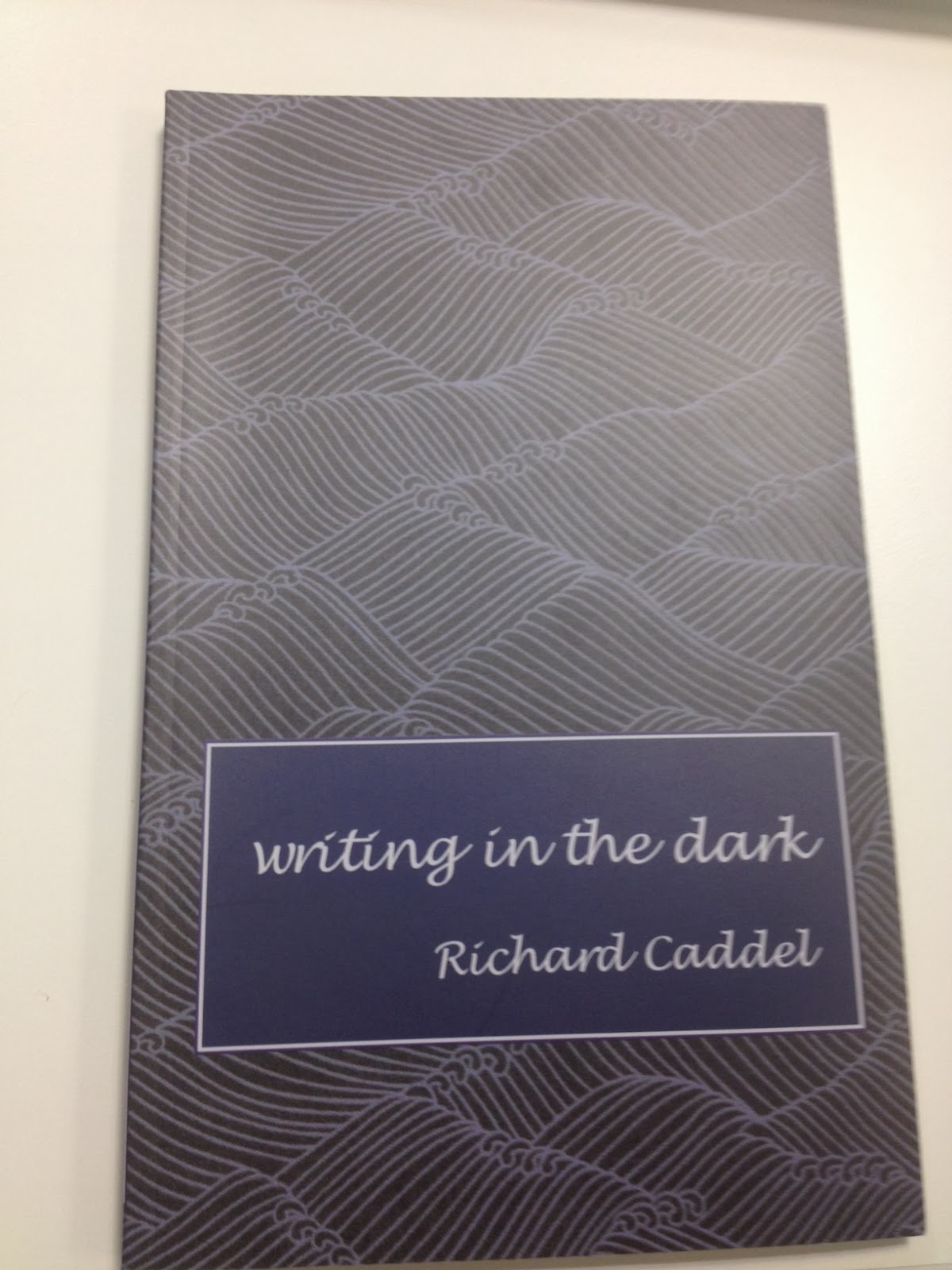 This arrived this morning - Alan Baker posted a link about it on Facebook last week, and it sounded right up my street. I enjoyed Caddel's Magpie Words - a selected poems - a few years back, but this had passed me by until now. I know I probably shouldn't be so bothered by the physical quality of books, too, but this is a very handsomely produced volume from West House Books, and that's always a good start. I suspect I'll be writing more about it over the next few weeks - can't wait to start reading it.
Posted by Matt Merritt at 07:54 2 comments: