Next Monday (July 1st) sees the launch reading for Magma 56, edited by Helen Mort and Julia Bird. The featured readers are David Morley and Jack Underwood, and as usual the evening also includes short readings from many of the other poets featured in this issue (myself included). As always, it's held at The Troubadour, Earl's Court. It's been a long while since I've been to one, and even longer since I featured in the magazine, so I'm looking forward to it a lot. And if any friends fancy meeting in London beforehand for a drink and a poetry chat, drop me a line.
Posted by Matt Merritt at 08:41 No comments:

My old friend Mark Howard Jones has a new book out now - Brightest Black is available on Amazon in both print and Kindle versions, and promises "16 stories, a hundred nightmares". I've written about Mark's work before, and his tales of the macabre, bizarre and downright dark go from strength to strength - as always there's an elegaic side to his writing that lifts it out of any neat genre pigeonhole (spurious as they generally are). As I've also said before, his work needs no other recommendation than that the late Ray Bradbury was a fan - it doesn't get much better than that.
Posted by Matt Merritt at 12:33 No comments:

An evening at Wordsmiths & Co

Yesterday, I tackled the A14 and the snarled-up Coventry ring road to get to Warwick Arts Centre. Gig-goers among you will know that it sits on the campus of Warwick University, and that the campus is actually nearer Coventry.

I've got a lot of fond memories of it because of some great gigs I've seen there. In fact, I'm pretty sure that the last time I was in the small theatre I was in last night, it was to see Julian Cope, which is always an experience.

This time, though, it was for the last of this season's Wordsmiths & Co shows, run by Nine Arches Press and Apples & Snakes. I'm hugely grateful to regular host Jo Bell for inviting me to join a line-up of Lorna Meehan, David Morley, and Luke Wright. To read with names like those would be a privilege and a pleasure anyway, but it's the format of the shows that really makes things special. Each poet does a short reading, and is then interviewed by Jo, turning it into a poetry talkshow.

Lorna read first - she's a classically trained actress, and uses her voice superbly. There's a lot of energy in her performance, but she allows the listener time to take in the subtler shifts of language, too - I only wish we could have heard more.

I read five poems from my forthcoming book, The Elephant Tests, and got a good response. I'm determined that, by the time I've done a couple more readings, I'll have memorised a hardcore of the poems from the book.

The interview part was great. Jo's questions were pretty searching without being obvious, and it's actually a good way of finding out exactly what you think about your own writing and methods etc. Certainly, driving home later, I found myself mentally expanding upon and revising my answers.

For a 'page poet', David Morley is a very physical performer of his work (for reasons he explained last night), but I think what really makes him so compelling to watch is that he leavens that with a great stillness when necessary. His John Clare themed poems from his forthcoming book The Gypsy and the Poet were superb - it'll be a must-read.

I've seen Luke Wright read a couple of times previously, and he's never less than hugely entertaining, but I think he continues to get better each time, not least because the satirical edge to his work is both sharper and yet somehow less obvious. In fact, he and David were both fascinating on the subject of poetry with "palpable designs" on the reader - if anything last night showed that their seemingly very different approaches shared a lot of similarities.

And that was that. If ever an evening was worth a bit of gridlock, this was it - I just hope the audience enjoyed it as much as we did. Just to prove it, here's a picture of a very happy line-up, post-show.
Posted by Matt Merritt at 12:45 No comments:

The chase is on 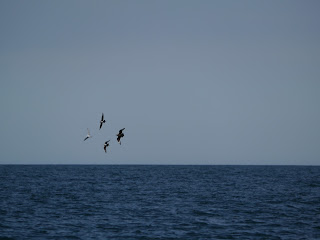 This is a terrible photo, my excuse being that it was at long range and I was sitting on a rocking boat when I took it, in the bay off Husavik, Iceland, a couple of weeks ago.

It shows an unfortunate Kittiwake (of which there were huge numbers) being pursued by a pair of Arctic Skuas, with a Great Skua waiting to rob them as soon as it gets the chance. The skuas usually force their victims to disgorge the contents of their crops, which they catch and eat in mid-air, although the Great Skua, or Bonxie, also regularly predates eggs and nestlings, or takes carrion.

We didn't see that many of either skua species, so it was exciting to see both together like this.
Posted by Matt Merritt at 17:36 No comments: 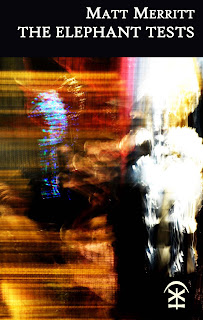 My new poetry collection, The Elephant Tests, is out from Nine Arches Press next month. You can read more about it here, and as with all Nine Arches titles you'll be able to buy it from the Inpress Online Shop. Recent additions to those titles include Angela France's Hide, Chris McCabe and Jeremy Reed's Whitehall Jackals, and Mario Petrucci's anima - I haven't seen the last of those yet, but I can recommend the other two very highly.
Posted by Matt Merritt at 13:02 2 comments:

I'm taking part in the latest instalment of Wordsmiths & Co, at Warwick Arts Centre, a week on Monday (June 17th) at 7.45pm.

It aims to feature poets you know from the pages of books and from the festival stages, with Jo encouraging us to spill secrets, tell tales and share the magic of words in an intimate performance space.

It's a collaboration between Nine Arches Press, Apples and Snakes and Warwick Arts Centre. You can read more about it and find out how to book tickets here, and there's also a chance to watch videos of the performances from Series 1 and 2 (this is the closing event of the latter).
Posted by Matt Merritt at 17:07 No comments: