There's a very interesting interview with Geoffrey Hill here, at The Isis. If I'm honest, when I read Hill it tends to be the earlier stuff, but I am gradually working my way through some of his more recent collections, and even when he's not entirely to my taste, he's his own poet. As he suggests in the interview, it's hard to see where he sits in the usually binary model of contemporary British poetry that usually gets talked about.
Posted by Matt Merritt at 08:00 No comments: 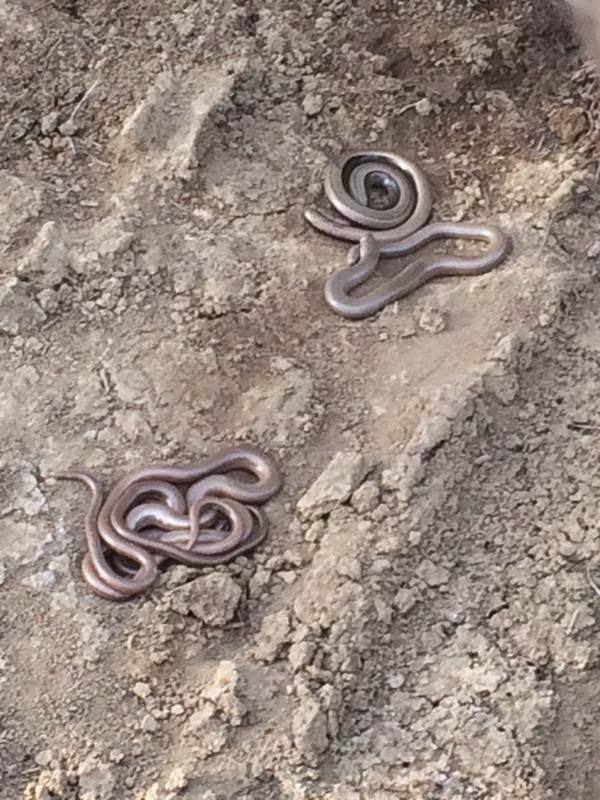 I was at the Knepp Castle Estate in West Sussex last night, for a Nightingale safari, of which more at a later date. There was plenty of other good wildlife at this extraordinary site, which is being progressively 'rewilded'. We heard Barn and Tawny Owls before the Nightingales resumed singing, and the reptile refuges had Grass Snakes of varying sizes, plus lots of Slow Worms.
Posted by Matt Merritt at 12:21 1 comment:

The great pleasure of a West Indies tour is that you can spend all evening with the cricket on in the corner of the room. The great drag, in recent years, has been that pitches there tend to be slow, low, and of a sort to encourage high-scoring draws. The one being used for the First Test at Antigua looks no different, although there was a hint of turn.

After England's early troubles, Ian Bell's hundred was as classy as you'd expect from him, while Joe Root's innings was equally full of admirable qualities, of which more in a minute. Ben Stokes, too, showed his time out of the side has been well spent, and confirmed the impression I've had of him for a while. When he's out of nick, or even for a few minutes at the start of most innings, he looks like a man who's never held a bat before. Once he's found form, though, he can look impossible to bowl to - at times yesterday he was hitting boundaries at will, without ever really seeming to let himself go. A fully functioning Stokes and Moeen Ali, plus Jos Buttler, would give England a lot of balance and the opportunity to play pretty much any combination of bowlers they wish, which has to be good.

I was disappointed, though, that Trott and Tredwell played ahead of Lyth and Rashid. Of course, they'll both probably make a nonsense of that in the rest of the series, but it smacks of a depressing conservatism and cautiousness. Tredwell's a fine player, but he's hardly the sort to rip through test line-ups, and he's not young. Rashid has done everything asked of him in recent years, and played a large part in Yorkshire's Championship win last year. And leg-spinners, as England surely remember, win test matches.

I've no problem with Trott coming back as such, but as things stand we have a top three that straight away surrenders all the initiative to the opposition bowlers. I'm not saying we need a Chris Gayle at the top of the order, but there needs to be someone there who can put a bit of pressure back on the bowling attack. Trott's sedate pace just puts pressure on Cook to play a game that doesn't come naturally to him, while Balance doesn't, despite his fine summer in 2014, look like a No.3 to me. He moves his feet too slowly and too little, and I suspect is going to be found out badly by Southee, Boult, Starc and Johnson.   I'd rather see other options explored now, otherwise we could have a miserable season in store.
Posted by Matt Merritt at 12:55 No comments:

On Thursday night, I was in London for the launch of Worple Press's anthology Map, which celebrates the 200th anniversary of William Smith's geological map of Britain.

It was an honour and a great pleasure to have been asked to contribute to the anthology, but even more so to hear the many poets involved read their work in the august surroundings of the Geological Society - Smith's map was hanging just outside, in the foyer.

It was good to catch up with Michael McKimm, who edited the book, and to meet Peter Carpenter, the man behind Worple (his own poem was one of my highlights of the night).

Lovely, too, to chat with Alison Brackenbury, Jane Commane, George Ttoouli, Isobel Dixon, Ailsa Holland and Julia Bird, and to meet Alan Buckley - his Red Rocks was another highlight.

There was great variety in the poetry being read, and it was a particular pleasure reading to an audience that, at least partly, came to the subject from another direction entirely. By which I mean they were geologists - I hope we didn't mangle the history and language of their science and one of its great pioneers.

I don't often do this. OK, there are plenty of famous writers, sports stars and other celebrities whose death would sadden me a great deal, but I'm wary of saying too much, because how much do any of us really know these people? I tend to think that the mourning, the real mourning, should be left to the families

But the death of Richie Benaud earlier today is different, for me. Having been cricket-mad since the David Steele summer of 1975, I can honestly think of absolutely no one I've had a more lasting and total admiration of.

I've written about him on here before, at some length, and I can't really add much to what I said back then. Thanks for everything, Richie. We'll never see your like again.
Posted by Matt Merritt at 14:01 1 comment: 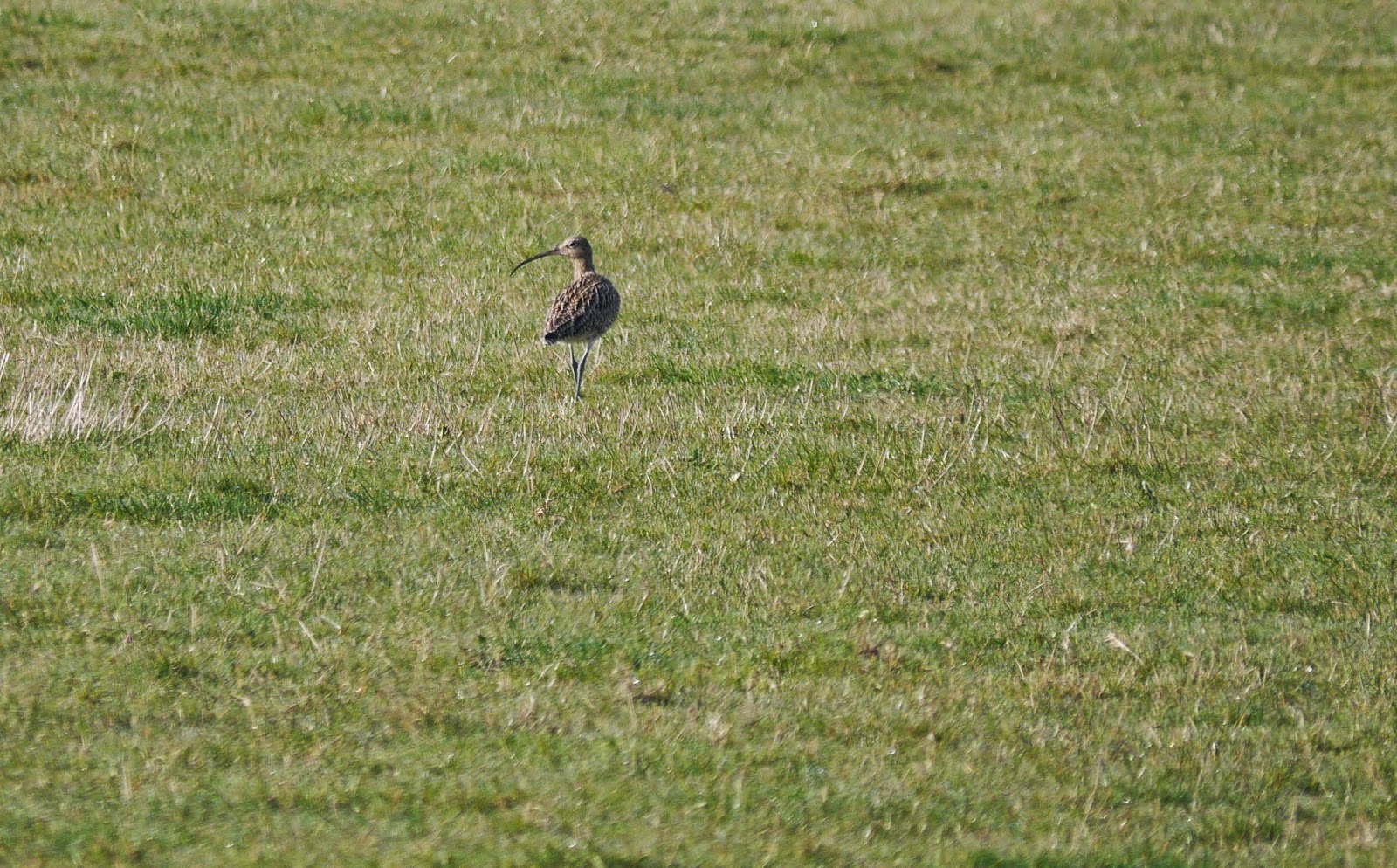 Not the best pictures, but they'll have to do. The birds above and below are a pair of Curlew that arrived in Charnwood Forest on Tuesday night/Wednesday morning. They're in a couple of fields, separated by a road, in which Curlew certainly bred last year, and probably for a few years before, and this might well be the very pair. I'll be keeping a watch on them (a couple of times a day where possible) for the rest of the breeding season.

Hearteningly, a couple more nearby fields had displaying Lapwings, with at least one pair apparently present in each. They were a bit more skittish, though, so I had to resort to subterfuge to get anywhere near them. 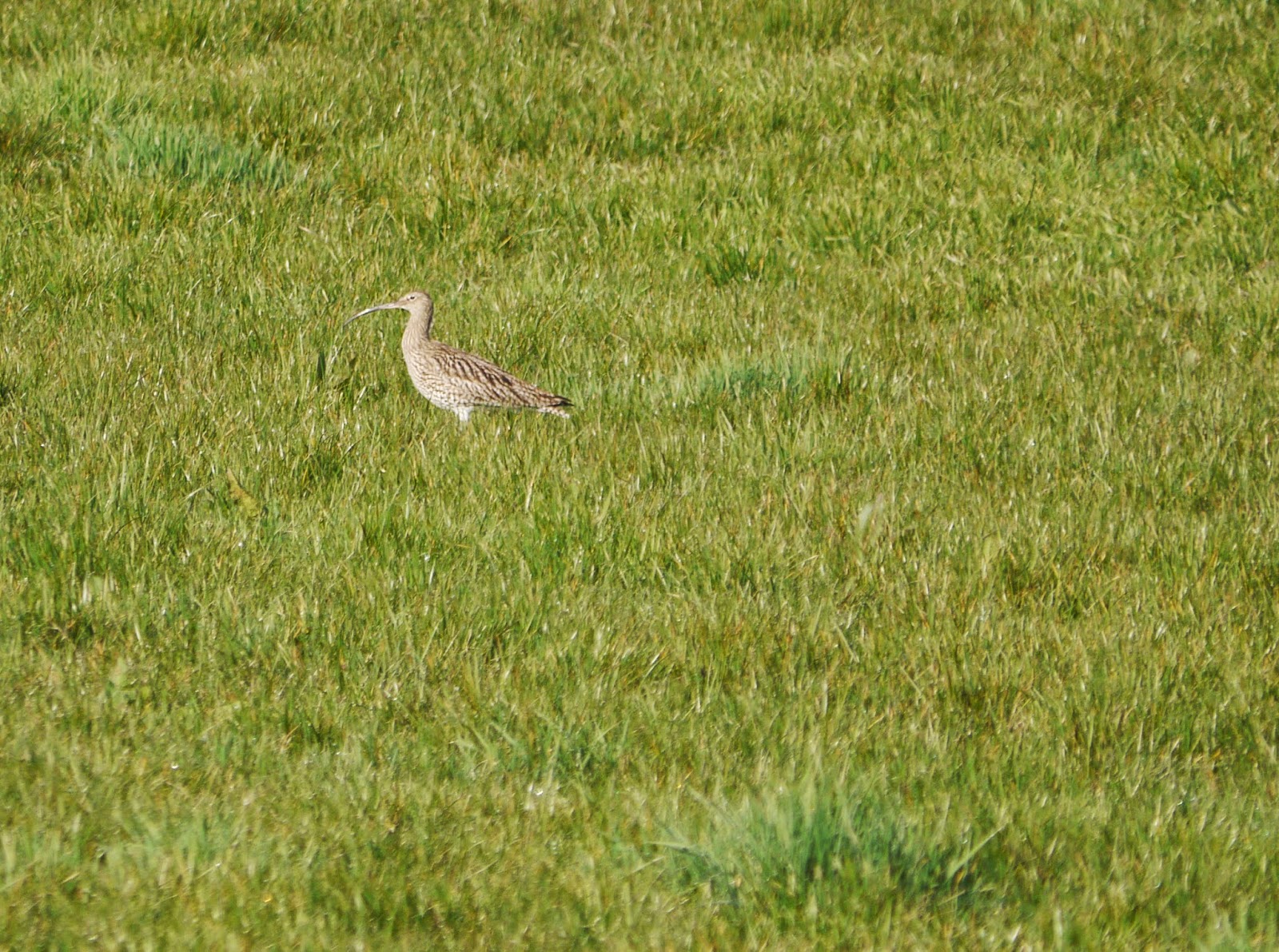 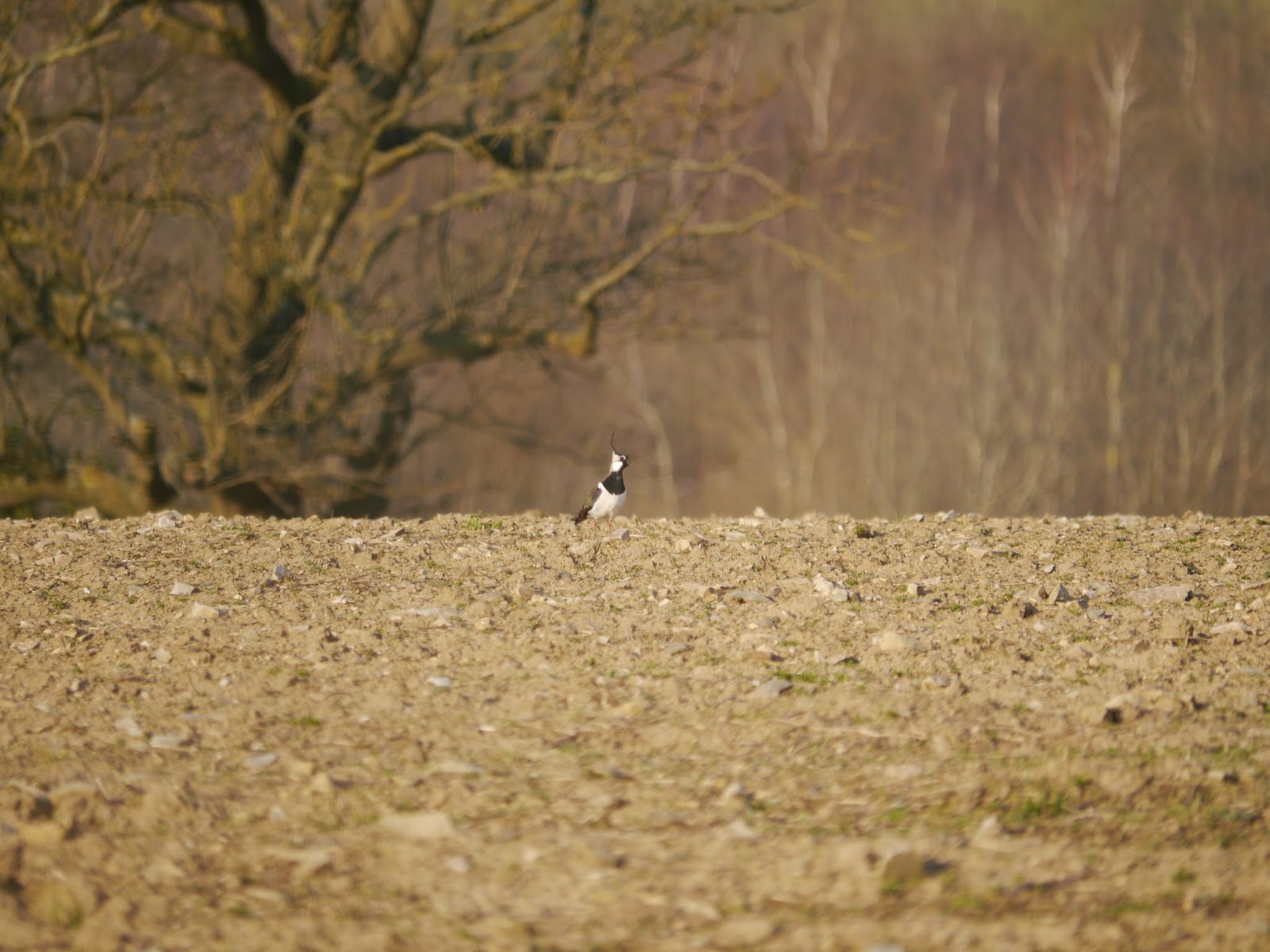 Posted by Matt Merritt at 14:16 No comments: 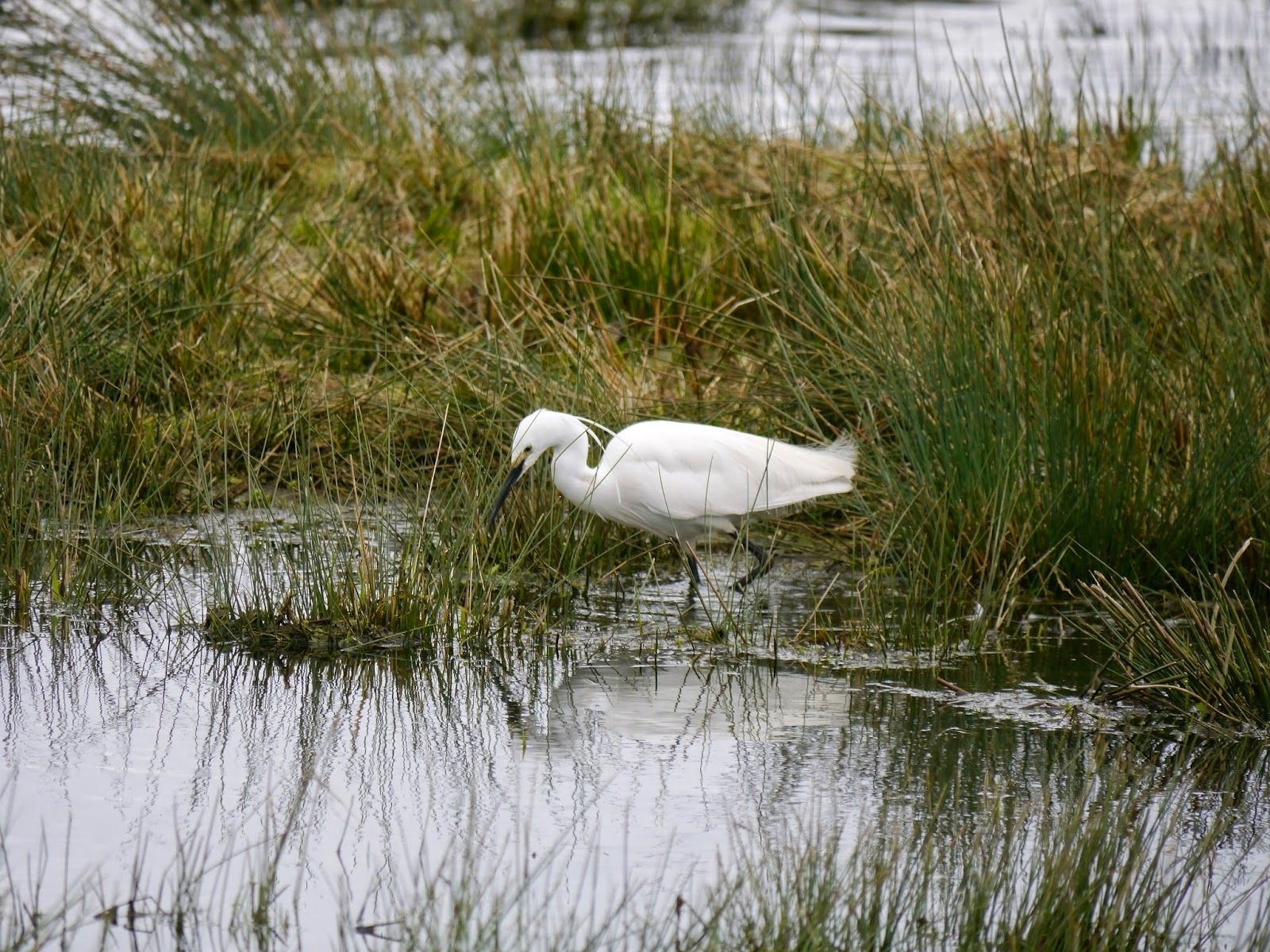 Odd to think that 30 years ago - less, even - the bird above, a Little Egret at Rutland Water, would have sparked a twitch of major proportions. Now, they're all over England and Wales, and fast spreading north into Scotland. Global warming? Perhaps it's helping, but in this case it's probably even more to do with the very adaptable nature of egrets.
Posted by Matt Merritt at 14:02 1 comment: 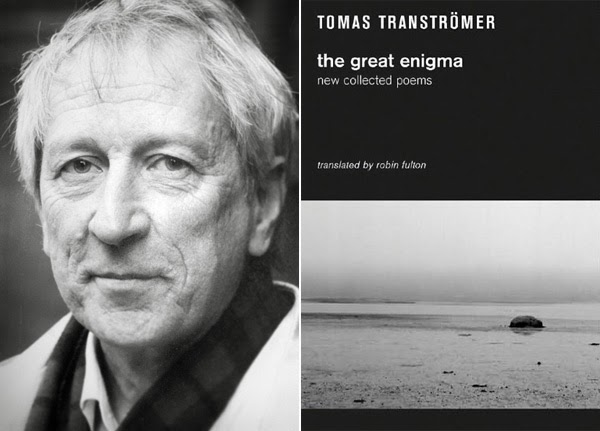 I was away from this blog when the death of Swedish poet Tomas Transtromer was announced recently - there's a good obituary of the Nobel Prize winner here.

I bought the volume above about 11 or 12 years ago, having come across a few of his poems in anthologies, and I'd say that it's since been one of my most-read poetry books, one that I go back to again and again. I'm back at it again now, in fact, having been reminded once again of just what a fine writer he was.
Posted by Matt Merritt at 10:23 No comments:

Out now - Sunspots, by Simon Barraclough

Simon Barraclough's new collection, Sunspots, is out now from Penned in the Margins. Keep watching this space for an interview with Simon, plus a full review of the book and a selection of poems from it. And this isn't a spoiler, but it's really very good.
Posted by Matt Merritt at 08:59 No comments:

Nice piece here about this year's Cheltenham Poetry Festival, including Nine Arches'  Jo Bell, the Poetry Society's Canals Laureate. Full details on the festival, which runs April 20-May 3, can be found here.
Posted by Matt Merritt at 08:25 No comments:

April will see the publication of two new collections from Nine Arches Press - Robert Peake's The Knowledge (out April 21st), and Jo Bell's Kith (out April 14th). Jo's second collection seems to have been a long time in coming, and I look forward to reading it very much. Robert's too - he's a fine poet and critic with a very distinctive slant on things, perhaps because of his transatlantic perspective.
Posted by Matt Merritt at 09:06 No comments:

Wayne Burrows will be launching his new Shoestring book - Black Glass: New and Selected Poems - alongside Carcanet poet Helen Tookey, at next week's Jazz and Poetry.

It all takes place at the Guitar Bar, Clumber Avenue, Nottingham NG5, from around 7.30, and as always there's jazz throughout the night from Four In The Bar, and emerging poets at 8.30. Entrance is free, but donations are encouraged.
Posted by Matt Merritt at 10:12 No comments: