I came across this rather intriguing article earlier today, and it started me thinking about the whole way that memory works. This phenomenon of large numbers of people vividly (and honestly) 'remembering' something that didn't happen seems remarkably common.

When I was a reporter on my local newspaper, back in the early 90s, I covered a story in which a metal detectorist from a nearby village was searching for the remains of a USAAF B-17 Flying Fortress, which he remembered crashing into a hillside late in the Second World War. Other than a couple of younger blokes, though, born long after the war, he had no support in the village. Everyone else (and at that time, of course, there'd still have been plenty of people who remembered 1944-45) insisted that the plane had flown over the village, in flames, then crashed much nearer Leicester.

The man turned out to be right. The plane was exactly where he'd said it would be, and it was excavated and taken away (the wreck had been bulldozed into the hillside at the time of the crash, once the bodies were removed).

But those people who'd argued with him sincerely believed what they said. Perhaps they did actually remember another plane altogether going over in flames, although there were no records of crashes near where they said there'd be. Who knows? But it does show that you really can't trust your own mind to tell you the truth.
Posted by Matt Merritt at 13:19 No comments: 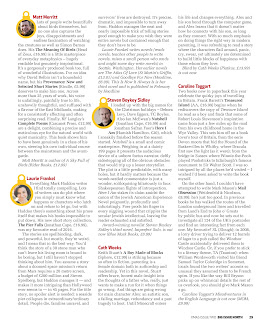 I was asked to pick a few books of the year for Big Issue North, and here they are – needless to say, it was a pretty hard decision picking my favourites, but I tried to include a bit of variety.
Posted by Matt Merritt at 08:12 No comments:

I have a vested interest, it's true, but if you're still looking to buy poetry presents for your loved ones and friends, then have a good look at the Nine Arches Press website.

There are single poetry collections, anthologies, the Primers series, and the 52: Write A Poem A Week book for those in need of inspiration. Oh, and the latest issue (no18) of Under The Radar, as well as subscriptions to the magazine.

That phrase, "loved ones", incidentally, always makes me think of a particular place. Loveden Hill, near Grantham in Lincolnshire, gets its name from it – it means "the hill of the loved ones". There was a huge, early Anglo-Saxon cemetery there, and the spot retained its importance throughout the Dark Ages, being the centre of one of the wapentakes of Kesteven (itself one of the ancient divisions of Lincolnshire).
Posted by Matt Merritt at 09:12 No comments:

The best Christmas songs ever

Come on then, what are they? I saw half an hour of a programme last night in which they were doing a rundown of the 100 best Christmas songs ever, and it set me thinking.

In no particular order, here's a few of my favourites...

2000 Miles – The Pretenders
It's not actually that Christmassy, but it's great, despite the rather bizarre video (which featured on the programme)

Fairytale Of New York – The Pogues and Kirsty McColl
Hardly original, I know, but I still love it, even if these days I have to make sure that I don't hear it too often.

Christmas Must Be Tonight – The Band
Never gets played (but then The Band rarely get played in the UK), but it's a typically richly textured track with lyrics from the viewpoint of a shepherd at Jesus's birth.

Sweet Bells – Kate Rusby
Wonderful. That voice. Nothing else to say.

Long Way Around The Sea – Low
Credible lo-fi indie Christmas song? Yep. This is it, from a rather lovely mini-album of festive tunes.

In Dulci Jubilo – Mike Oldfield
I've always had a soft spot for this, even if the rest of the time I'd avoid Oldfield like the plague. Oh, except Hergest Ridge. That's endearingly strange.

I Believe In Father Christmas – Greg Lake
Sadly, Lake died just a few days ago. A song complaining about the commercialisation of Christmas (slightly odd way to do so), it's become a festive staple.
Posted by Matt Merritt at 11:50 No comments:

Shauna Robertson of Town Hall Poets writes here about Candlestick Press's pamphlets, which make absolutely ideal Christmas presents for the poetically-inclined person in your life (they suggest sending one instead of a card). They include Ten Poems About Cricket, which features my poem Two Orthodox Left-Armers, but there are an awful lot of others available if Wilfrid Rhodes and Hedley Verity really don't tickle your fancy.
Posted by Matt Merritt at 15:15 No comments:

Mark Avery's Books of the Year

Mark Avery, writer, conservationist and one of the most influential environmental bloggers in the country, posted his round-up of books of the year, and I'm delighted that A Sky Full Of Birds was one of them. You can also read his original review of it here.

Of the other books featured, favourites for me were Chris Packham's Fingers in the Sparkle Jar, David Lack's The Life of the Robin, and Stephen Moss's Wild Kingdom, although there are also a few on there that I'm looking forward to getting round to reading.

Britain's Birds is a pretty extraordinary book, too – it might not replace the trusty Collins Bird Guide as every birder's must-have, but it's a pretty essential companion to it, given the sheer range of ID photos it packs into its pages.

Finally, the Melissa Harrison-edited seasonal anthologies (with proceeds going to the very worthy cause of the Wildlife Trusts) are great to, although I will admit to a vested interest, as I have a poem in the Autumn anthology.
Posted by Matt Merritt at 10:02 2 comments:

It's the time of end of year round-ups, and here, from The Guardian, is Kate Kellaway's choice of poetry books of 2016. I've only read a couple of them - the Denise Riley book and Alison Brackenbury's collection, and can recommend them both without reservation. Very different poets, but both equally deserving of a place in any end-of-year summary.
Posted by Matt Merritt at 16:51 No comments:

Over at Rogue Strands, Matthew Stewart has supplied a rundown on his favourite poetry blogs of the year, and has very kindly included Polyolbion in it. I'm very grateful, although can't help feeling that I need to work a bit harder to earn that accolade.

I'm not going to disagree with any of his recommendations – there are lots of superb blogs there to browse through, so go for it. In the meantime, I'm finally getting round to reading some new poetry (rather than back catalogue stuff), so I might actually be able to come up with some end of year recommendations myself.
Posted by Matt Merritt at 09:56 No comments: