Back from the bush 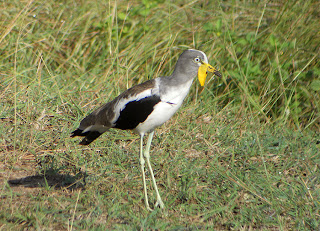 I've just got back from a trip to South Africa for Bird Watching magazine - I hesitate to call it work, because it's really a privilege to get to see far-flung parts of the world and then write about them. It would have been hugely enjoyable anyway, given the wealth of birdlife we saw, but big bonuses were loads of mammals (including a very close range Leopard), and great travelling companions (of whom more in a later post). We were expertly guided, too, by Leon Marais of Lawsons Safaris, who patiently and unfailingly picked out target bird after target bird.

We flew into Jo'burg then straight back out to Nelspruit, and after a stop at the Blyde River Canyon headed into the Kruger National Park for three days. We then flew out from Nelspruit to Durban, drove up the KwaZulu-Natal coast for stops at Eshowe and St Lucia, before heading back to Jo'burg and home.

Over the next few weeks I'll post some of the highlights of the trip in a chronological fashion, but for now, here's a few of the star birds (all from the Kruger). They were all digibinned using a Nikon Coolpix S300 and Swarovski 8.5x42 ELs - it's all a bit hit or miss, but some came out pretty well.

At the top of this post is a White-crowned Lapwing - just look at those extraordinary spurs on its wings. 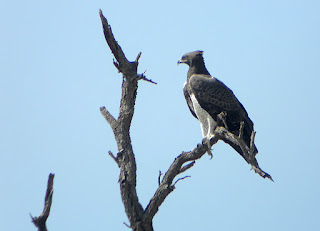 This is a Martial Eagle - we got about as close to it as I've ever been to any eagle. 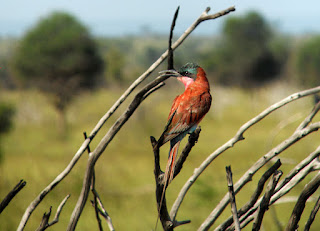 And this is one of the hundreds of Carmine Bee-eaters we saw in the Kruger. Not that I got tired of them - I think Bee-eaters might be becoming my favourite bird family of all. 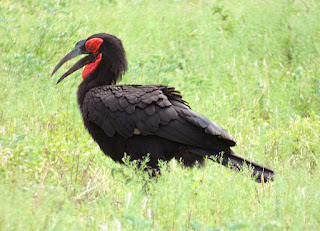 Southern Ground Hornbill is one of those birds that needs to be seen to be believed - we came across a little group feeding in a scrubby corner of the park. 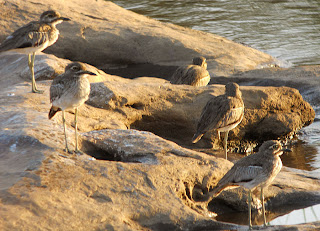 And finally, a little group of Water Dikkops (or Thick-knees, as they're now properly called) - these were a familiar sight, but I always like seeing anything from the Stone-curlew family.

I mentioned the launch of Crystal Clear Creators first six poetry pamphlets last week - you can find out more about them here. I've read enough by three of the poets involved - Roy Marshall, Aly Stoneman and Charles Lauder Jr - to be looking forward to their chapbooks a lot, but it'll be good to read some new voices too. Oh, and the covers look terrific.
Posted by Matt Merritt at 09:44 No comments:

Someone tweeted yesterday about the programme for De Montfort University's annual Cultural Exchanges festival. I'll admit I'd forgotten all about it, but booking has only just opened for most of the events, I think, so there's still plenty of time.

I'm going to get along to the reading by Alan Halsey and Geraldine Monk on March 1, and I'd also like to be at the Crystal Clear Creators reading the following day. That might depend on work, though, and it also clashes with the launch of Milorad Krystanovich's posthumous collection in Birmingham. But the Crystal Clear event features a lot of fine poets - Jessica Mayhew, Andrew 'Mulletproof' Graves, Roy Marshall, Hannah Stevens, Charles Lauder Jr and Aly Stoneman - and it's also free (as is the Halsey/Monk event). Decisions, decisions.

Finally, I just noticed that on February 28, the festival also features Hugh McIlvanney in conversation. This one's £4, but that's a pittance to see the best British sportswriter since the Second World War (at the very least).
Posted by Matt Merritt at 10:06 No comments:

Is there a point to reviewing poetry?

Interesting blog post here, by Helena Nelson, about poetry reviews. Given poetry's current low profile, both in society as a whole and the arts world, I find it hard not to subscribe to the "any publicity is good publicity" school of thought. But I also enjoy reading reviews as pieces of writing in themselves, and as Nell says, reviewing is a skill that could do with some nurturing.

Interesting, too, that she gets far fewer female than male volunteers to review for Sphinx - drop Nell a line at nell@happenstancepress.com if you'd like to try to redress that imbalance.
Posted by Matt Merritt at 14:24 No comments:

I previously knew Nasty Little Press solely through having reviewed one of their chapbooks - Martin Figura's Boring The Arse Off Young People - for Sphinx. But they also publish ultra-compact pamphlets to give readers a taste of their poets, or to introduce new writers.

Now, Lizzy Dening, the young poet who's the subject of Nasty Little Intro #2, isn't, strictly speaking, a new writer where I'm concerned. I've heard her read in Cambridge, and also come across her poems in magazines. I won't try to review the pamphlet as such, because I'd probably end up giving too much away, and at £2 there's really no reason not to try it for yourself, but all five poems are taut, quietly surprising, and hugely promising.

Nasty Little Press describe it, and their other mini-selections, as the perfect accompaniment to a train journey, or a long, hot bath. I won't argue with that.

Posted by Matt Merritt at 10:21 No comments:

It's always nice to welcome a new literary magazine or webzine on to the scene, especially when it's one based in the Midlands (sorry, let my regionalism get the better of me there). Jane Holland's behind Epicentre Magazine, and I like the fact that she's planning to run it with rolling updates, rather than on an issue-by-issue basis. As she points out, that's what Stride has been doing for years, and doing very well - it's certainly the webzine that I read most regularly.

If you look down my sidebar, you'll also see a button that links to the excellent Talking Naturally website. Charlie Moores is the man behind it, and the podcasts and 'Conference Calls' in particular are highly recommended.

Posted by Matt Merritt at 09:33 No comments: