Out There With The Birds

I've got a post up at Out There With the Birds, the blog of Bird Watcher's Digest in the USA, and there'll be more to follow (roughly once a month). There's also, as you'll see, a wealth of material from all over the world (always good to see Merritt Island getting a mention).

My posts are going to concentrate on the crossover between birdwatching and poetry, and although I've got a fair few ideas lined up, I'd be interested to hear of any unfairly overlooked bird poems that might be worth writing about.

In the meantime, go out and find a roding Woodcock, if you can - you won't regret it.
Posted by Matt Merritt at 13:13 No comments:

Labels: Birds, Out There With The Birds, Poetry

I was down in London yesterday, mainly to visit the Geological Society in connection with a poem for an anthology project from Worple Press. It's to commemorate the 200th anniversary of the creation of William Smith's geological map of the country, and I was able to see the map itself. Seen full-size, on the wall of the Society's offices in Piccadilly, it's really an imposing and impressive piece of work. It was great to meet and have a drink with Michael McKimm, who as well as being a very fine poet, works at the Society and is co-ordinating the project.

I also managed to fit in a visit to the Viking exhibition at the British Museum, a bit of research for another literary project (of which more very soon), and some book-buying - Karen Solie's Selected Poems, Hugo Williams' I Knew The Bride, and Christopher Isherwood's The Condors and the Cows. I also couldn't help noticing, in Foyle's, two copies of The Elephant Tests. You'll have to forgive my delight at finding one of my collections in a London bookshop for the first time - it was nice to be sandwiched between WS Merwin and Hilary Menos.

I ended a great day by catching up with an old university friend for a quick drink before the train. It had been far, far too long.
Posted by Matt Merritt at 16:41 No comments: 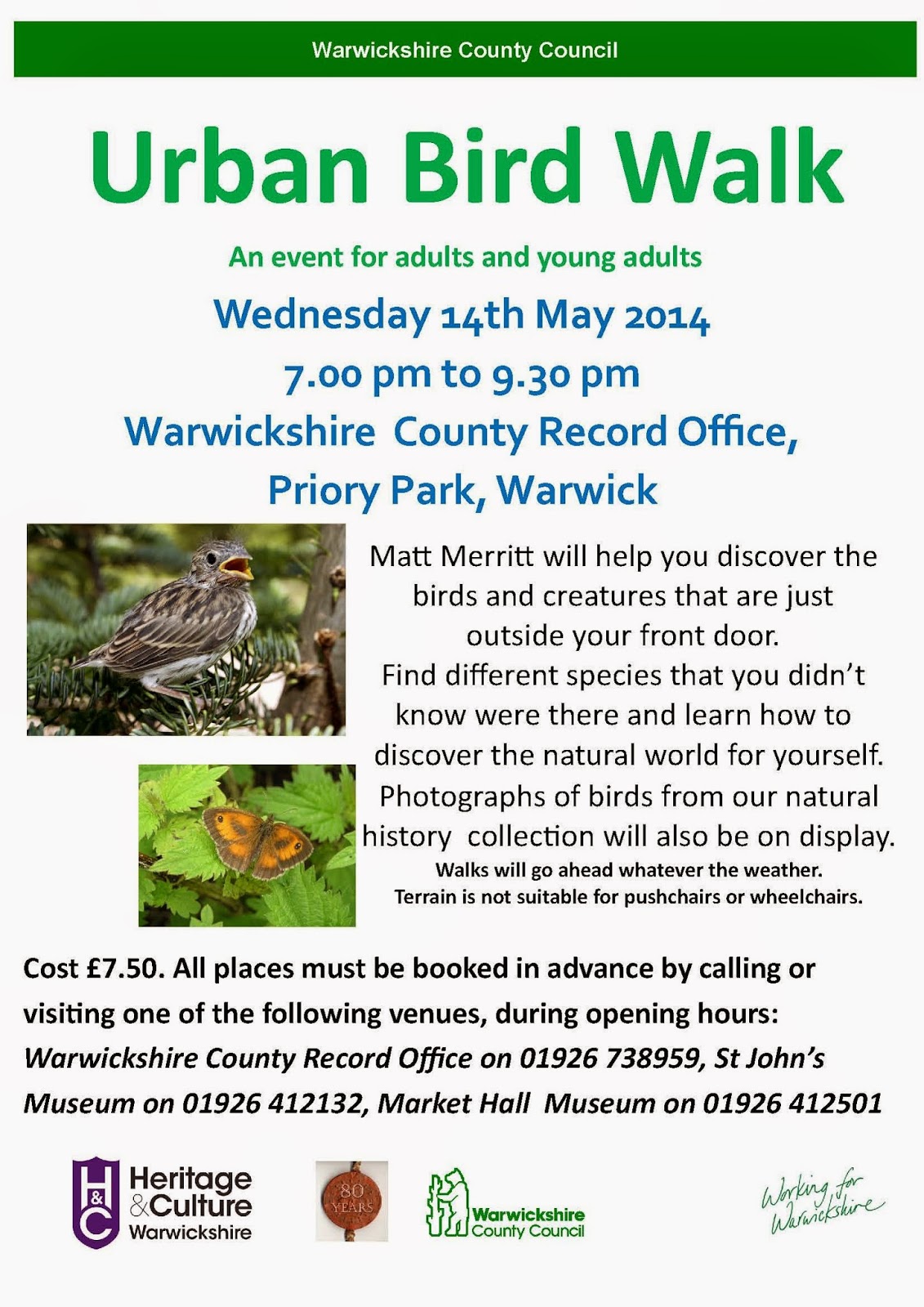 Posted by Matt Merritt at 16:24 No comments:

I'm guessing that by the time I get home tonight, the Swifts that nest on the houses further along my terrace will be back. There was no sign this morning, but I did see Swifts locally last night, so they can't be far behind.

It's earlier than the last couple of years, when they've arrived on May 10th and 11th, but still considerably later than what used to be their regular arrival dates, April 27th and 28th. Of course, there's probably not too much significance in that - these are probably different Swifts (albeit perhaps descendants of the originals), who spend their winters in a different location.

Most of my birding time over the weekend was spent watching a couple of locally rare breeding birds, of which I can't say more, but down at Kelham Bridge, I did see the resident Buzzards hunting by hovering in the stiff breeze. Now there's nothing especially unusual in that - Buzzards often do it - but they do usually look rather clumsy, giving the impression of someone treading water, rather than the perfectly-still mid-air poise of the Kestrel.

This pair, though, have it down to a fine art, and I've never seen Buzzards hover so well or so repeatedly. They were successful, too, coming up with prey (voles, from what I could see), on several occasions in the space of half an hour. In the end, the resident male Kestrel came and joined them, and was similarly effective. Probably not a good time to be a rodent at Kelham Bridge.
Posted by Matt Merritt at 12:06 No comments:

Now might be a good time to mention that you can still sign up at 52, a blog that encourages writers to write a poem each week, inspired by 52 different prompts. Many of these come from Jo Bell, who runs the blog, but there have also been a number of guest poets, including David Morley and, for the last week, myself.

I was truly staggered by the enthusiasm of the response to my own prompt, by the quality of the poems that resulted, and by the willingness of the participants to offer constructive criticism to their fellows. A number of poets produced several excellent pieces of work, and several more who said they'd found the prompt difficult managed to come up with some superb work, proof perhaps that the best poetry has to involve a little bit of pain in the writing process. There are a number of much-published poets on there, as well as beginners and everything in-between.

So, if you fancy giving it a go, take a close look - you can always catch up on the older prompts as you go along. There's a closed Facebook group linked to it, which you're invited to once you join.
Posted by Matt Merritt at 12:27 No comments: