Good piece by Todd Swift over at Eyewear, talking about the usual glut of year-end book lists. I tend to agree with a lot of what Todd's saying, although it is fair to point out once again that I'm always a bit underwhelmed by Don Paterson. I bought Rain the other day, along with John Burnside's The Hunt In The Forest, and although I will take time to digest and re-read them, I'd have to say I prefer the latter. As usual with Paterson, I find myself thinking "it's good, but is it really that good?"

Meanwhile, Peony Moon is featuring mini-lists from a wide variety of poets. They make very interesting reading, and it's good to see Andrew Philip's wonderful The Ambulance Box and Clare Crowther's The Clockwork Gift cropping up with such regularity. I found it very difficult to narrow things down to three books, because I get the impression it's been a pretty strong year.

With that in mind, I'll be doing my usual round-up of favourite books some time after December 25th, but in the meantime, look out later this week for reviews of Simon Armitage and Tim Dee's anthology The Poetry Of Birds, and the similarly themed US anthology Bright Wings, edited by Billy Collins.

Current reading includes John James' Collected Poems, George Ttoouli's splendid Static Exile, and a selection from Francis Kilvert's diaries (I'd been looking for a cheap paperback of the latter for ages, and found one for £2 in Leicester on Friday).
Posted by Matt Merritt at 13:33 4 comments:

At the end of next week, I'm off to Oxford for the Birds, Culture and Conservation Symposium, which will look at ways of encouraging people into supporting conservation projects using the arts.

It will feature writers and poets such as Mark Cocker, Jeremy Mynott, Dominic Couzens and Helen Macdonald, plus visual artists, academics and more. I'm going to be there both in a work capacity and out of personal interest, and over the next couple of weeks, the blog I've linked to will include material on the subjects up for discussion.
Posted by Matt Merritt at 10:04 No comments:

Still need a Christmas present for the (male) birdwatcher in your life? These should do the trick nicely!
Posted by Matt Merritt at 13:28 No comments:

Interesting article about birdwatching in The Observer, here, and nice to see my boss, Bird Watching editor Sheena Harvey, quoted. One of our columnists, David Lindo, makes some interesting comments, too, and another of our regular contributors, the tireless Ian Barthorpe, of Minsmere RSPB, gets a mention, too.

I'm not sure I agree with Tim Dee's comments, though, about men in particular being drawn to the hobby "as a way of organising the world". I daresay there is some of that, particularly from the more obsessive listers, but even for most of them, I would have thought, one of birdwatching's great appeals is quite the opposite - it's something we can't control, a reminder of the randomness and variousness of the world.
Posted by Matt Merritt at 11:41 No comments:

Last night, it was straight down the A46 to Royal Leamington Spa for the launch of David Morley's The Night Of The Day, from Nine Arches Press.
A couple of hecklers, one of them particularly persistent and totally irrational, could have spoiled things, but David was unshaken and gave a very energetic, celebratory reading that was an absolute pleasure to hear. There was excellent support from Myra Connell, Matt Nunn, George Ttoouli and Simon Turner, too, and some good open mic-ers. I bought copies of David's pamphlet (a limited edition version, in fact) and of George's new collection, Static Exile (from Penned In The Margins), and both made me think about how much better poetry books look these days, even before you get to the contents. I feel a long blog post coming on, but it will have to wait until another day.
Today, the new issue of Sphinx arrived, and a real cracker it is too. So far I've only had chance to read the interview with Tony Frazer of Shearsman, which is worth the cover price alone. Shearsman have being going from strength to strength these last few years, and there are quite a few of their books that I'd number among those volumes I always like to have to hand, so it's great to hear just how Tony has managed such a prolific, and high quality, output.
Also today, a woodcock flushed almost from beneath my feet in Cademan Woods, another flying across the road at Copt Oak, and owls, owls, owls at Cossington.
Posted by Matt Merritt at 21:06 No comments:

Sad news that Edward Woodward has died, aged 79. I'd guess that, in the UK at least, all the talk will be of Callan, The Wicker Man and The Equaliser, but here he's pictured in what, for my money, was his finest moment, Breaker Morant.
It's a great film, with Woodward in the title role well supported by the likes of Bryan Brown, and it's more relevant now than it's ever been, I'd have thought. Woodward is superb throughout, although my favourite scene is the one where some of the guards are offering him and his co-defendants a chance to escape. One tells him that he could take a horse, ride to Portuguese East Africa. Morant asks what he'd do then. "Get on a ship. See the world," comes the reply.
"I've seen it," says Morant, and Woodward's delivery of the line wrings maximum value out of three small words.
Posted by Matt Merritt at 13:32 4 comments:

Despite the howling gales and the rain bucketing down (I found myself having a Cardiff flashback there and wanting to say tamping down, which sounds so much better), and despite both my headlight bulbs giving up the ghost during the course of the day, necessitating a last-minute dash to Halford's, last night's reading at Leicester Poetry Society was a success.
A good roomful (including HappenStancers DA Prince and Marilyn Ricci) had braved the storm, and a very attentive audience they were too.
We read in alphabetical order, which meant I went first. Always a good thing. It's not so much that I get nervous, but more for the same reason that I prefer to open the batting when playing cricket. If I've got too much time to think about the 7ft fast bowler/untested new poem (delete as appropriate), I get very tempted to start completely overhauling my technique/rewriting things on the hoof. Far better to get in there straight away and face the (chin) music.
It also means I enjoy the other poets' work more. Pam Thompson and Lydia Towsey were both excellent (I swapped books with Pam at the interval - her pamphlet Hologram has a fantastic hologram of David Bowie on the front) - confident and assured but in contrasting styles. I particularly enjoyed Lydia's snail poem and Pam's canal poems, but there was an awful lot to like.
Books were bought, sold and swapped, and a thoroughly good time was had by all. Oh, and my set-list was:
The Memory Of Water
Unquiet
Hutt River Province
The sea at Ashby de la Zouch
Knots
The Meeting Place
The American Version
Uchronie
Midstream
Whinchats
Under Cotopaxi
Worst Case Scenario
Happiness
Troy Town
Lullaby
Posted by Matt Merritt at 22:15 2 comments:

It's a Leicester Poetry Society event, so come along and support poetry in the East Midlands. Books will be on sale. Hope to see you there...
Posted by Matt Merritt at 16:36 2 comments: 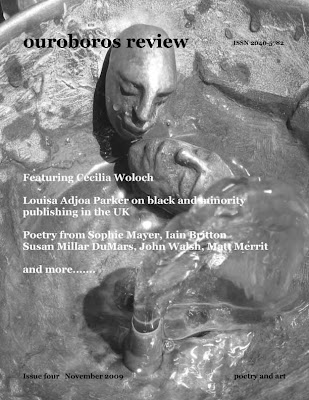 The new issue (No.4) of Ouroboros Review is now live, and can be read in its entirety here. As always, it looks really wonderful, so you can buy a print version here if you want to actually get your hands on it or keep it for posterity.

There's plenty of excellent poetry in there (so far I've particularly enjoyed some of the work by John Walsh and Sophie Mayer), plus a good piece by Louisa Adjoa Parker on black and minority publishing in the UK, among other prose pieces.

I've got three poems - Corvo, Gossamer and Jubilee - in there. Hope you enjoy it all.

EDIT: I've had a proper look through now, and there's all sorts of good things in there. I really enjoyed the poems from Arlene Ang and Michelle McGrane, but there's plenty of other great stuff.
Posted by Matt Merritt at 13:38 1 comment:

Buy one, get one free!

Christmas is coming, and, err, I’m getting fat. With that in mind, and before doing anything silly like eating less or exercising more. I’m trying to create more room in my cramped house my rationalising my bookshelves.

A while ago, I bought some books at the closing down of a bargain bookstore. They’d always sold a lot of remaindered poetry from the likes of Faber, Cape, Picador and Bloodaxe, and there were quite a few volumes worth having, but you basically had to buy a box at a time, for a fiver. So I did. Trouble is, there were also quite a few books in there that I already had, and a few more that I didn’t really want.

So, until Christmas, anyone buying a copy of Troy Town through this website (£9, including postage and packing) can also have one of the collections absolutely free - I'd like to think they were going to a good, poetry-reading home. I’ll send you the full list of what’s available when you enquire, but some of the poets include Don Paterson, Neil Rollinson, Jean Sprackland and Ruth Padel.

Email me at the link shown on the right, or just post a comment below. Oh, and don't worry if it takes me a while to get back to you - I'm going to be all over the place for the next couple of weeks.
Posted by Matt Merritt at 14:04 1 comment:

Currently distracting me from work...

I've kept going back to this poem by Sharlene Teo, at Gists and Piths, in the course of this week. Very intriguing, very enjoyable.
Posted by Matt Merritt at 15:19 No comments:

It's a Leicester Poetry Society event, so if you can, come along and support poetry in the East Midlands. If you're a regular reader here, you know more than enough about me, but here's a bit more background on my fellow readers...

Pam Thompson has been writing and performing poetry in the East Midlands for a number of years. She is part of the steering-group of and was artistic producer of the Lyric Lounge week at The Y Theatre, Leicester, in July 2009. Pam is widely published in magazines and pamphlets. Her first full collection is The Japan Quiz, published by Redbeck Press in 2008

Lydia Towsey comperes and coordinates WORD! and in 2009 has been the Artistic Director of The Lyric Lounge (www.lyriclounge.co.uk). She has performed alongside John Hegley and Jean 'Binta' Breeze and is soon to be published in POM, an anthology of new voices, co-edited by Michael Horovitz, John Hegley and Melanie Abrahams.

Books will, of course, be on sale. Hope to see you there...
Posted by Matt Merritt at 13:08 No comments: