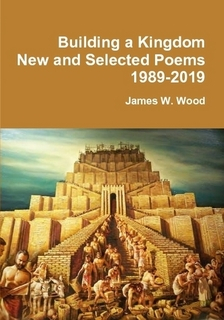 Recent posts on this blog have, unfortunately, largely been concerned with the sad passing of poets and musicians, so it's good to have something positive to write about, namely James W Wood's Building A Kingdom: New and Selected Poems, from The High Window Press.

I was honoured and delighted to be asked to write the introduction for it, and I will post a few choice quotes from it over the next few days, but for now I'll leave you with Irish poet Noel Duffy's words about it, and an exhortation to get hold of a copy as soon as you can.

"There is a fierce sense of purpose in the poetry of James W Wood, revealing a writer with a uniquely powerful and, at times, bleak vision of modern life. Yet placed against such concerns are poems of a more intimate nature, rooted in the world with a thrilling sensuality."
Posted by Matt Merritt at 08:00 No comments:

Very sad to hear of the death of the poet, playwright and translator Elaine Feinstein. I hadn't realised previously that she actually grew up in my home town of Leicester (I knew she had a connection to the city, but for some reason thought that she'd been to university there).

Her fairly recent New and Selected Poems, from Carcanet, is probably the best place to start if you want to read her work (and I can recommend it very highly). Here's a poem of hers that I like a lot – I can't remember where I first came across it, but it's stayed with me, and feels more and more apt the older I get.
Posted by Matt Merritt at 09:46 No comments:

Sad news overnight of another death, that of US lo-fi indie icon Daniel Johnston, who suffered a heart attack at his home in Austin, Texas.

I first came across him back in 1996. Stewart Lee, the comedian, in his other guise as a record reviewer for the Sunday Times, raved about the double album Genius + Love = Yo La Tengo, a collection of out-takes, alternative versions, covers and other assorted oddities.

Although in truth it's fairly patchy (as such records always are) it started my long love affair with Yo La Tengo, and in no time at all I was working my way through their back catalogue. One of the tracks that did catch my attention was a cover version of Daniel Johnston's Speeding Motorcycle, being performed live on a radio show (YLT had already covered it on their album Fakebook). Johnston himself phones in and provides the vocals. Like everything else Johnston did, it's very rough-edged, but also full of passion and feeling.


I gradually collected a few of Johnston's earlier records, and found a lot there in the same vein. His music's always very affecting, although sometimes that's in the sense of being disturbing. It's always worth listening to, though – it's no wonder his songs have been much covered by other artists.