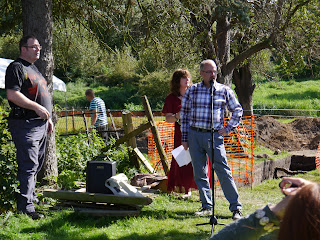 On Saturday, I was over at Polesworth again for the Heritage Open Day at the Abbey, the culmination of this summer's archaeological dig there. As it was also carnival day in Polesworth (postponed from earlier in the summer) and gloriously sunny and hot, a good time was had by all.

As well as those of us who had led workshops as part of the project - David Calcutt, Jo Bell, Jacqui Rowe, Jenny Hope and Maeve Clarke - many of the participants read the work that they'd produced as a result of them, too. In fact, a couple of the archaeologists got in on the act to good effect, and there were songs, too.

There were displays of the poetry, the archaeological finds, and by medieval re-enactors, and it's also just a lovely old church, full of history.

The man who made it all happen can be seen above. Mal Dewhirst's tireless work has already put Polesworth firmly on the poetry map (or back on it, rather, given its connections to Drayton, Shakespeare and Donne), but this was something else. What's really impressive is the feeling of sheer enthusiasm you get from the townspeople - there's a real sense that the project (and those that have gone before, such as the Poetry Trails) has made a lasting impression. Walk around for five minutes and you're confronted with poetry everywhere, as a living, vital force that engages with both contemporary life and history.

It was great, then, that Mal had just been appointed Staffordshire's new Poet Laureate (Polesworth is just across the border in Warwickshire, but it's possible to drive through four counties in 400 yards in these parts). I know he'll bring the same drive and innovation to it that he has to his other projects, so watch this space for more news.

A couple more pictures to finish - Gary Longden and Jacqui Rowe reading in front of the dig. 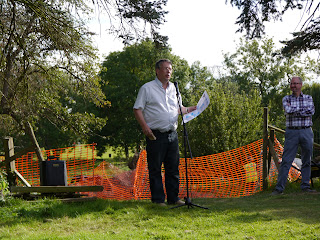 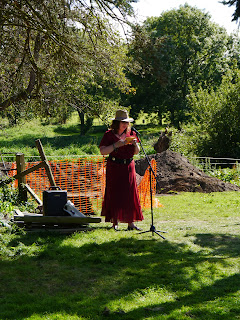