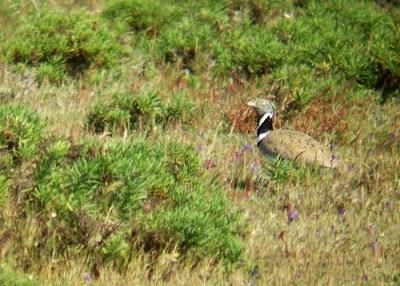 While in Portugal last week, I spent a day birding around Cape St Vincent, right at the south-west extremity of the country (and the continent, I suppose), with the expert help of German tour guide and Algarve resident Georg Schreier. We'd already seen a couple of Little Bustards (OK, OK, no sniggering at the back there) at a fair distance, when the one above popped up not far from the track we were driving along.

He's a male, so he was spending all his time ruffling up his neck feathers and making a strange 'prrrt' noise, a bit like someone trying to blow a raspberry but failing miserably. As we paused there watching him, I thought I'd try to digi-bin him (ie. take photos using a compact camera held up to the eyepiece of my binoculars, which were resting on the door of the car). I was never going to manage anything of any great quality, because I have little experience of the technique, and because it was so windy that the car was shaking like crazy. Still, I did get a few record shots, such as the one shown, with a Fuji F31d and a pair of Bushnell Elite 8x43s.

Georg, meanwhile, digi-scoped (same technique, but using a telescope) the much better picture below, despite also having to rest his scope on the car door. 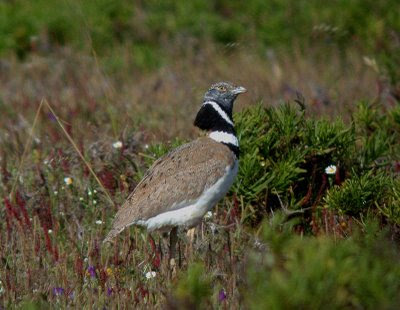 Great photos, and fascinating to learn about your respective photographic techniques: all new to me. Do we know when/whether the bustards realeased on Salisbury Plain will breed this year yet?

Thanks Caroline. I think the Salisbury Plain Great Bustards are doing OK, although as is usually the way with these things it all starts very slowly. We keep getting reports of some in Somerset in the winter, so there's a good chance that they will start to spread for breeding too.

It would be great if it could be as successful as the Red Kite schemes, but I suspect it will take a lot longer.