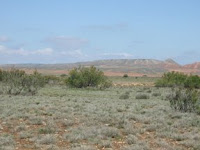 Just back from a week in Aragon on a 'fam' trip - birding, eating too much, and drinking lots of splendid wine. I won't even attempt to call it work, because it really was a lot of fun with a great group of people.

One of the things that really struck me was just how huge and empty the landscape is - it's something that takes you completely by surprise in western Europe. Given that around half of Aragon's 1.2 million population lives in the capital, Zaragoza, that probably shouldn't be a shock, but it is. Standing out on the steppes (above left), you can imagine yourself in the middle of the American South West. 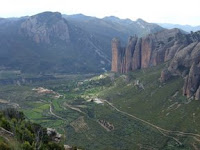 Highlights included seeing several glorious Lammergeiers, a Golden Eagle on the nest feeding young, more Griffon Vultures than I could even have imagined, a very showy Rock Thrush in the spectacular setting of Castillo Loarre, a displaying Little Bustard out on the steppes, the maddeningly elusive Dupont's Larks, and both Black and Black-eared Wheatears (one of the latter subjecting a male Cuckoo to the most fierce mobbing I've ever seen from a small bird). And then there were Bee-eaters and Hoopoes galore, Alpine Swifts chattering overhead, and a whole host of great warblers, including Subalpine, Dartford, Sardinian, the not-very-aptly named Melodious, and the lovely Bonelli's (basically the southern equivalent of our Wood Warbler). 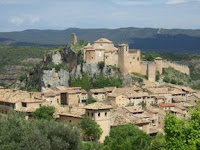 I shouldn't forget the Nightingales. Other than on the steppes, they were everywhere we went, and when we stayed a couple of nights in the mountaintop village of Alquezar (pictured right), you could hear them singing throughout the night (luckily, we were far too shattered to be kept awake by it). In fact, the local name for them is Ruisenor, meaning 'noisy man', which hits the nail right on the head.

I had intended to do a lot of reading, but spent most of my travelling time sleeping, so I still have quite a bit to catch up on. But anyway, here's a picture of our tired but happy group to close with... 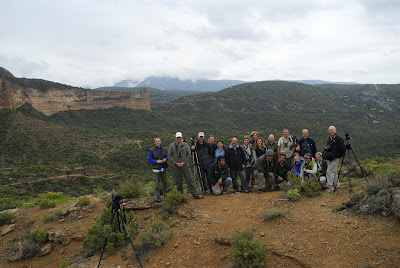 PS. As you'll see, the rain in Spain doesn't fall mainly on the plain at all.
Posted by Matt Merritt at 15:43