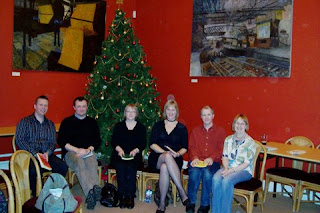 On Friday, I hot-footed it north to Carlisle for a reading, alongside five other HappenStance poets, as part of the Border Poets series.
I usually like to see a bit of the countryside on such jaunts, but it rained all the way up to Scotch Corner, and across the Stainmore Pass to Penrith, putting paid to my plan to do a bit of birding and stop off at the spot where semi-legendary Viking king of York Eric Bloodaxe (see the poetry connection?) was finally brought to bay.
We had one or two problems finding each other once we got there (and two or three excellent pints of Black Sheep), but were at the Tullie House Museum and Art Gallery in good time to appreciate what really is a lovely venue. And what followed was without doubt the best reading I’ve been involved with.
There was a good-sized audience, who were appreciative, knowledgeable and gratifyingly willing to part with their money for chapbooks (we were pretty much sold out by the end of the night). The variety of poets on show seemed to work particularly well, offering plenty of light and shade and both obvious and more subtle similarities (three of us, quite unintentionally, read poems with Robinson Crusoe connections).
Eleanor Livingstone, who launched her chapbook at the same event as me two years ago, read well from her excellent The Last King Of Fife. The title poem, in particular, is a favourite of mine, but she’s a very sure-footed poet, in an understated way, so there was plenty else to enjoy.
I’d only just met James Wood, but have been enjoying his The Theory Of Everything since it came out. He reads very well, with an engagingly animated manner, and his technical mastery and breadth of knowledge are worn lightly, both drawing the reader in and allowing him to surprise them when things take a darker turn.
Trish Ace was also a new face to me, but again I’ve been enjoying her book, First Blood, for months. We talked a little beforehand about attitudes to putting the domestic and everyday into poems, and Trish mentioned that perhaps the prevailing climate is against this, but her reading rather reinforced my view, that when it’s done well, as here, what is there to complain about? She makes connections between the personal and the wider world without signposting them or straining for significance, she distils emotion well, and she's another excellent reader.
Rob Mackenzie is another who manages to be animated without ever getting theatrical. It’s a style that suits his poems down to the ground, too, because he constantly springs surprises on you (in both style and subject matter) without ever reaching for easy, look-at-me effects. He read Concentration, one of my favourites from his chapbook The Clown Of Natural Sorrow, and his genuinely creepy At The Harry Potter Launch drew audible gasps from the audience.
For my part, I read five from Making The Most Of The Light, plus one from Winter Gifts, and a new-ish poem. The full set-list was:
1. Familiar
2. Man Overboard
3. Vocabulary
4. Poem
5. Redwings
6. At Home
7. Cure
In between times, HappenStance’s founder and all-round creative dynamo Helena Nelson read poems and talked about the experience of starting a chapbook press from scratch. I think every one of us would say we owe a great debt to her, not only for taking a punt on putting out our books, but also for her hugely supportive and instructive editing of said pamphlets.
We all told the audience a bit about our current activities and plans (more on mine tomorrow), and afterwards chatted with them while books were bought, drinks seen off, etc. If any of them are reading this, thank you too for making it an enjoyable and inspiring night.
I meandered back, via a secondhand bookshop in Penrith (£7 for two books, on 14th century poetry and medieval history), and RSPB Leighton Moss, where the wind was keeping the Bitterns and Bearded Tits deep in the reedbeds, but a very showy Great White Egret gave great views.
Posted by Matt Merritt at 15:00

Matt - great to meet you indeed. Tania is reading your book now (I read a couple more on the night, and more today) and we both thought your work is outstanding. As I said yesterday, I'd love to give your book a full-length notice in Scotland on Sunday when it comes out, so let's stay in touch - jameswood577@hotmail.com. Cheers - James

Matt, thanks for all this. The whole Carlisle trip from start to finish was so enjoyable. I'm really glad to have taken part in such a successful event. And it was great to meet up with you again again too - all down to happenstance, you might say ...

Excellent report, Matt. Good to meet you again. The whole event was a blast. So where next?

Thanks very much, James. It was lovely to meet you and Tania, and to hear you read. I re-read everyone's books yesterday (the gales gave me a perfect excuse not to leave the house), and found all sorts of new things to enjoy. I'll be really interested to see your artist collaboration, and I'll keep you informed about the book.
Thanks too, Eleanor and Rob. It was a blast, wasn't it? It's just a shame a Christmas tour isn't on the cards!

A tour! A tour! A tour! There was something magical about our reading in Carlisle on Friday night...from the Harry Potter ceiling of the cathedral to the pink and blue facade of the castle...from the pealing of church bells which accompanied the first-half readings to the warm and receptive audience scurrying home laden with chapbooks...a wonderful evening. And everybody read and spoke so well. Let's do it again! Thanks, Matt, for kind comments...

I completely forgot to mention the bells! They did add atmosphere, didn't they?
Lovely to meet you both, and I hope all goes well for Amber today.

With familiar "man-overboard" vocabulary, a poem redwings home for a cure. :-)

Congrats on the great book news!

Thanks, Andrew! There's one thing I can promise in the book - longer titles!