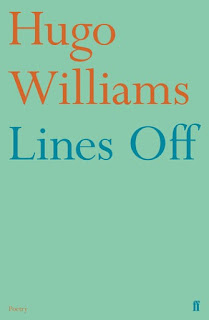 This is out any day now. I don't suppose Hugo Williams will ever be the height of poetry fashion, but he always strikes me as something of a one-off, wringing the maximum effect out of deceptively simple-looking poems. I look forward to all his collections, and this one is no exception.
Posted by Matt Merritt at 11:30 No comments:

I don't want to give his execrable book any more publicity than it deserves (ie., none), but I read another damning review of Jacob Rees-Mogg's The Victorians this morning. OK, the New Statesman was never likely to be that appreciative of the walking anachronism's hurriedly completed homework assignment (presumably the dog ate the original manuscript), but they do do the reader the favour of quoting some of the author's laborious and tedious prose.

The one part of the review I would immediately take issue with is "The one non-Westminster discussed is the cricketer WG Grace, included mainly because 'as Every Englishman knows', more than any other sport, 'cricket at its best captures the soul of the nation. Fair play, etiquette and gentlemanly behaviour.' Not much of the latter is evident in the modern game, but Rees-Mogg's perceptions, here as elsewhere, are myopically rooted in the past."

The reviewer appears to have missed the point about WG just as much as Rees-Mogg has. Dr Grace was undoubtedly a great player, a man who revolutionised batting technique in particular, but he really didn't give much of a damn about fair play, etiquette or gentlemanly behaviour. Reading about his career, it's hard to escape the conclusion that even David Warner and Steve Smith might have baulked at taking the field with such a master of gamesmanship (well, more like straightforward cheating), so the dig at the modern game is unwarranted. Nor, it should be noted, was WG alone in that respect.
Posted by Matt Merritt at 10:05 No comments:

Interesting piece in The Guardian about the election of the new Oxford Professor of Poetry. Of the three candidates, I think I'd probably go for Alice Oswald, although I can also see that Andrew McMillan would be an excellent choice. As for Todd Swift, well, you can follow the links in there to see why his candidacy has caused disquiet. You can also read this "statement from an observer" on his blog. You might be able to take a shrewd guess at who the observer is.
Posted by Matt Merritt at 16:00 No comments:

When I bought it, 15 years ago or so, I expected to find it full of all sorts of arcane insights into cricket leadership. Brearley, after all, is considered one of England's best-ever captains, the architect of three Ashes triumphs, including the miracle turnaround of 1981. He was tactically innovative and always thoughtful, and his man management skills were legendary. A trained psychologist, he was described by admiring Aussie fast bowler Rodney Hogg as "having a degree in people".

But I felt at the time that it simply stated the obvious. I came away from it with no more idea of how Brearley achieved what he did than I had at the start. Shorter articles on captaincy, from the likes of Ian Chappell, revealed far more.

But he's more than made up for it with On Cricket. It's wide-ranging and diverse, taking in controversial issues such as ball-tampering and the Basil D'Oliveira affair as well as Brearley's opinions on some of the greats of the game, and on his own career.

Above all, it's beautifully written. Packed with detail, yet clear, concise and very readable, and Brearley's own character comes through on every page. Not in the sense that he puts himself at the centre of things, just that he approaches every subject with the same inquisitive, open-minded, tolerant and thoughtful way.

And that, I realised, probably says a great deal more about the art of captaincy than anything. As a player, how could you not want to perform well for a captain like that? One who, you could be confident, would treat every team member fairly, and never put his own ambitions above the team's. Brearley may or may not be England's greatest ever captain, but he's certainly the most interesting thinker about cricket writing today.
Posted by Matt Merritt at 09:45 No comments:

Over at David Belbin's website, there's this interesting piece on new Poet Laureate Simon Armitage, and specifically his early chapbooks and his first full collection, Zoom! David has reposted his original review of them, from the excellent Slow Dancer, and it's hard to take issue with his excellent review. I've not been so keen on a lot of Armitage's more recent work, but there's still a lot to like in those early books.
Posted by Matt Merritt at 09:45 No comments:

It's fair to say that Jacob Rees-Mogg has suffered a critical mauling for his book The Victorians. Dominic Sandbrook's comment that it wouldn't have been published had it been written by anyone else is rather redundant. Of course it wouldn't – it's just an attempt to cash in on his fame/infamy, with no regard to the quality of the writing or the historical research. Rather like with Boris Johnson's biography of Churchill. I tried to read some of that, but it was really pretty awful.

I almost want to read this to see if it is as bad as they say, but I think I'll take AN Wilson's word for it. He's hardly a raving leftist, so has no particular political axe to grind, and he has himself written a generally well received and readable history of the Victorian era.
Posted by Matt Merritt at 15:39 No comments:

Digging up the past

WARNING! I've slipped into early medieval history nerd mode for this post – if you're looking for ill-informed poetry ponderings, anything remotely ornithological, or cricket geekery, please come back in a few days.

You can go months without coming across anything to do with Anglo-Saxon England in the mainstream media, and then two stories come along at once. You'll probably have already seen this story, which raises all sorts of questions about the conversion of the Anglo-Saxons to Christianity, even if they're right about the burial being that of  Seaxa, who had a family connection to a Christian Frankish princess.

But earlier today I also came across this, concerning the 'Great Heathen Army'. Essentially, it explains why previous finds at Repton, between Derby and Burton, weren't the whole story, and how finds at the nearby hamlet of Foremark suggest part of the army wintered there in 873-74.

It's an area I know well, having walked the path alongside the river many times. In fact, I saw a Red-footed Falcon there about 10 years ago (oh, there you go, knew the birds wouldn't stay out of things for long). One of the poems in my second poetry collection, hydrodaktulopsychicharmonica (my first with Nine Arches Press, back in 2010) – Dreams From The Anchor Church – was inspired by the caves along that stretch of the Trent, and by the area generally. You can still get the collection by following the link above, direct from me, or on Amazon.
Posted by Matt Merritt at 14:29 No comments: